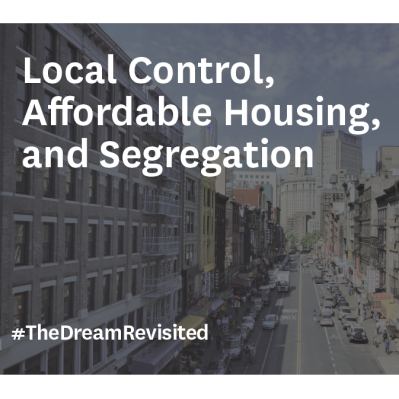 The NYU Furman Center has launched the twenty-sixth discussion in the The Dream Revisited series, an online forum of debates and perspectives on racial and economic segregation. The new debate Local Control, Affordable Housing, and Segregation, explores how local control in land use decision-making may influence the availability of affordable housing and contribute to economic and racial segregation. Featuring four essays from legal scholars, practitioners, and advocates, the new debate weighs the potential benefits and drawbacks of “scaling up” the zoning process, and moving land use decision-making towards the city, state, or regional level.

The discussion begins with the essay, A Not-So-Quiet Revolution in Land-Use Law? Scaling Up the Zoning Process to Promote Affordable Housing. Authors Roderick M. Hills, Jr. (NYU School of Law) and David Schleicher (Yale School of Law) argue that moving some decision-making authority away from the neighborhood level would put land use decisions in the hands of those who are more concerned about the overall size of the housing stock, potentially helping to prevent the hyper-local politics that can create barriers to housing construction, and keep poor and working class residents from places that offer the greatest opportunities. The authors note, however, that “moving decision-making to a higher level of government will have only limited success unless it takes the form of a firm state or citywide pre-commitment to specific levels of housing development or common state or citywide land use policies.”

Read responses to the opening essay:

On Wednesday, March 6th at 8:30am, watch the debate go live at the Furman Center Policy Breakfast: Local Control in Land Use Decisions: Implications for Affordable Housing and for Neighborhood Integration. Watch the livestream here. (Password: nyufurmancenter)

The Dream Revisited was supported in part by a grant from the Open Society Foundations. If you have any comments or suggestions for future discussions, email us at [email protected]