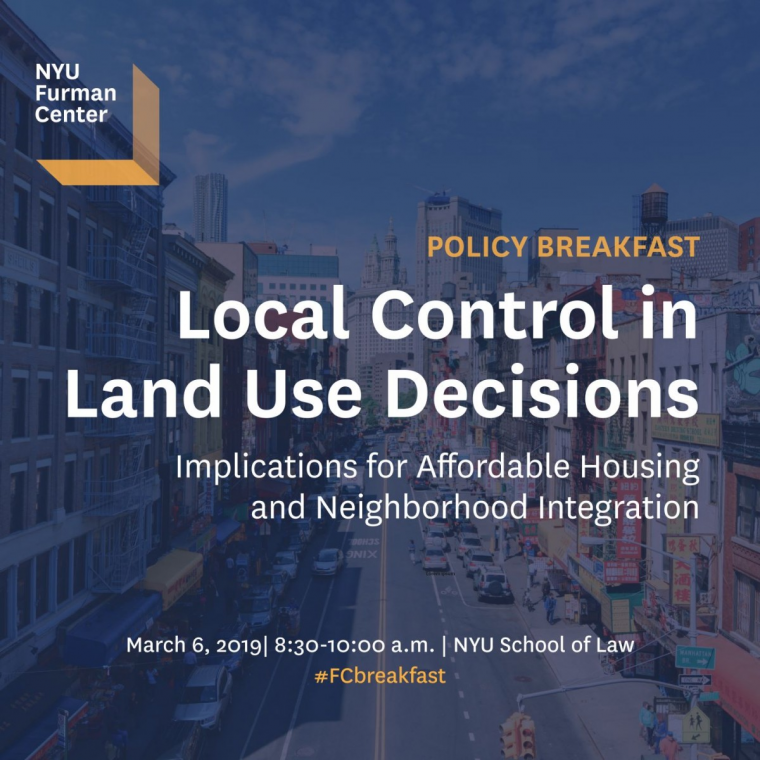 On March 6th, the NYU Furman Center hosted over 200 participants for the policy breakfast “Local control in land use decisions: Implications for affordable housing and for neighborhood integration. A diverse panel of housing advocates, legal scholars and practioners debated the benefits and drawbacks of local control, and the merits of moving land use decision-making towards the city level.  The panelists explored perspectives that were recently published in the Dream Revisited essay series, the NYU Furman’s online forum of contemporary policy debates about housing, segregation, and opportunity.

During the robust discussion, Roderick Hills described the challenges of engaging diverse stakeholders in land use decisions, and the importance of having jurisdictions balance a streamlined planning approach with optimal participation. David Schleicher raised concerns about the inefficiencies of local deference. Tying back to the Dream Revisited discussion of local control’s impact on neighborhood integration, Elaine Gross highlighted important historical and contemporary connections between local control, systemic racism, and housing segregation.

Raising the significance of balanced community participation, Paula Segal remarked that ensuring both renters and homeowners are engaged early in the land use review process is important to reflect diverse interests. John Shapiro echoed her call, and expressed the need for predictability in land use appropriations through some form of comprehensive plan.

Panelists also weighed in on how proposed revisions to the City Charter could affect land use in New York City. David Schleicher noted that charter revision to include zoning budgets could spread affordable housing equally around the city. Paula Segal suggested that community board term limits would allow younger community members, who are often renters, to have more of a voice on their community boards, which can be dominated by longer term residents who are homeowners. John Shapiro expressed that coordinating the capital budget with land use decisions would provide a more focused approach to land use.