The Enduring Legacy of Our Separate and Unequal Geography

Our connections to the world and each other have a profound influence on our perceptions, attitudes, and beliefs. It’s simple really – we are hardwired to care about the people with whom we share regular contact. We do this instinctively, with little effort, often without even thinking about it.

But empathy and compassion become so much harder at any sort of distance, even for those with the best of intentions. It is hard to walk a mile in someone’s shoes when we scarcely know the path they must travel.

One of the most painful illustrations of the power of human connectivity is our centuries-long struggle with racism in America. Racism is a disease that both creates and feeds on separation – fueling the lack of connection that in turn perpetuates it.

That racism creates separation is obvious from even the most cursory glance at American neighborhoods and schools. Black and white families who are identical in every other way routinely inhabit completely different spaces within our cities and society. And, it is exactly this separation that allows racism to persist over generations. When we are disconnected, it takes intentional effort to see each other as individuals, and it becomes all too easy to see those of another race as fundamentally different, other, inferior.

Segregation based on race would be distressing enough on its own, but when combined with our vastly unequal history it has especially dire consequences. For the separation that racism creates works to preserve the inequities experienced by each generation, passing them to the next in a way that is far too little diminished.

The following fact from Logan (2011) about the geography of race and poverty in the United States makes this point in a direct and striking way:

The average black family with an income above $75,000 lives in a neighborhood with a higher poverty rate than the average white family with income below $40,000.

And the following figure from Reardon, Fox, and Townsend (2015) illustrates this point in even richer detail, showing how median neighborhood income increases with household income for each race and ethnicity. That the line for black households lies so far below that of whites implies that black households (at every income level) live in much lower income neighborhoods – with the accompanying lower quality schools, higher crime rates, and worse access to jobs – than comparable white households. 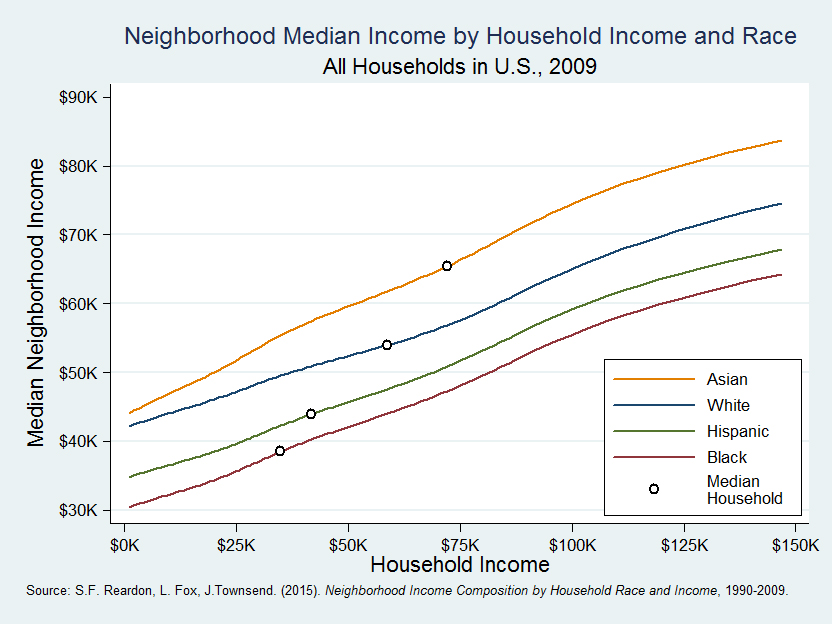 This separate and unequal geography has profound implications for both current and future generations. It forms the conditions that foster the vastly uneven application of law enforcement and criminal justice, gives rise to systematic differences in the quality of schools that black and white children attend, and geographically correlates race and poverty in a way that is difficult for many observers to tell apart, further driving racial misperceptions and racism itself.

It is precisely this powerful combination of separation and historical inequity that makes the aggregate force of racism so unequal. While any individual might hold racist attitudes or beliefs, the collective impact of these attitudes works to preserve the material advantage of those favored by history – ultimately slowing the speed with which social and economic differences dissipate over generations.

This separate and unequal geography also has profound implications for our national politics as J. Phillip Thompson develops in detail in his essay. The great distances that divide our country by race and ethnicity – city versus suburbs, rural versus urban – make it easy to exploit white racism to drive down support for a whole range of public goods and institutions. Support for these policies is undermined by presenting them as largely benefitting an undeserving other – an other that distance and ignorance make all too easy to caricature and dehumanize.

The perspective that racism and segregation are really just two sides of the same coin and that their impact is not neutral given historical inequities also has far-reaching implications for policy more generally.

It suggests, for example, that housing and schooling policies that provide ‘choice’ rather than resources naturally yield greater benefit to those who can take full advantage of the increased opportunities than to those whose choices are effectively limited by the collective action of racial sorting.

It also implies that the rush – by politicians and the courts – to declare America a post-racial society and dismantle remedies designed to protect the basic rights of African Americans is incredibly premature, whether related to affirmative action, voting rights, criminal justice, or school segregation. The impact of ‘race-neutral’ policies in the presence of ongoing racism and enduring inequality is anything but race-neutral.

And it illuminates one final point - that to continue our progress towards a truly colorblind society, policy must actively and aggressively target racial segregation wherever it appears. For the act of separating itself not only reinforces existing racial inequality but also serves as a clear and disheartening marker of the great force that racism retains in our society.

Logan, John R. "Separate and unequal: The neighborhood gap for blacks, Hispanics and Asians in Metropolitan America." Project US2010 Report (2011): 1-22. 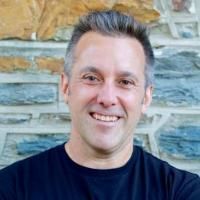 Patrick Bayer is a Professor of Economics at Duke University and Research Associate at the National Bureau of Economic Research. His research focuses on wide range of subjects including racial inequality and segregation, social interactions, housing markets, education, and crime.