The Dream Revisited: Integration in the 21st Century

The simple dichotomy of poor black cities and affluent white suburbs can no longer capture the reality of segregation in metropolitan areas in the United States.  Metropolitan areas are now home to an increasingly multiethnic population as well as a significant minority middle class, spread across a range of urban and suburban communities.  Despite the diversification of our population and our geographies, however, residential segregation based on race and on income continues to characterize both our schools and our living environments.

Both residential and school segregation based on income have risen significantly over the past two decades, at the same time as the gap between rich and poor Americans has reached levels not seen since the early 1900s.  There is growing evidence that, contrary to the cherished U.S. ideal of social mobility, disparities in wealth are ever more difficult to overcome and likely to be transmitted from one generation to the next. 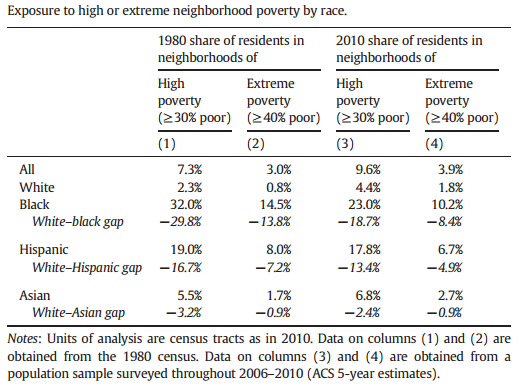 This segregation matters in concrete terms in part because access to neighborhood amenities is also unequal—African Americans and Latinos live among more disadvantaged neighbors, have access to lower performing schools, and are exposed to more violent crime than whites.  That unequal access to neighborhood resources is correlated with residential segregation, which in turn is correlated with negative effects on well-being:  indeed, as levels of metropolitan segregation increase, the gap between whites and African Americans on measures of health, employment, educational outcomes, access to financial services, and opportunities to build wealth also rises.  In a landmark article that continues to be confirmed by more recent research, David Cutler and Edward Glaeser found that after controlling for socio-economic status and other factors, “a one standard deviation reduction in segregation eliminates approximately one-third of the difference between blacks and whites” in high-school graduation rates, unemployment, earnings, and single parenthood.

There has been far less research documenting the effects of segregation on non-black minorities, however, and little work on the overall costs of segregation to society.  Further, despite years of research on these issues, it is not always clear what mechanisms connect segregation to inequality or what interventions can increase access to opportunity.  Should the goal be more equal opportunities to choose among a full range of housing and neighborhoods options?  Mathematically racially integrated neighborhoods?  Access to equal opportunities in neighborhoods that are predominantly minority?  Is the solution greater enforcement of existing fair housing regulations?  The removal of local zoning and regulatory obstacles to more integrated communities?  A more robust and better designed housing voucher program?  Greater investment in low-income communities of color?

The purpose of this blog is to create a forum for thoughtful debate on the causes and consequences of racial and economic segregation in neighborhoods and schools.

The first post asks what “integration” means, the extent to which integration itself is the goal (or under what circumstances attempts to integrate neighborhoods would be desirable or undesirable), and why.