Three aspects of Phil Thompson essay immediately and strongly resonate for me.  First is his clear, and I believe, well-founded apprehension that we stand on the verge of a serious wave of American neo-fascism. Donald Trump’s victory in the recent presidential election ushers into power a dangerous demagogue with no real experience with or commitment to democratic institutions and processes. Instead, he is a man of privilege, entitlement, and a long history of discrimination and exploitative dealings with real working people. The anger and intolerance of many of his most ardent supporters, when joined with Trump’s profound disregard for democratic norms and procedures do not bode well.

Moreover, as long as we still live in a racially segregated nation the fortunes of black and Latino communities will lack an obvious and tight connection to the fate of white communities. Individuals will thus continue to form their sense of personal and larger political interests in a manner heavily structured around boundaries of race. Race will inevitably remain one of the principal levers of political motivation and action in America.

These two developments would be less worrisome if empathy was in great abundance in the American mass public. But in the context of rapid social change, worsening economic inequality, and a material sense of shrinking opportunity and mobility, empathy—a willingness to put one’s self in the other person’s shoes—has been in short supply. Instead, we inhabit a political climate where a presidential candidate denounced an entire national origin group as “rapists”, “murderers”, and “drug dealers”; where that same candidate called for building a wall against a long standing neighbor and ally and elicited deafening howls of support; where this same candidate raised the possibility of excluding from entry to the country all the members of one of the world’s great religious traditions; where the very same candidate routinely belittled and even bragged of assaulting women; and where despite this stunning collection of outrages and more this candidate rose to be freely elected to the highest office in the land. No, empathy would indeed seem to be in exceedingly short supply.

If I dissent from the analysis Phil Thompson has given us, and it is a rather modest dissent, it concerns his insistence on the central importance of the white working class. This be-speaks a mistaken analysis of what happened in the 2016 election and of what ought now be the strategy for the years ahead. Hillary Clinton did not lose because the white working class turned on her with special force. I see those defections as at least no more significant than those that occurred in the case of Jimmy Carter in 1980, or Walter Mondale in 1984, or Michael Dukakis in 1988. The problem, as Thompson put it, is that: “Clinton could not credibly remake herself as a champion of ordinary working people.”

We should all be acutely mindful that Hillary Clinton won the popular vote by a substantial margin yet made strategic errors that cost her the Electoral College. Indeed, the actual vote margin across the three states of Wisconsin, Michigan, and Pennsylvania was so exceedingly small that it is fully explained by lower African American turnout and support among those who did turnout in just 3 cities alone (relative to Obama’s 2012 performance): Milwaukee, Detroit, and Philadelphia. The story of 2016 is not some new rebuke to Democrats or to a progressive coalition coming from the white working class. Not at all. It is, in my assessment, the failure of a democratic nominee to effectively claim and excite the full multiracial coalition—black, white, Latino, Asian and more—that elected Barack Obama in 2008 and comfortably re-elected him in 2012. Guarding against a repeat of that failure is what should concern us most. To wit, a candidate with a robust, top line, front and center economic message and credible profile as a critic of Wall Street, the Big Banks, unchecked corporate power, and the top 1% is the real remedy.

Yes, there is work to be done to assure that working and middle class whites do not see their fates as weakened by a demographically changing population or by better opportunities and fuller inclusion of African Americans, Latinos, and Asians. Neither special coddling of the white working class nor continued marginalization of the legitimate aspirations of minority workers are the answers. Still, it is exactly the sort of personal engagement in multiracial collaborative efforts, truly working together for the common good, that Thompson calls for is what we most urgently need. Yet the racial segregation that continues to characterize our nation may just get in the way. 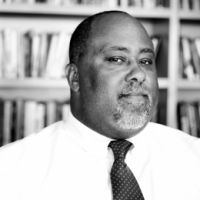 Lawrence Bobo is the W. E. B. Du Bois Professor of the Social Sciences at Harvard University. He holds appointments in the Department of Sociology and the Department of African and African American Studies. His research focuses on the intersection of social inequality, politics, and race.