Politics in a Racially Segregated Nation

The white working class spoke up on Nov. 8th to say that they’ve lost confidence in the leadership of both political parties. Their opinion did not hinge on Hillary Clinton’s or Donald Trump’s policies; Trump did not even articulate discernible policies. The white working class voted on the declining quality of their lives and resentment from a history of failed promises. Trump promised to blow up Washington, and most white voters supported him in doing so. White working class activism could someday open up political space for beneficial forward-looking change; but it will be disastrous if neo-fascism instead fills the void. Some feel that the word “neo-fascism” cannot be applied to the U.S., given the vaunted strength of liberal democracy. I am among those who think that legalized racial segregation was a form of neo-fascism, so a renewal of neo-fascist policies is quite thinkable. Trump’s flirtation with the far-Right is, by my lights, a grave concern.

What happens next largely depends on the orientation of the white working class towards blacks, Latinos, and other non-white, and non-Christian workers.  What is their current orientation? In spite of the many questionable opinion polls that have prompted naïve proclamations of white racism’s demise, I tend towards a long historical view. I agree with W.E.B. Du Bois that capitalism created not one, but two, proletariats: one of color, and the other white. The white proletariat was accorded the privilege of not being enslaved and the duty to police non-whites via regular (police, military) and irregular (Klan, militia) means, and the honor of rubbing elbows with wealthy whites in restaurants or in the ‘White Only’ sections of trains. This type of racial repression was constitutive of capitalism, of American democratic institutions, and also of citizen identities. Repression fosters in human beings a lack of empathy for those whom you repress—hence protest slogans like “Black Lives Matter,” and, “Ain’t I A Woman,” and, “I Am A Man.” Absence of empathy for non-whites is the living White Supremacist legacy. For many whites, such as those who found it impossible to accept Barack Obama as their President, Whiteness goes to the heart of what it means to be an American. This is not only true of the Right. The U.S. labor movement, for example, has never embraced the U.S. ante-bellum anti-slavery movement as a labor movement (as if slavery was not about labor). Doing so would mean that abolitionism and the Civil War were milestones in their history; that Harriett Tubman and Sojourner Truth were their labor leaders. It would force them to face up to the white male domination of labor’s identity. Few labor unions have engaged these issues, which helps explain the contemporary orientation of white workers. White workers may have moved past Jim Crow expressions of racism, but a majority display little regard for the lives of blacks, Latinos, Muslims – those, who along with others, are most directly threatened by Trump’s election.

Racial segregation perpetuates White Supremacist identity and blocks unity amongst working people. NAACP lawyers argued in Brown v. Board of Education (1954) that segregation, “chilled the development in the South of opinion conducive to the acceptance of Negroes on the basis of equality.” There is little reason to doubt that they were right. De facto segregation of public schools continues to thrust aside the critical democratic experience of learning and conversing with racial Others during the formative years of human and citizen development. Racial segregation in housing provides little opportunity for whites and blacks, Latinos, Muslims, and others to know each other. In the absence of personal familiarity with the Other, stereotypes often take hold. Workers are less likely to recognize commonalities in their values – concern for family, respect for hard work, willingness to help others – with those of other racial groups and religions. This social distance is easily transferred into scapegoating and divisive politics.

White workers are unhappy on three points: capitalism led by Wall Street has failed them; politicians of neither party represent ordinary working people; and for some, blacks, Latinos, and Muslims (maybe Jews too) are threatening to Whites and must be controlled.

During the election, Trump gave voice to all three complaints. But Clinton could not credibly remake herself as a champion of ordinary working people. Nor did her campaign seize on Trump’s racism to mount strong field operations in black communities. This left many black activists with the strong impression that Clinton took black voters for granted while chasing white workers moving to the Right – a longstanding complaint that began with Bill Clinton. Clinton came to symbolize the fact that economic hurt in America stems from a structural problem – a ‘pay-to-play’ politics that endangers democracy. While Wall Street ideally rewards promising entrepreneurs and efficiently run businesses, and is supposed to spread risk across sectors and geography, its focus is on making short-term profits for investors (and themselves). Workers no longer trust Wall Street to self-regulate or to ensure economic prosperity for the majority. Workers aren’t wrong: the not-so-surprising result of financial de-regulation and loosening of campaign finance regulation has been a spectacular leap in the wealth and political importance of the financial sector, while income has declined for workers and investment in education, workforce training, infrastructure – things that don’t generate quick payoffs but really could make America great – has languished. At the same time, widening segregation by income has meant that economic and political elites are less and less likely to share their neighborhoods and their neighborhood schools or infrastructure with working class or middle class households.

What is Needed to Advance Democracy?

Remarkably, some of the most hopeful notes concerning American democracy have been sounded by black leaders, from King to Obama, arguing that the arc of history bends towards justice. Their confidence in ultimate justice is not based on historical precedent—neither they nor we have experienced a nation or world full of social justice—but they have Dewey-like faith that whites, blacks and others will recognize their common humanity via personal engagement in working together. Along this line, there are several promising movements across the country embracing what I call, “morally based organizing.” The Service Employees International Union (SEIU), for example, began a racial justice engagement program among its members two years ago, where workers in inter-racial gatherings described the problems they saw, invited speakers, read materials, and held focused small group conversations about how to make change. There have been many positive results: SEIU’s mostly white correction officers in Michigan supported (mostly black) prison inmate protests earlier this year; 80 percent of SEIU members voted for Clinton, by contrast almost half of AFL-CIO members voted for Trump.

With White Supremacist nationalism on the rise, it is critical right now to engage working people across race in morally-based organizing: deliberations (schools of practical democracy) about questions that go to the contested fundamental underpinnings of politics: ‘who should be allowed to live in this country;?’ ‘do we want to live together, or racially segregated;?’ ‘what kind of economic opportunity must we create for working people;?’ ‘how can we make sure government represents the people?’ How to convene the public when the majority (including a majority of blacks and Latinos) is dispersed in segregated suburbs is a pressing practical issue. What is clear is that out of these deliberations must come immediate actions to save and change democracy. 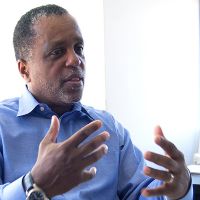 J. Phillip Thompson is an Associate Professor of Urban Planning and Politics at MIT. Before entering academic life, Thompson worked as deputy general manager of the New York City Housing Authority and as Director of the Mayor’s Office of Housing Coordination. His most recent book is Double Trouble: Black Mayors, Black Communities, and the Call for a Deep Democracy.