The experiences of ArchCity Defenders’ clients reinforce a message which has echoed through generations - it is dangerous and a crime to be a poor, black person in a neighborhood that is, by design, majority white. No one knows this more acutely than a woman who we’ll refer to as Ms. C., a 26-year-old African American mother, who worked a minimum wage job at the Wal-Mart in Maplewood, Missouri - a wealthy St. Louis suburb in which she could not afford to live.  Her exemplary work ethic earned her a promotion, a raise, and placed her on a fast-track to become an assistant manager.

One evening, on the way to work the night shift at Wal-Mart, Ms. C. was stopped by an officer who had on an earlier occasion ticketed her for having an unregistered vehicle. She had already parked and exited her car, but the officer ordered her back into her car. Ms. C. complied with his order, all the while desperately attempting to explain that she had her tags and proper insurance.

When Ms. C. tried to reach toward the tags to show them to the officer, he grabbed her left arm, dragged her out of the car, and slammed her against the vehicle. Ms. C. was arrested for unpaid traffic tickets and taken to the Richmond Heights jail. Ms. C. recalls the feeling of helplessness - she was “in their world now.”

A $1,000 bond was set for Ms. C. Although she worked full-time at Wal-Mart, the  bond amount was nearly impossible to furnish. Ms. C. was only released after her husband and church pastor scraped together the $1000 demanded for her release. But more than just losing the $1000 that night, Ms. C. was fired from her job at Wal-Mart for missing work the night she was arrested. For Ms. C., as for many other poor and black people, the steps she had taken toward economic stability were obliterated in a process that begins with alleged minor traffic violations, and quickly transforms into a never-ending cycle of jail, debt, and humiliation.

For black residents of St. Louis, like Ms. C., suburbanization has not marked the end of segregation, but rather the beginning of a new chapter in the region’s history of profound racial division and oppression. Even after the civil rights victories of the 1960’s, St. Louis remained highly segregated, and as of 2010, the city remained the ninth most segregated in the country. Municipal police, courts, and jails operate in concert to exacerbate black poverty and harass black people who dare to intrude into white neighborhoods.

As advocates for indigent defendants, ArchCity Defenders has observed the havoc St. Louis’s fragmented municipal structure wreaks on the lives of our clients, and the way it reinforces historical patterns of segregation. Until this highly localized, predatory and discriminatory legal system is abolished, St. Louis will remain deeply divided.

St. Louis County is comprised of 91 municipalities, 81 of which have their own court systems and 57 of which have their own police force. This structure did not evolve by accident, but is, as E. Terrence Jones has observed, “fragmented by design.” Dating back to the Great Migration, white residents of the city have implemented a series of strategies to exclude the substantial black population in St. Louis from white neighborhoods. Local incorporation, like legally enforced segregation, restrictive covenants, and redlining, emerged as another “peculiar institution” that functioned to sustain and further entrench racial separation in St. Louis. Between 1940 and 1960, the number of municipalities in St. Louis County exploded from 35 to 95, in the face of other overtly discriminatory practices being ruled unconstitutional or prohibited by statute.

Once incorporated, municipalities could independently enact zoning ordinances that preserved existing residential patterns and forestalled developments that would challenge the color and class of a neighborhood - by, for example, prohibiting multi-family housing and specifying minimum lot sizes. Black neighborhoods, by contrast, were generally under-zoned and unincorporated, and often surrounded by commercial and industrial zones to geographically trap and segregate the black population.

But as black residents of St. Louis trickled into predominantly white suburbs following the civil rights victories of the 1960’s, white residents fled those suburbs for the less accessible, whiter neighborhoods to the south and west of the city. For the municipalities to the north of St. Louis, the departure of the tax base, the subprime mortgage crisis, and the costs of sustaining municipal courts and police forces have resulted in financial crisis.

Suburbs like Ferguson responded by using police departments and municipal courts to collect money through traffic citations and enforcement of the municipal code. Thus, between 2010 and 2014, revenue from traffic tickets and fines increased by 50 percent and Ferguson collected approximated $10 million from its poorest citizens. To ensure that poor black residents pay the attendant exorbitant courts costs and fees, Ferguson unconstitutionally and routinely jailed those who failed to pay, without inquiry into their financial means, forcing the city’s poorest citizens to sacrifice money for food, diapers, clothing, and rent to pay off their penalties for minor offenses.

In February 2015, ArchCity Defenders sued the City of Ferguson and its neighboring city, Jennings for unlawfully jailing people who could not afford to pay minor tickets and court fees, essentially for running modern day debtors’ prisons. In August 2016, ArchCity Defenders simultaneously sued thirteen additional towns in North St Louis for using one jail as a hub to operate another debtors’ prison scheme.   The predatory practices of racial profiling, over-policing, over-ticketing, arresting and jailing people who cannot afford to pay minor tickets  have persistently violated people’s civil liberties and jeopardized their homes, vehicles and jobs.

Elsewhere to the south and west, St. Louis’s localized legal structure provides an apparatus for excluding black homeowners, commuters and workers from white municipalities - people like Ms. C. In Ladue, which is more than 99 percent white, a black driver was 18.5 times more likely to be pulled over than a white driver, 2.4 times more likely to be searched, and nearly 3 times more likely to be arrested in 2014. In May 2015, the city’s former police chief described a conversation with the former mayor in which she directed him to target black drivers so that “those people’ can see what happens to blacks and that we don’t want them here.”

Even as black residents have moved into the suburbs, the region’s fragmented governmental structure has perpetuated St. Louis’s historical separation of white from black, wealth from poverty, and opportunity from joblessness. To the north of the city, black neighborhoods are economically oppressed by the municipal police forces and court systems that, from their inception, existed to exclude the families that now comprise their constituency. To the south and west of the city, municipal government actors engage in exclusionary practices that nurture white fears of racial integration. Without consolidating the municipal court system, St. Louis will remain deeply divided. 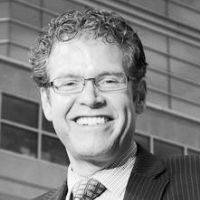 Thomas B. Harvey is the Co-Founder and Executive Director of ArchCity Defenders, a non-profit civil rights law firm in St. Louis, Missouri.