Focus on the Costs of Segregation for All

Does the pursuit of integration stigmatize black people?  Does it, as Mary Pattillo suggests, “posit proximity to Whiteness as a solution” to the problems of urban, poor black people?  This a tough question.  One which must be confronted if we are to understand how and why segregation plays such an important role in reproducing the poverty and educational inequality 60 years after the Supreme Court’s landmark embrace of integration in Brown v. Board of Education.

Like Dr. Pattillo, I too experienced firsthand the policies that school districts implemented in an effort to live up to the promise of Brown.  I was bused to school far from home beginning in kindergarten. My Queens, NY high school was a veritable United Nations.  About 40 percent of the students were black, 40 percent were white and the other 20 percent were Latino and foreign students, children of diplomats from Indonesia, Malaysia and other Asian countries, who lived in nearby neighborhoods.  Unlike Pattillo, I recall a richly integrated life of school activities.  My sister and I participated in all the annual school musicals – from Brigadoon to Lil Abner – fully integrated productions with alternative casting and interracial romantic leads.  For the two years I edited the yearbook, most of the yearbook staff was white.  Our senior class president was black.  Black students seemed to thrive at our high school, and racial tension seemed to be a minimum.

Still without question, school was the only part of our lives that was racially integrated.  When we left school for the day, we abruptly returned to our segregated lives.  And while black students may have prospered at our school, our segregated communities did not.  Precious little investments were made in our communities.  Family-owned stores struggled but failed to stay in business, lacking the inherited capital and well-resourced social networks of white families in other parts of the city.  Moreover, redlining and other discriminatory policies by the federal government, banks, and mortgage companies deprived aspiring neighborhood entrepreneurs of credit and starved the community of commercial investment.  Without small businesses and the jobs they produced in our community or other opportunities beyond it, drug dealing and petty crime became the principal employment for young adults.

Over the next thirty years, we made some progress, but ongoing racial discrimination continued to deprive our community of opportunity.  Worse, economic stagnation drove housing prices down.  Then the recent housing crisis dealt the final blow.  Like hundreds of other families, the assets that our parents had so proudly acquired and invested in were siphoned off by predatory and regressive economic forces.  The combined processes of disinvestment, exploitation, and neglect were made easier and more complete because of how segregated our community was.  While I and many of my classmates left for college without looking back, the children from poorer families lost important social networks and supports with the loss of the more economically secure members of the community. And in all too many communities, recent decisions by federal courts have made it more difficult to continue the integration programs that were available to me and my generation.

The harms experienced by the children of families who remain trapped in these low-poverty, hyper-segregated neighborhoods have been starkly documented in recent research by Patrick Sharkey and others.[1]  Indeed, there is mounting evidence that exposure to violence in very poor communities is akin to missing an entire year of school.  A recent Century Foundation report found that if you take children who live in public housing and randomly assign them to economically integrated schools, you can reduce the achievement gap.  For poor students who finished elementary school in economically integrated schools, the achievement gap was cut in half for math and by one-third for reading.[2]

And what about white students and communities – the most segregated of all racial and ethnic groups?  Focusing on the benefits and burdens of integration and segregation for blacks and other racial minorities concedes Pattillo’s critique, without challenging its premise.  The truth is we are only considering a portion of the available information to gauge integration’s value. We must also assess whether whites benefit from integration.

Consider the findings of Dr. Kenneth Clark who, along with his wife Mamie, conducted the famous “doll tests” that laid the foundation for the Clarks’ findings that segregation damaged the self-esteem of black students.  The Clarks’ findings were noted by Chief Justice Earl Warren in Brown for the proposition that segregation may confer upon black students “a feeling of inferiority…that may affect their hearts and minds in a way unlikely ever to be undone.”[3]   But as Nat Hentoff noted in “The Integrationist”[4] -- his essay about the impressive and ambitious work of the Clarks -- “Clark was somewhat disappointed that the Court, in citing his research, had ignored two other points he had made:  that racism was as profoundly American as the Declaration of Independence, and that school segregation twisted the personality development of white as well as Negro children.”  In essence, the potentially negative effect of segregation on white students, and thus conversely the benefits of integration to white students was jettisoned early on as a foundation to support the project of integration. I suggest that we return to that course of study now.

I propose that integration may have two critically important benefits, neither of which rest on stigmatizing “blackness” as a problem to be solved.  The first, as stated above, is recognizing how school integration benefits white students.  Consistent with the Clarks’ early work, more recent research by Gary Orfield and others has shown that whites who attend integrated schools and learn in integrated classrooms exhibit more cross-racial understanding.[5]  Students who attend integrated schools also demonstrate an increased sense of civic engagement and are better able to realize the existence and effect of discrimination on other students.  This heightened sensitivity to the treatment of others helps students make decisions not based on stereotypes. The work of Linda Tropp and Thomas Pettigrew also finds that interactions between different groups reduce conflict and prejudice.[6] Thus the benefits for whites, and for our society as a whole, must be a part of the conversation.

Second, we should also recognize the pragmatic reality that housing integration may be the most foolproof way to ensure the equitable allocation of public services and development dollars for black children and families.  Over seven decades after Brown, the quality of a school remains largely dependent on its students’ race and socio-economic status.  Because the problems in our nation’s schools are integrally affected by race and class, we won’t solve our education crisis without solutions that are race- and class-conscious.  Housing and neighborhood economic development are key elements driving class mobility for all Americans. Schools cannot perform in isolation; they need healthy communities with adequate housing, jobs, safe streets, and political institutions that are inclusive.  In most inner cities, we have failed on every one of those essential requirements.  School funding based on property taxes has ensured that poor school districts will be underresourced.[3]  We must and should shore up the economic stability of black communities.  But integration can also help ensure that black families and children receive their fair share of public dollars and support.  We needn’t embrace only one response to address our failures.  But we must address with renewed vigor those failures that threaten to unravel any sense of overarching community or mutual respect and that, in the long-run, could undermine our nation’s survival as a democracy.

[1] Patrick Sharkey, Urban Neighborhoods and the End of Progress Toward Racial Equality (2013). 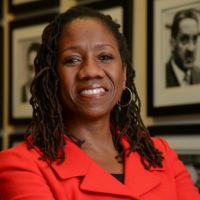 Sherrilyn Ifill is the President and Director–Counsel of the NAACP Legal Defense and Educational Defense Fund, Inc. and teaches at University of Maryland Francis King Carey School of Law.