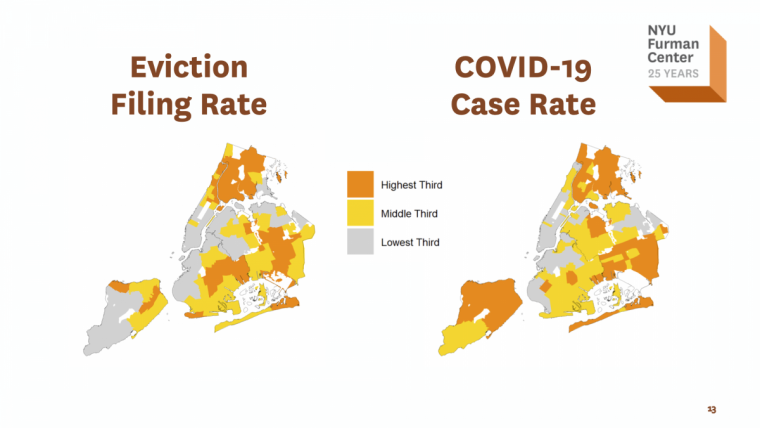 A new report from the NYU Furman Center shows that eviction filings in New York City continued their dramatic decline over the last two years and are down nearly 30 percent from 2013. Researchers point to a strengthening economy and state and local policies protecting renters as likely factors contributing to the drop. They also note the possibility of a spike in filings later this summer due to the economic shock of COVID-19. At the neighborhood level, areas with disproportionate shares of Black and Hispanic residents see 2019 filing rates nearly seven times higher than those in whiter areas. At the extreme, in the most impacted zip codes, nearly one in four households face the prospect of eviction.

In addition to its Focus on Eviction Filings, the State of New York City’s Housing and Neighborhoods release also contains citywide analysis and findings related to renters, homeowners, and construction across the five boroughs. It concludes with a detailed statistical reference guide for each of New York City’s 59 Community Districts, available at furmancenter.org/neighborhoods.

LAUNCH EVENT: To mark the launch of the report, the NYU Furman Center is hosting a virtual event, By the Numbers: Focus on Eviction on Tuesday, June 16, 2019 at 1:00pm ET.

At the event an expert panel will discuss the data on New York City eviction filing trends between 2010 and today, and explore how cities can prepare to address the challenges faced by renters, landlords, and housing courts when eviction moratoria end.