Race, Justice, and the Matters of Black Lives

The ongoing protests in Ferguson, Missouri in the wake of Michael Brown’s killing and the Grand Jury decision not to indict white police officer Darren Wilson, have shone much needed light on the patterns of U.S.-based racial antagonisms. Antagonisms best describes the deep-seated and frequently violent tensions concerning race and justice in America.[1] This case and the resistance it inspired have occurred within the long shadow of racial hostility and indifference, defining features of African American experience.

Mollenkopf and Swanstrom have written a thought-provoking commentary that suggests we give patterns of metropolitan development within cities greater attention in unpacking the significance of what they call “the Ferguson moment.” In other words, place and space matter as much if not more than race in understanding these events. I would offer a few points that intersect with Mollenkopf and Swanstrom’s insights and others that present a different reading of the circumstances of Black life. Where they err is in their discounting of race as a continuing central factor in the processes of structural suppression they highlight. I argue that anti-Black policymaking has been the rule in American society, not an accidental or “old-fashioned” feature, but one that is continually reshaped and which guarantees certain material outcomes from a devaluation of difference.

Civil society—lawmakers and ostensibly law abiding citizens—has historically upheld a logic that linked blackness with poverty, ghettos, inadequate housing, and poor education. That these have become synonymous with Black life in the U.S. has established a baseline expectation of Black social deficiency, and thus making a notion of Black “success” exceptional. Even when African Americans effectively engage in the electoral process, a right that many fought and died to achieve, it appears new forms of disenfranchisement have emerged in the form of Supreme Court gutting provisions of the Voting Rights Act and active efforts of voter suppression.[2] Not only have Black people been forced to live on the negative side of most social indicators of wellbeing, America has shown its ability to expand, grow, and develop with said inequity in tow.

As the authors point out, the city of Ferguson has tried to make up for revenue shortfalls through fines and fees generated by writing tickets for a variety of civil violations. The targeting of Black residents for these violations entangles them in whole spiral of further collateral consequences--a simple traffic stop can lead to losing a license to losing a job or worse and generally further marginalize Black residents from civic and political participation.. However, Michael Brown was not approached and killed over traffic violations, or for allegedly robbing a nearby store.  He was killed because he was Black and “threatening” to a white police officer wielding the power of a lethal weapon and badge of legal authority.

In analyzing the racial and class dynamics governing Ferguson, the authors write: “Race adds to the toxic mix. Police systematically target those who look poor, often black people, because they know they are more likely to have an outstanding warrant – and arrest provides additional opportunities to pile on more court fees and fines.” The authors position race as an add-on, not as the salient feature that the police observe. “Poor” describes an economic standing, but does not always translate visually. Poor people can present themselves in a variety of forms. By contrast, blackness is a highly visible marker, and as a result African Americans suffer the brunt of any profiling, regardless of their actual economic position.  Although poverty is often used in economic terms, it can describe political circumstances as well. Middle- and working class Black people across the country also experience political impoverishment in that their rights are often suspended instead of protected.

In this context, race need not be made secondary in order to observe the structural and often deadly dimensions of inequity. Race is central to the structure of contemporary U.S. society. This current movement for justice is rooted in a long history of racial oppression. New forms of anti-Black structural arrangements deprioritize Black peoples’ demands for social advancement.  Government policies have supported segregation in housing and education, two essential platforms for advancement. Rewarding residential segregation through “white flight” and restrictive covenants, alongside white backlash to calls for racial redress, and the consolidation of white civic identity and political power under President Reagan, also helps explain how indifference to longstanding Black suffering and limited aspirational achievement was institutionalized. This unfortunately has not only persisted but hardened in the decades since the passage of historic Civil Rights and Voting Rights legislation, which were necessary but did not go far enough.[3]

Rather than end with a view of the current energy emerging from Ferguson and other epicenters as “fighting the last war,” more traction is gained when we consider current struggles as part of the unfinished agenda of civil rights. One of the unintended consequences of civil rights advancement was that by outlawing segregation it signaled that those institutions and individuals who sought to uphold such practices would have to do so with greater discretion. Ferguson draws attention to some of localized practices of suppression that have gone unaccounted for or easily forgotten. The lessons of race and racism are still being learned sixty years after Brown, and fifty years after Selma. This paradox – how a society advances on some fronts while actively resisting fundamental changes on others – is one that too few Americans are willing to admit, much less engage.

The Black youth-led, trans-generational, multi-hued activism in Ferguson, New York, Oakland, California and elsewhere under the banner “Black Lives Matter,” is not misguided, myopic, nor lacking in awareness of the historical roots, government policies, and persistent patterns of inequity and injustice. Enveloped in the vocalized and bodily dissent of this movement one finds deep historical memory, keen insight into gendered forms of antiblack violence, and firm resolve to challenge the injustices of the status quo in hopes of a liberated future.

[1] See Frank Wilderson, Red, White and Black: Cinema and the Structure of U.S. Antagonisms(Duke UP, 2010).

[3] See Gary Orfield and Erica Frankenberg, “Brown at 60: Great Progress, a Long Retreat and an Uncertain Future,” The Civil Rights Project, May 15, 2014. 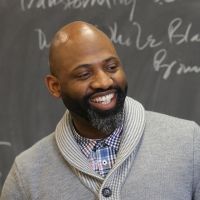 Christopher M. Tinson is an Assistant Professor of African American Studies at Hampshire College. He tweets at @dahktin.

More in Discussion 11: Explaining Ferguson Through Place and Race