The Ferguson Moment: Race and Place

The shooting of Michael Brown, an unarmed black teenager, by a white police officer in Ferguson, Missouri, set off a series of peaceful protests and violent riots that reverberated across the nation -- and even the world. The media has largely viewed the turmoil in Ferguson through a racial lens.  A half century after the legislative triumphs of the civil rights movement it seems as if race relations are as bad as ever. And if old-fashioned racism drives the injustices in Ferguson, then the solutions are clear:  enforce civil rights laws, register black voters, take power away from entrenched white political elites, and administer the law fairly.

These steps are necessary, of course, but they are not sufficient for addressing the racial injustices that were exposed by the turmoil in Ferguson.

What upholds racial inequality now is not so much person-to-person discrimination but the tangled web of race and class embedded in metropolitan development patterns. 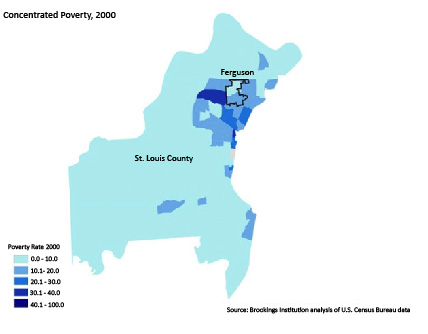 Ferguson has a poverty rate of about 22 percent (2008-2012 ACS); on the eastern edge of the town, where the protests took place, the rate exceeds 33 percent. (Ferguson is hardly the poorest municipality in St. Louis County; in fact, 17 other municipalities have higher poverty rates.) With per capita assessed valuation at only about one-third of the County average, Ferguson is locked in a fiscal cage:  if it increases tax rates (to raise revenues to meet needs), it will drive home values down further; but if it does not increase tax rates, it will slowly starve municipal services and the schools.

Fiscally stressed suburbs in St. Louis have tried to finesse this dilemma by turning to alternative sources of revenue.  Amazingly, over one quarter of Ferguson’s budget comes from traffic fines and court fees.  Systematic police and judicial practices in poor St. Louis suburbs are balancing their city budgets on the backs of their most vulnerable citizens (Balko; Arch City Defenders).  Police issue tickets for everything from illegal turns, to driving without insurance, to loud music and “saggy pants.” When citizens fail to appear in court because they don’t have the cash to pay the fines, a warrant is issued for their arrest. In 2013, the Ferguson’s municipal court— serving a city of 21,135 people — issued 32,975 arrest warrants for nonviolent offenses. Trapped in an oppressive legal system without a lawyer, people often end up losing their right to drive, their jobs, and their freedom.  With good reason, critics have compared it to debtors’ prisons.

Race adds to the toxic mix.  Police systematically target those who look poor, often black people, because they know they are more likely to have an outstanding warrant – and arrest provides additional opportunities to pile on more court fees and fines.  Add the fact that 50 out of 53 police officers in Ferguson were white (in a city that is two-thirds black) and you have an explosive situation that goes a long way toward explaining the anger that erupted in the protests and riots.  Relatively poorly paid and poorly trained white police, who usually do not live in the community, treat peaceful citizens in a remarkably disrespectful – and sometimes, as in the case of Michael Brown, a remarkably brutal – manner.

Race is not the main driver of these oppressive practices.  With an all-black city council, black mayor, and majority black police force, the nearby city of Berkeley engages in the same practices as Ferguson, last year generating $111 in traffic fines and court fees per resident and issuing 5,504 arrest warrants (Balko).

Whites are also harassed by distressed suburban municipalities. Since one of us (Todd) moved to St. Louis thirteen years ago, he has received a number of minor traffic violations with excessive fines from small municipalities. Todd’s solution is simple:  He hires a lawyer; the lawyer plea bargains the ticket down to a nonmoving violation so there are no points against his driver’s license; he pays the lawyer about $120 and an inflated fine, say $150, and goes on with his life.  It’s expensive but low stress.  If you are poor and can’t afford a lawyer, however, you can be pulled down into a vortex of fines, arrest warrants, and even imprisonment.

To suggest, as the media and many activists do, that Ferguson’s turmoil is rooted in old-fashioned racism misses important points.  Electing blacks to Ferguson’s city council and hiring more black police officers will help, but it will not address the underlying cause: the growth of concentrated poverty in the suburbs.  Not only are the suburban poor isolated from opportunity, like the central city poor, but they also face weak governmental and civic institutions that deepen their disadvantage (Weir).

Addressing the underlying causes of the unrest in Ferguson will require changing the regional patterns of inequality.  As we argue in Place Matters, the metropolitan playing field is tilted toward suburban sprawl and urban and inner suburban decline. Governments in the St. Louis region subsidize the flight of middle-class, largely white, families out of the older parts of the region by building highways rather than public transit and giving tax breaks for jobs to decentralize. Exclusionary zoning regulations that outlaw apartments or require large lots for single-family homes prevent poor families from following jobs to opportunity-rich suburbs.  These laws need not mention race in order to promote racially disparate outcomes. Because of longstanding, state-sanctioned discrimination against African Americans in job markets and education, they tend to be poorer and therefore economic discrimination by exclusionary zoning effectively becomes racial discrimination.

Generals are notorious for “fighting the last war.”  Our concern is that we will make the same mistake in responding to events in Ferguson.  In fact, the passage of civil rights laws ended the last war; we won the battle against state-sanctioned racial discrimination. Listening to the coverage of events in Ferguson would make you believe that the civil rights movement failed – that people are as racist as ever. No doubt subtle and subconscious racism still exists.  But the underpinnings of racial injustices today are metropolitan development patterns rooted in a tangled complex of private practices and public policies.  We need new strategies and tactics for a new war.

Logan, John R and Brian Stults, The Persistence of Segregation in the Metropolis:  Findings from the 2010 Census, Census Brief prepared for Project US2010, 2011, http://www.s4.brown.edu/us2010/Data/Report/report2.pdf.

Weir, Margaret, “Creating Justice for the Poor in the New Metropolis,” in Clarissa Hayward and Todd Swanstrom, eds., Justice and the American Metropolis (Minneapolis, MN:  University of Minnesota Press, 2011), pp. 237-256. 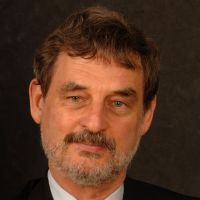 John Mollenkopf is a Distinguished Professor of Political Science and Sociology at the CUNY Graduate Center and Director of its Center for Urban Research. He tweets at @mousam.

Todd Swanstrom is the Des Lee Endowed Professor of Community Collaboration and Public Policy Administration at the University of Missouri-St.Louis.

More in Discussion 11: Explaining Ferguson Through Place and Race