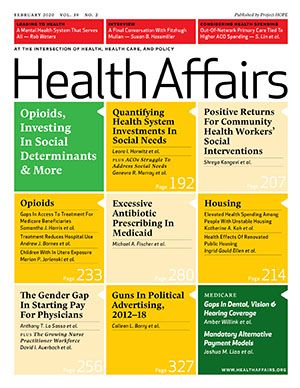 The nation’s aging and deteriorating public housing stock is in desperate need of repair. The U.S. Department of Housing and Urban Development (HUD) estimates that the 1.1 million public housing units across the country need $50 billion to make critical improvements such as fixing broken elevators, updating old heating systems, and removing lead paint. Amidst the public housing funding crisis, there is growing concern that these poor housing conditions can compromise the health of residents. A wealth of research has shown that poor housing quality can expose residents to health hazards such as lead and mold, increase the risk for unintentional injuries, and harbor conditions that exacerbate chronic disease (e.g. pest infestations that trigger asthma).

While the relationship between poor housing quality and health has been well documented, few studies have specifically investigated how housing renovations may improve the health and well-being of public housing residents.

In early 2015, the New York City Housing Authority (NYCHA) sold a 50% stake in six subsidized housing developments to private developers that specialize in affordable housing. The developers then made interior and exterior improvements to the developments, such as replacing elevators, installing emergency generators, and patching peeling paint, among others.

Using information from the private developers and New York state Medicaid claims data, Ellen and colleagues constructed a treatment group of 1,644 Medicaid beneficiaries who were living in the six treated (that is, renovated) housing developments in 2014, the year prior to renovation. They formed a matched comparison group of Medicaid enrollees in public housing developments in the same neighborhoods as those of the treated developments.

To determine the effect of the renovations on residents’ health, they used a difference-in-differences regression model, focusing on (1) five specific housing-sensitive health conditions -- asthma, respiratory infections, hypertension, mental health, and injuries -- and (2) two composite indices of housing-sensitive conditions that the authors designed for this study. The authors created the composite indices to measure what they deem “aggregate health,” or the general health of the development’s residents.

The study’s results suggest that though the transfer of building ownership and the renovations that follow do not significantly improve residents’ health on any individual outcome studied, the residents in the renovated buildings did exhibit improvements relative to the comparison group in four of the five housing-sensitive health conditions between 2014 and 2018. And, perhaps more important, the authors found significant improvements in the composite indices among the treatment group. The authors conclude, “While the ownership transfer and broad-based renovation do not appear to have appreciably influenced any individual health outcome in the three years after renovation, they may have modestly moved the needle on aggregate health.”

The authors note several limitations, including both their inability to account for potential differences between the treated (renovated) and comparison housing developments and the fact that Medicaid claims data can over- or under-estimate true disease rates. Moreover, health outcomes data reveal only one component of residents’ overall well-being. Self-reported measures of health and qualitative findings are also important to take into account. For example, in a post-renovation survey of residents in the treated developments and in similar nearby developments, those in the treated developments indicated significantly higher rates of satisfaction. Because both the intervention (a combination of new ownership and renovations) and residents’ responses to it are multi-faceted, the authors call for further study of the relationship between housing improvements and residents’ well-being. Read the study in Health Affairs. (Subscription Required)