Facing the Past: Housing and Community Development Landscape of New York City in the 1990s 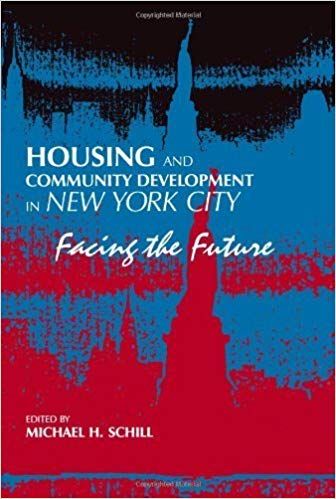 To commemorate 25 years since the Furman Center's founding, we are looking back at some of the notable scholarship, writing, and people connected to the Furman Center since our founding in 1995. Kicking off this retrospective, we look back at a collection of essays published in 1999 called Housing and Community Development in New York City: Facing the Future. The Furman Center’s first Faculty Director, Michael H. Schill, edited this compilation.

In some regards, the housing and community development landscape has shifted dramatically, in others it remains largely unchanged. Several major issues of concern, such as high rent burdens among low-income households, regulatory barriers to new housing supply, the New York City Housing Authority’s (NYCHA) future, the property tax system, homelessness, and housing instability caused by evictions remain at the center of the City’s housing policy agenda today. Then, as now, housing planners raised the alarm about a decline in federal resources, and strategized about how local governments could adapt to federal retreat.

Yet in other ways, the conditions and context of the mid-1990s is radically different. New York City owned and operated 25,000 of the more than 100,000 units of housing seized through tax foreclosures under the In Rem program. The city’s housing production was net negative during this period, with 12,000 units on average lost to demolition, condemnation, disinvestment, and mergers from 1993-1996 and only about half replaced through new construction. The most significant problem facing NYCHA was violent crime. Though serious concerns about capital needs loomed, maintenance of NYCHA’s 172,096 public housing units was comparatively well-regarded, particularly in light of high profile demolitions in places like St. Louis and Chicago. Policy makers and housing experts tended to focus their concerns about the impacts of welfare reform on low-income households’ ability to afford housing and sustainable rents. The words “gentrification”, “displacement”, “climate change” and “income inequality” are almost totally absent from the compilation.

The book begins with a chapter by Michael H. Schill and Benjamin P. Scafadi framing New York City’s housing market and conditions. They showed that after losing nearly 1 million residents between 1970 and 1980, the city’s population had rebounded, and seemed to have stabilized by the mid-1990s. The median rent in the New York City area was $632 in 1995 ($1,084 in 2018 dollars). By 1996, nearly 600,000 households experienced severe affordability problems, defined as a renter paying more than 50 percent of gross income towards housing, or a homeowner paying more than 60 percent.

Schill and Scafadi conclude with an analysis of the racial demographics of various housing challenges, establishing a lens that continues to drive the Furman Center’s research today: “housing market forces, including racial and ethnic discrimination, restrict the ability of many New Yorkers to move to neighborhoods where they would be able to obtain good schools for their children and access to jobs and economic opportunities for their families.”

In a chapter titled Reviving New York City’s Housing Market, Peter D. Salins argued for an aggressive deregulation agenda, including expanded vacancy decontrol of rent regulated units, property tax reform, and upzoning in industrial areas. Salins’ agenda for reforming rent regulation and property taxes did not pass though the property tax reform discussion continues today. In contrast, his suggestion to rezone manufacturing areas for greater residential use eventually did move forward, paving the way for significant construction in the 2000s. Salins’ statistics showing the failure of supply to respond to rising demand remain compelling in a city that built less housing over the last nine years than during the Great Depression, despite a much larger population:

The book also examines New York City’s portfolio of in rem housing, units seized following tax foreclosure with the goal of stemming abandonment plaguing the city during the 1970s. The result, as Frank Braconi’s chapter describes, was that the City of New York essentially operated one of the largest and most distressed housing authorities in the country for two decades. Many of the programs used by the Department of Housing Preservation and Development to return these units to financial and physical viability, including conversion sales to tenants, transfer to non-profit owners, and use of the for-profit sector, generated controversy and did not result in financial stability for the buildings. Problems proliferated as the City sought to use in rem units to house its burgeoning homeless population. While noting some ancillary benefits of the City’s in rem strategy, Braconi concludes that it ultimately cannibalized federal block grant resources and masked the inadequacy of shelter allowances provided through Temporary Assistance to Needy Families, to the city’s detriment.

Federally-Assisted Housing, Devolution, and the Role of Public-Private Partnerships

J. Phillip Thompson, now New York City’s Deputy Mayor for Strategic Policy Initiatives, wrote a compelling and concise history of the New York City Housing Authority (NYCHA), describing its evolving struggles as it transitioned from workforce housing to housing for the poorest and most vulnerable. Thompson describes the challenges this evolution caused for NYCHA’s operation, and the strategies NYCHA experimented with in order to deconcentrate poverty in its developments and reduce the associated crime and social problems. The chapter ends with a prophetic warning about looming $6 billion capital needs and the management challenges they would represent.

Victor Bach of the Community Service Society contributed a chapter on the preservation of HUD-assisted housing outside the context of NYCHA, delving deeply into the history of federal supply-side housing interventions, first on financing through the Federal Housing Administration, and later through direct contract-based rent subsidies and an increasingly complex series of preservation options.

The provision of housing through project-based subsidies and financing heralded the transition of housing assistance from a federal model to one reliant on robust public-private partnerships. Kathryn Wylde, now of the Partnership for NYC, writes about how New York City enthusiastically embraced this model to become a national leader in affordable housing production and community-driven solutions.

Housing court was also covered in the book, in a chapter by Paula Galowitz. Galowitz surveyed the history and state of housing court, finding that its actual function was far removed from the initial legislative intent to enforce “state and local laws for the establishment and maintenance of housing standards.” Galowitz laid out a reform agenda, including universal representation for defendants facing eviction, additional resources to help tenants afford rent payments, and a change in the focus and tone of housing court litigation.

Eviction filing trend data from 2017, recently analyzed by the Furman Center, suggest some progress in housing court over the last 25 years. During that time, total filings have dropped by nearly 40 percent to 176,500. In addition, the number of housing court judges has increased from 35 to 50, suggesting an average caseload of roughly 3,500 cases per year (down from 7,000). Data also suggest more recent progress on the share of tenants who are represented in proceedings. It was just 11.9 percent according to a 1993 study.

Recent research from Furman Center Doctoral Fellows demonstrates the connection between eviction and homelessness, yet even as evictions have declined, the size of New York City’s average daily homeless population has approximately tripled over the last 25 years. A chapter on homelessness, authored by Dennis P. Culhane, Susan M. Wachter, and Stephen Metraux, documents the troubling rise in family homelessness. They also examined the City’s changing criteria for shelter entry and exit under a Giuliani administration concerned with incentivizing shelter stays, yet they find no significant reductions in shelter entry despite the new stricter policy regime.

The authors note that one bright spot at that time was the 10 percent decline in demand for single adult shelter placements from 1989 to 1993, a trend they attributed to the addition of 7,500 units of SRO and supportive housing as part of a joint City and State initiative under the Koch Housing Plan.

Housing and Community Development in New York City provides a fascinating window into New York City’s housing landscape during the Furman Center’s early days. Reading the who’s who list of contributors with the benefit of hindsight evokes an appreciation for some of the hard-fought progress made, and for some of the perilous pitfalls avoided.

Yet a present-day reader must also grapple with the entrenched, complex challenges that have evolved since the mid-1990s when the essays were written. As the City’s population has grown from 7.3 million in 1990 to nearly 8.4 million today, the number of homeless New Yorkers has tripled, NYCHA’s capital needs have grown exponentially, and the share of households facing severe cost burdens has grown by 10 percentage points.

Many of these vexing problems were identified and predicted by the urban planners writing about them when the Furman Center was founded. To build a future in which New York City’s neighborhoods are resilient, inclusive, and prosperous, New York needs the Furman Center’s contributions to research, data-driven policy, productive dialogue and collaboration now more than ever.