COVID-19 and the Rental Market

The economic fallout from the COVID-19 pandemic has led to unprecedented job losses around the United States. Over 30 million Americans have filed for unemployment over the last six weeks. Our previous analysis of professions most vulnerable to immediate job loss from the pandemic and the associated public health response found that about 1,405,000 (or 34 percent) of New York City wage earners may be at immediate risk of lost income—that does not include those indirectly affected as  the economic shock and decreased demand spread through the economy. Such massive income shocks will make it difficult for many New Yorkers to afford rental payments, and could ultimately pose a threat to housing stability without a robust policy response.

If renters do not receive adequate income support, whether through unemployment insurance, rental assistance, or another emergency program, they are less able, and therefore less likely to pay rent in accordance with their lease. With less rental revenue, many landlords may not be able to keep up maintenance, keep building staff employed, or make mortgage payments. A surge of tenants may face eviction after New York’s eviction moratorium expires. Thus, housing market interventions may be necessary supplements to ongoing interventions in the labor market; without them, what began as a public health crisis, and has become a labor market crisis, could soon also become a housing market crisis.

To shed light on how the potential non-payment of rent may be felt in the housing market, this analysis examines the housing stock occupied by renters in especially economically vulnerable professions. It also assesses which New York City neighborhoods are most vulnerable to non-payment of rent and the characteristics of the renters and housing stock in those neighborhoods.

As this analysis shows, all types of rental housing face the possibility of serious disruption, with smaller buildings and buildings in lower-income neighborhoods at greater risk. Renters in more economically-vulnerable professions are more likely than renters in less economically vulnerable professions to live in small buildings, particularly in 2-4-unit buildings. They struggle with higher rates of rent burdens, and tend to live in the neighborhoods where many other lower-income households face higher rates of rent burdens. Low-Income Housing Tax Credit buildings and rent-stabilized units are somewhat more common in these at-risk neighborhoods, while public housing is spread more evenly across higher-risk and lower-risk parts of the city.

But no neighborhood, and no type of housing, is likely to be unaffected. Any response limited to one type of building, one subsidy stream, or one type of neighborhood will miss large shares of the affected population and housing. Data examining the geography of the impact, the characteristics of buildings and owners most likely to face financial distress, and the makeup of vulnerable households is crucial as leaders grapple with this looming crisis.

This analysis focuses on renters rather than homeowners, as the most immediate housing impacts in New York City are likely to be concentrated among renters. As an earlier Furman Center analysis found, the majority of households with at least one member working in a more economically vulnerable profession were renters. More than 85 percent of households with one member in a more economically vulnerable occupation and with household income below $50,000 were renters. At the same time, as the Urban Institute has noted, federal relief to date has provided mortgage forbearance to 70 percent of homeowners with a mortgage, while the relief to renters has provided more limited benefits and to a smaller share of households. Given that renters are more vulnerable, we foresee greater immediate impacts in the rental market than the homeownership market.

Building off our earlier analysis, our predictions for economic vulnerability do not take into account either the distribution of federal assistance—whether through expanded unemployment insurance, the Paycheck Protection Program, or direct stimulus spending—or second-order economic disruption stemming from the overall decline in economic activity. These predictions, for now, look only at which households are most likely to suffer from job losses directly connected to the pandemic.

We identify the size of the buildings where households live using 2018 American Community Survey data, the most recent data available for this analysis. We also examine variation across neighborhoods. For this analysis, we classified New York City Sub-Borough Areas (SBAs), also referred to as PUMAs, into three categories based on the proportion of renter households with members in vulnerable industries:

Reviewing SBAs according to these categories, we examine the housing characteristics of each group. We examine data on rental prices, including the proportion of renters in each category of neighborhood that are rent burdened and the median gross rent. We also examine the number of rent stabilized properties in SBAs with higher or lower vulnerable renter household shares. Finally, we examine the prevalence of certain types of subsidized housing in each neighborhood vulnerability category. For this analysis, we count all residential units within properties that have a subsidy, regardless of whether individual units receive government subsidies. The subsidy program categories are not mutually exclusive.

You can find our occupation categorization here, and all of the data and code for this analysis are available on our GitHub. Again, we invite your advice and feedback.

Renters in more vulnerable occupations live in all sizes of buildings, but are more likely to live in small buildings

As interventions into the housing market become necessary, targeting those interventions properly requires understanding the housing circumstances of those affected. Public policy will, in effect, be allocating losses between tenants, landlords, lenders, and the government; one important factor in making that decision is what losses building owners are able to sustain. Similarly, policymakers will have to decide whether to route assistance through tenants or landlords, a question that turns in part on the size and sophistication of affected owners. 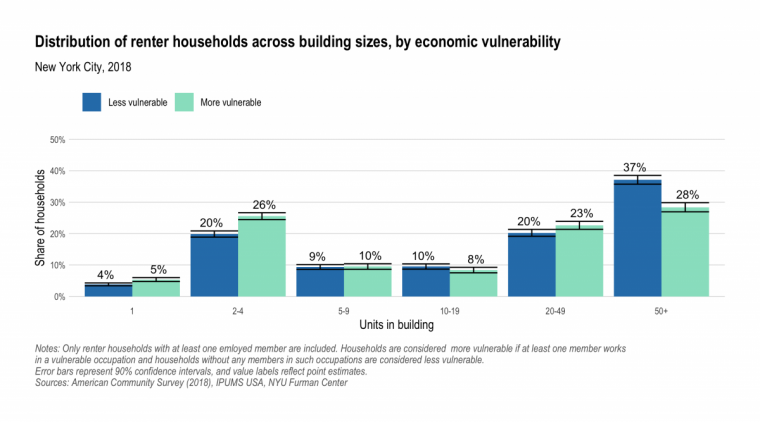 These data show that more-vulnerable renters disproportionately live in smaller buildings—though, as with the general population, substantial shares live in large buildings as well. All sizes of building are likely to see substantial impacts in the coming months, but small building owners appear especially vulnerable to lost rental income. 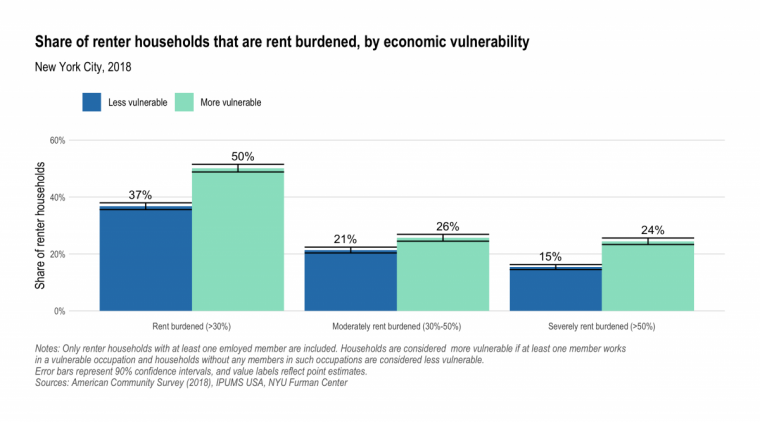 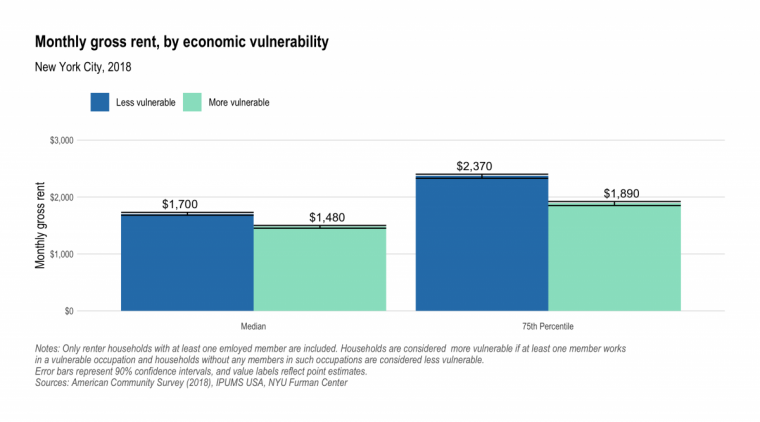 All neighborhoods are likely to see serious disruption to their rental markets, but some neighborhoods have many more households with members employed in more economically-vulnerable professions. 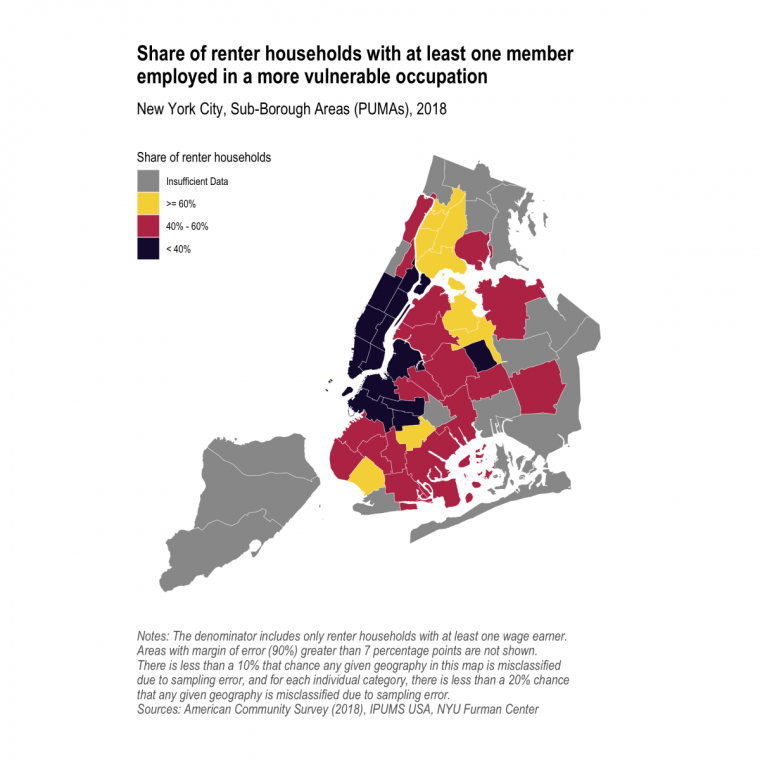 The neighborhoods with the largest shares of more economically vulnerable households are concentrated in the South Bronx and in Northern Queens, as well as a few parts of Brooklyn. Most of the neighborhoods with the smallest shares of more vulnerable households are located in Manhattan below 125th Street and in Northwest Brooklyn.

Understanding these disparities may indicate that, in the long run, specific place-based interventions could be required. The foreclosure crisis of the last recession taught us much about the ripple effects of financially distressed housing. Foreclosures can reduce property values and increase crime in the surrounding neighborhood—and concentrated foreclosures can do so to a still-greater extent. As rental non-payment leads to landlords falling behind on their mortgages, some areas may see neighborhood-wide effects that last well beyond the pandemic. These could be compounded by the current crisis’s serious consequences for small businesses, especially those owned by people of color. Targeted interventions may be needed to respond to—and ideally prevent—location-specific economic disruptions.

Properly structuring a rental market intervention requires an assessment of the regulatory status of the affected housing stock. The options available, and the interests at stake, may differ based on whether the non-payment of rent is concentrated in particular developments already bound up in relationships with government agencies. In this section we highlight the distribution of public housing and LIHTC housing—the two largest portfolios of federally financed or assisted housing—as well as rent-stabilized housing in the areas of focus.

Each of these programs adjusts rents differently in response to changes in tenant income. In public housing, rents adjust up or down along with incomes, whereas in LIHTC housing, rents are not tied to income after initial tenant move-in. In rent-stabilized housing, rents do not adjust based on individual tenants’ income, but the Rent Guidelines Board may consider overall affordability in setting annual, citywide rent adjustments. Thus, each program allocates the burden of lost tenant income differently between landlords and tenants. Additionally, public housing receives ongoing federal operating subsidies, while LIHTC and rent-stabilized housing do not.

The non-payment of rent due to COVID-related economic disruption is not likely to be limited to market-rate apartments or to particular subsidy programs. While additional data would be necessary to determine whether the individual households facing job losses lived in these subsidized or regulated forms of housing, as opposed to living in neighborhoods with higher concentrations of such housing, these data indicate that any rental market interventions will need to be coordinated with multiple existing regulatory schemes, and informed by an understanding of specific program rules.

The impact of the COVID crisis on New York City’s labor market has been unprecedented. Even with existing federal relief efforts, many renters will likely struggle to pay their rent in the months moving forward, which will bring this economic crisis into the housing market. This analysis shows that different neighborhoods and different types of buildings are at risk of greater rates of rent non-payment. In particular, the renters most likely to see economic disruption from the COVID crisis tend to live disproportionately in smaller buildings, where owners may have fewer resources to weather long periods of non-payment.

Additionally, renters most likely to see economic disruption pay lower rents and face higher rent burdens. They also live in neighborhoods with lower rents, higher rent burdens, and more properties supported by the LIHTC program or that are rent-stabilized. Without an adequate intervention, these areas could face additional long-run challenges, as evictions and foreclosures may contribute to compounding harms at the neighborhood scale.

However, the economic disruption from COVID is so broad, and New York City’s rental housing stock so diverse, that no neighborhood and no sector of the housing market is likely to be spared. Conversely, there is no sector of the rental housing market in which COVID-related job losses will be so disproportionately concentrated that it poses a natural target for assistance. Rather, any intervention limited to one housing program’s portfolio, or targeted at one class of building, may be too narrow an instrument.

These data suggest that designing a building-based approach that is workable for all of New York’s many kinds of housing may prove challenging, as tailored approaches for each of the city’s specific building types might prove necessary. Policymakers should prioritize flexibility in designing any housing market response to the COVID crisis, whether tenant-based or project-based