What are the Housing Costs of Households Most Vulnerable to Job Layoffs?  An Initial Analysis

As the COVID-19 public health crisis grows in New York City and across the United States, there is significant concern about the economic effect the crisis will have on workers in occupations susceptible to mass layoffs. Workers in a number of sectors face significant income loss due to closures, reduced hours, and cancellations. While a $2.2 trillion stimulus bill that expands unemployment benefits was signed into law last Friday, not all affected workers will have access to the expanded aid. In an effort to understand the scale of the issue and disparities when examining potential impacts by race, we reviewed pre-crisis incomes and housing costs of New York City residents who work in occupations that are more vulnerable to income loss (“vulnerable occupations”).

We invite constructive criticism and a dialogue over the methodology we use. To conduct this analysis, we used 2018 ACS Microdata on households in New York City. We separated occupations into two categories: those with the highest risk of mass layoffs and workplace closures due to the pandemic; and those likely to be more protected from widespread disruption. Our categorization draws on work by others (including the Brookings Institution, Moody's, and the U.S. Private Sector Job Quality Index Team) in identifying the industries and occupations most vulnerable to job loss due to the pandemic. Other kinds of analyses focus on the susceptibility of certain workers to contracting the virus, due to the essential nature of the job and the inability of these workers to work from home. While these workers aren’t necessarily in industries facing mass layoffs, some may likely still face loss in wages associated with their inability to continue working. Additionally, our numbers assume that all workers in a vulnerable occupation group are prone to layoffs, when it is likely that a percentage of each category are able to maintain their incomes. Because this proportion is unknown, we err on the side of considering all workers in a category at risk. In total, we estimate that about 1,405,000 (or 34 percent) of the city’s wage earners may be at risk of income loss.

You can find our occupation categorization here, and all of the data and code for this analysis are available on our GitHub. Again, we invite your advice and feedback.

Based on these assumptions, which we subject to further refinement, we find that:

Lower income workers are significantly more likely to rely on employment income from jobs that are prone to job loss. 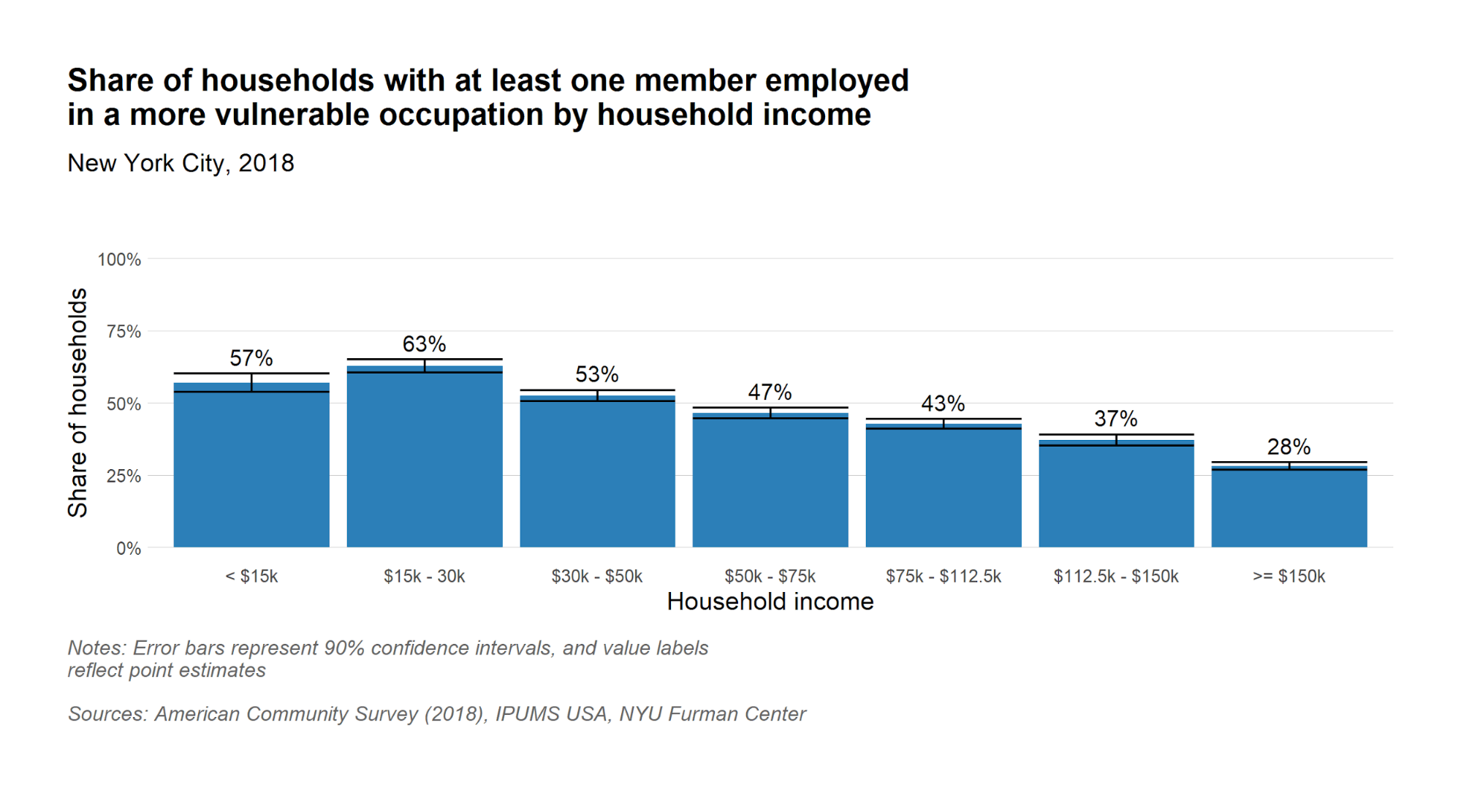 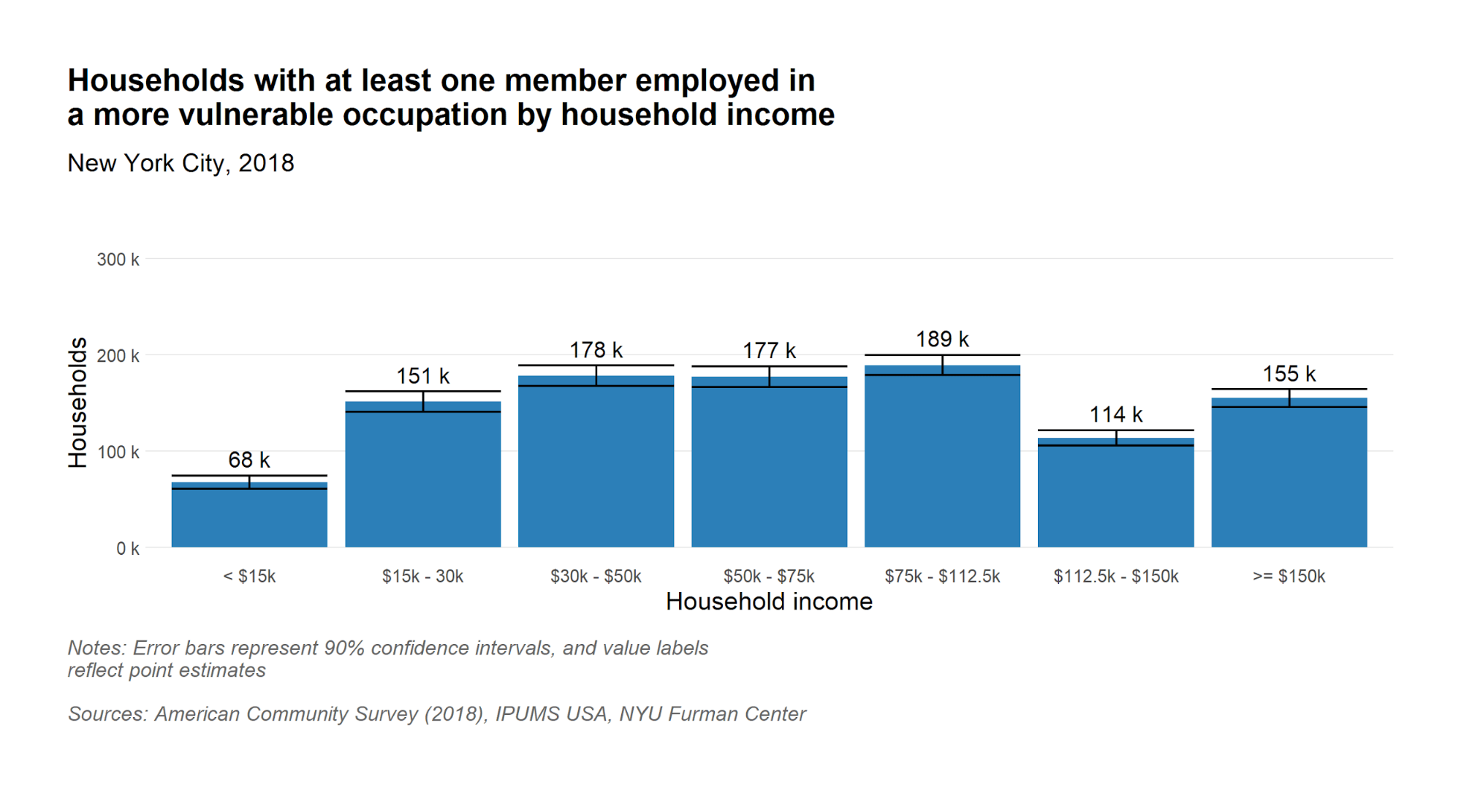 The majority of households with at least one member working in a vulnerable occupation and income under $150,000 were renters. 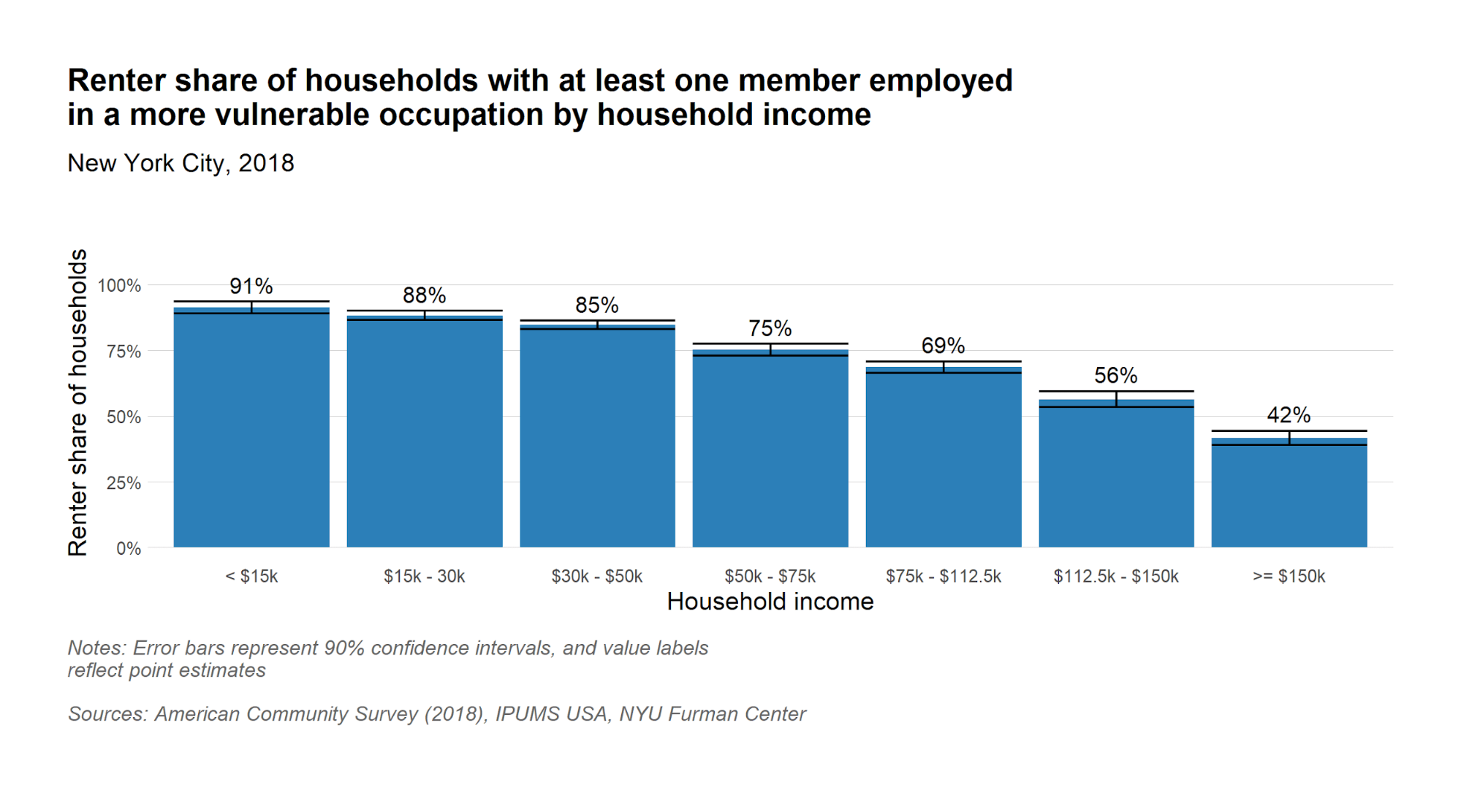 Households with incomes between $15,000 and $50,000 were more likely to rely entirely on employment income from vulnerable occupations. These households may be hyper-vulnerable to the negative effects of job loss. 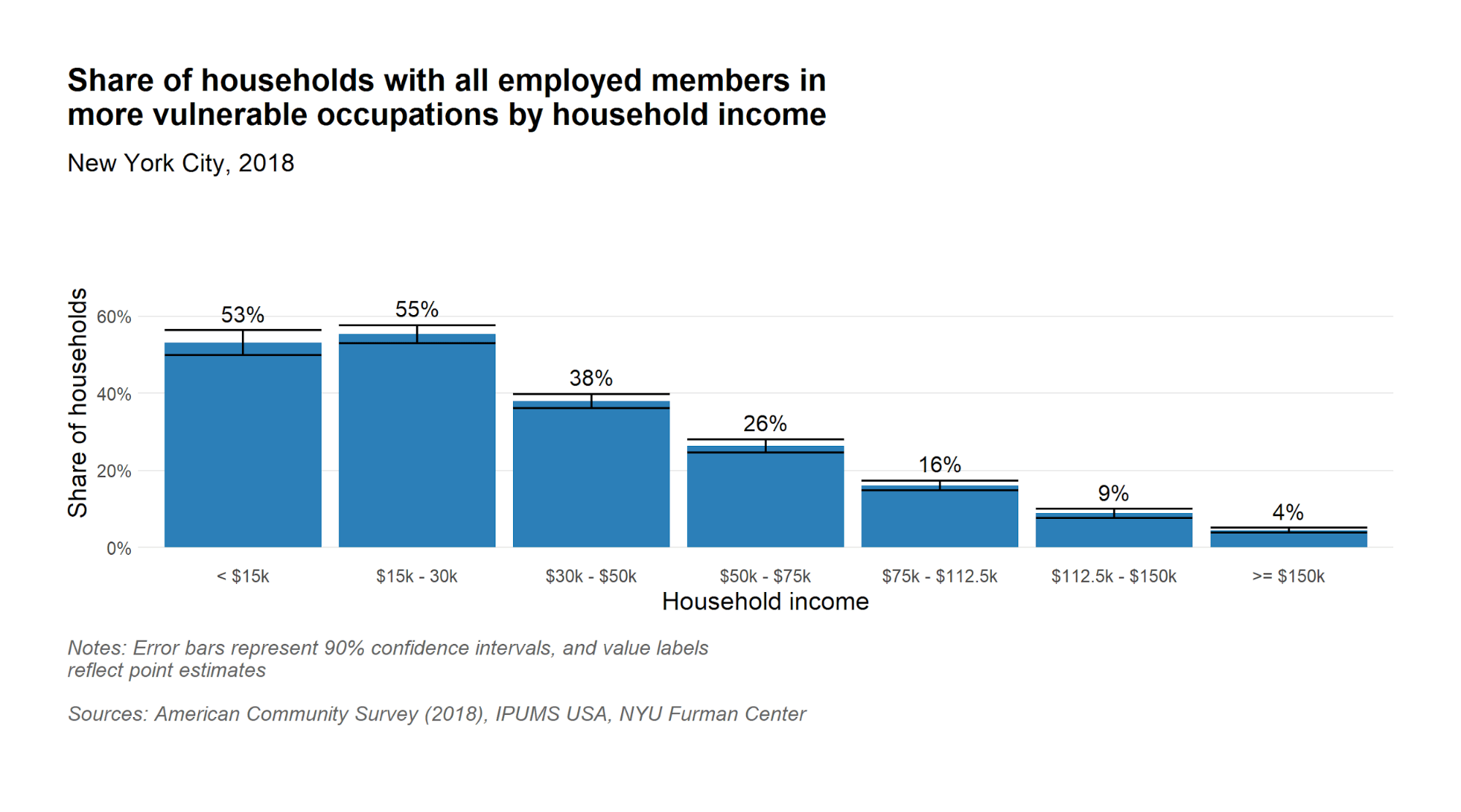 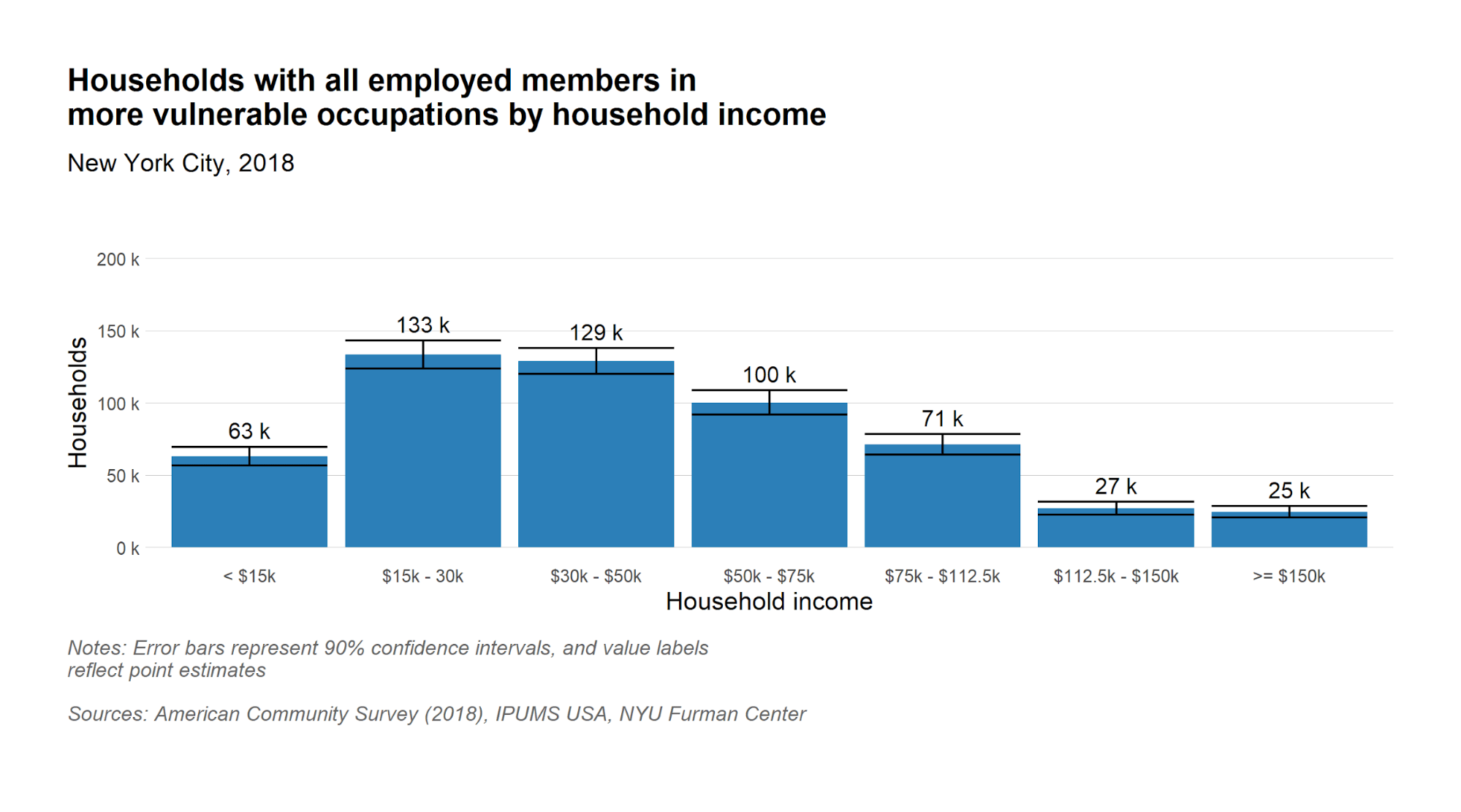 Households with at least one worker in a vulnerable occupation and income under $150,000 had a median rent of $1,430 and a median household monthly income of $4,583.

As policymakers weigh pathways to support renters in the midst of COVID-19, a key question has been the cost of rent for the most vulnerable households. If renters do not have emergency savings and are unable to pay their rent due to COVID-19 related shutdowns, they may emerge from the crisis in debt and/or at risk of eviction. 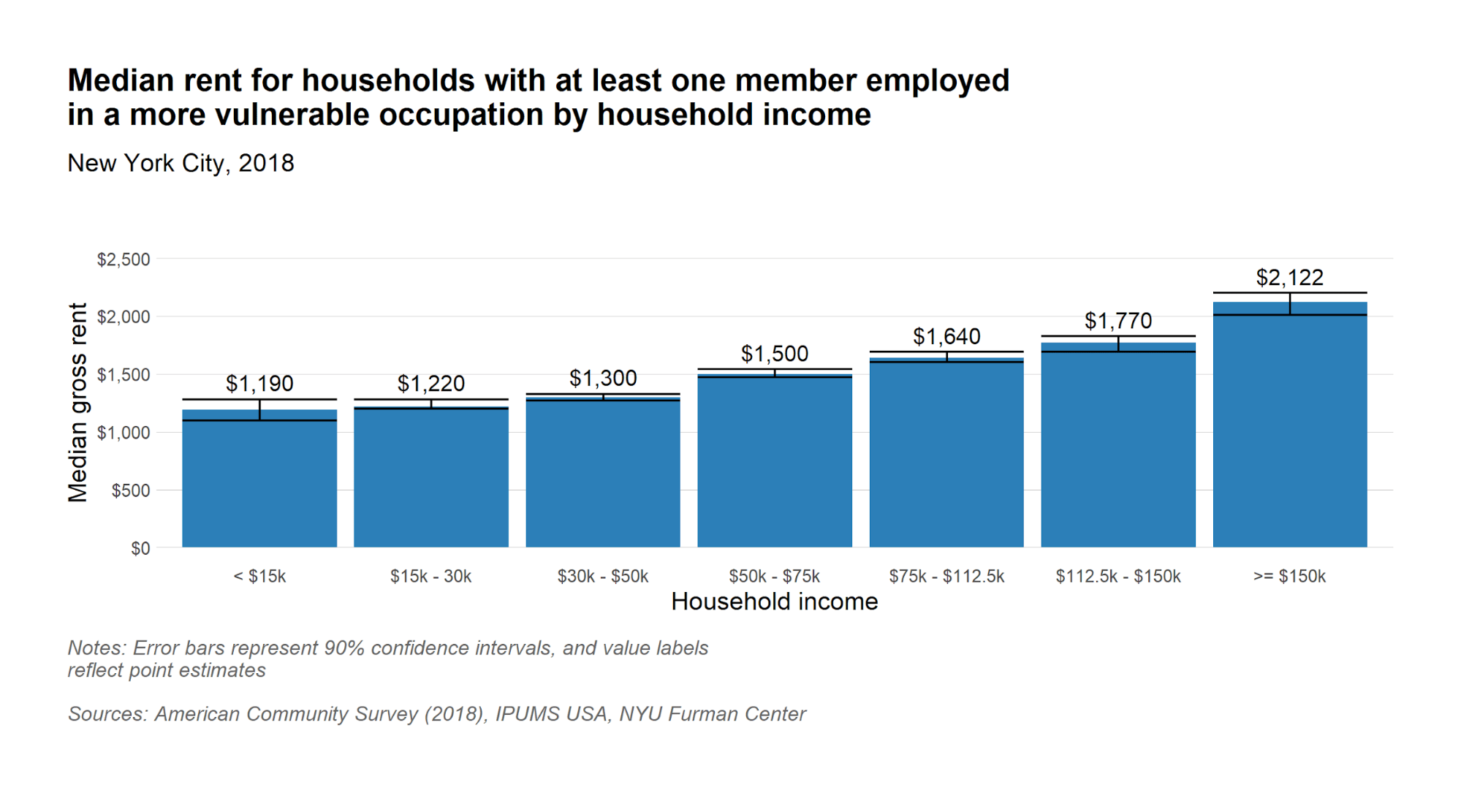 The pandemic may widen existing racial and ethnic income gaps, especially for Hispanic households, who disproportionately worked in vulnerable occupations in 2018. 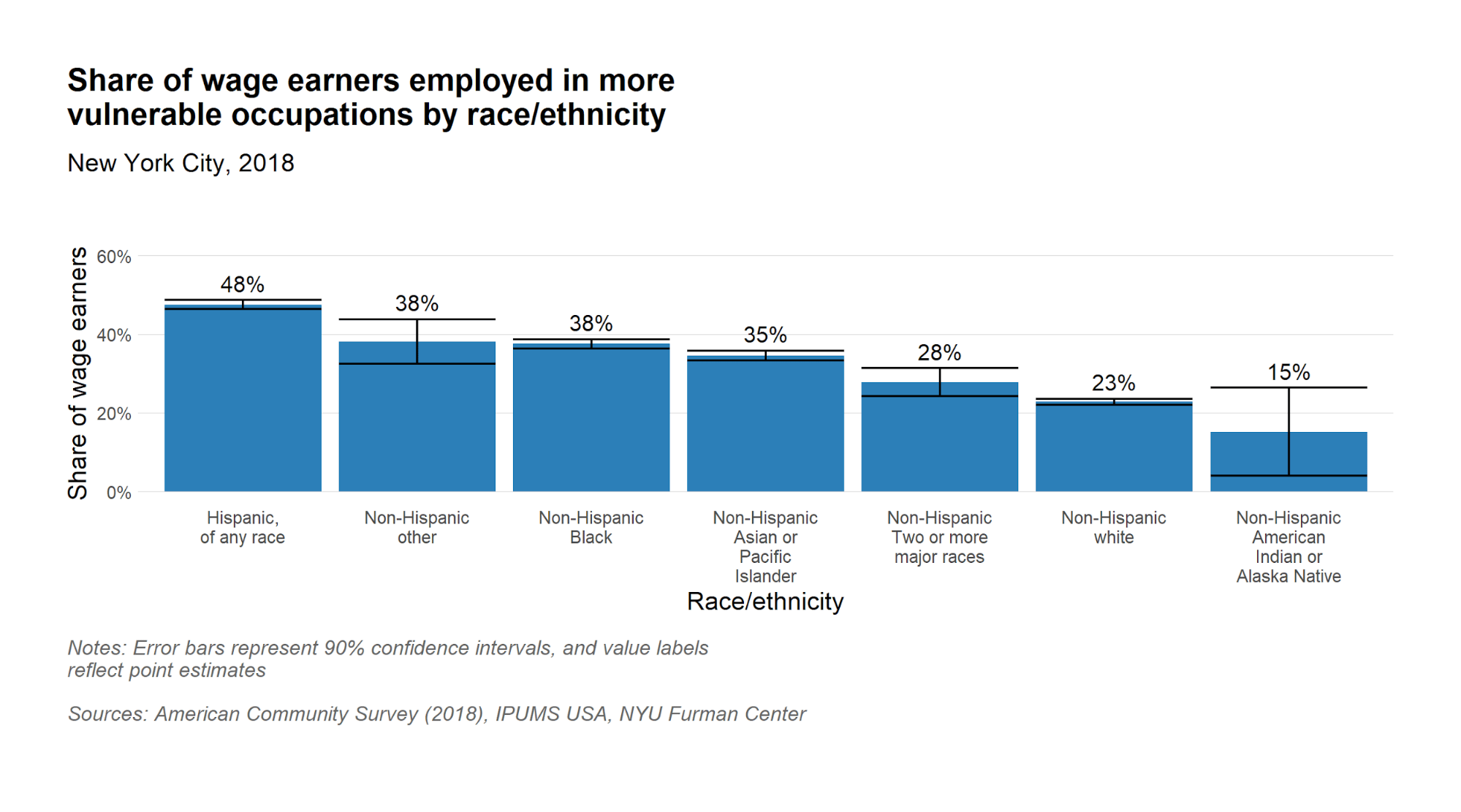