The Dream Revisited: A Discussion on Neighborhood Gentrification 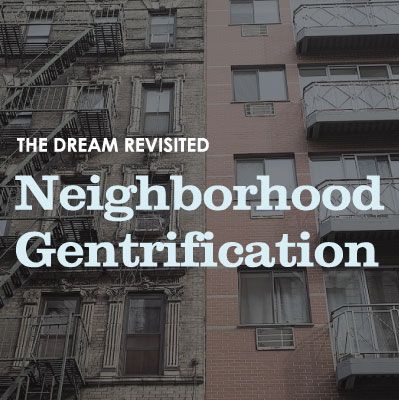 Launched on Martin Luther King Jr. Day earlier this year, The Dream Revisited is a “slow debate” on the role that segregation in neighborhoods and schools plays in hindering economic and racial equality. It is presented as part of the NYU Furman Center’s year-long Integration Research Initiative.

The fourth discussion in The Dream Revisited explores the relationship between gentrification, neighborhood integration, and public participation.  The posts propose new policy initiatives to maintain affordability and support racially integrated neighborhoods. Essays include:

Join the discussion on Twitter via the hashtag #TheDreamRevisited.

The Dream Revisited will feature a new discussion each month for the entire year. At the conclusion of project in 2014, the debates will be digitally archived. The Dream Revisited is presented as part of the NYU Furman Center's Integration Research Initiative and supported in part by a grant from the Open Society Foundations.