Policy Breakfast: The Future of 421-a and Housing Development 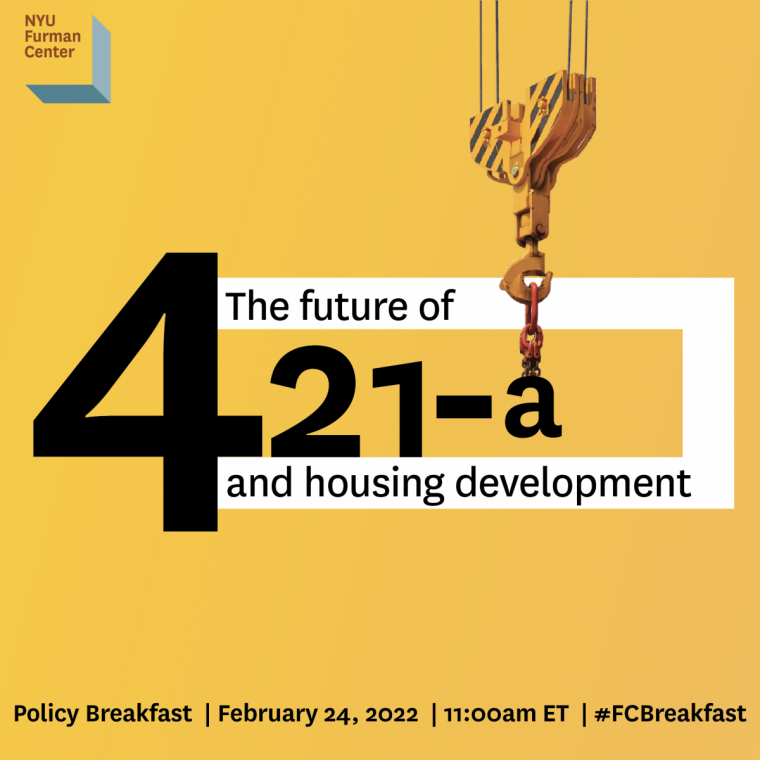 On February 24th, the NYU Furman Center hosted a virtual policy breakfast titled: ‘The future of 421-a and Housing Development’. Since the 1970s, the 421-a tax exemption has been a cornerstone of New York City’s housing production strategy, by lowering property taxes on multifamily housing built across the city. With the program up for renewal in mid-June, legislators are debating several options - from reauthorization and reform, to repeal and replacement. New York Governor Kathy Hochul has proposed a new tax exemption program, 485-w (read a comparison of the proposed changes with the current program here), that would function similarly to 421-a, but with an expanded ownership option, deeper affordability, and a shorter tax benefit period for developers, among other changes. Our panelists offered a range of perspectives on the current 421-a program and its role in the future of the city’s housing policy. The debate touched on a host of interconnected issues, including the city's arcane property tax system and Mandatory Inclusionary Housing, as well as a relatively new Zoning Resolution requirement that significantly upzoned residential lots to include income-restricted housing.

The NYU Furman Center’s Policy and Planning Manager Hayley Raetz kicked off the event with a presentation providing background on the 421-a program and its role in the past decade of housing development in New York City. Review the presentation, which outlines early versions of the initiative in the 1970s and 1980s, the seven program options under 421-a’s current framework, and arguments for and against extending 421-a. Raetz also summarized a recent Furman Center Data Brief, which explored housing built under 421-a over the past decade. Between 2010 and 2020, the program contributed the greatest share of units built through property tax incentives. However, since 2016, 421-a units have shifted from deeper levels of affordability often created in tandem with low-interest loans and federal subsidies, to levels affordable to middle-income households, but absent these same federal subsidies.

Watch the full event below:

Proponents of 421-a argue that the program creates new housing units that would not otherwise be built because New York City’s property taxes on new development are so costly. Gerhards admitted that 421-a “wasn’t perfect” but highlighted its critical role in creating the limited amount of rental housing that exists in New York City. “This is the program we need within the confines of a number of different parameters - our zoning requirements, our tax system, and the need for more rental housing,” Gerhards said. She repeatedly stressed that the city must see the construction of 560,000 rental units by 2030 to serve its growing population. “I have yet to hear how we will reach that number in other ways.”

Without the 421-a tool, Gerhards projected that New York City would have less new multifamily rental housing. However, she also noted that Governor Hochul’s proposed replacement - 485-w - would result in different types of housing being built. Deeper affordability requirements embedded in 485-w could limit new development in middle and lower-rent markets, undercutting one of the goals of the current program. “Where we believe it will work is in the higher-cost, higher-rent markets because you’ll have the cross-subsidization,” Gerhards said. “That’s a discrete policy choice, [but], when development occurs, it will produce more deeply affordable units.”

Criticisms of the Exemption

Still, the current version of 421-a has long been the subject of criticism in its own right. Panelists articulated some of the chief concerns with the existing program. Overall, Brad Lander argued that the costs far outweigh the benefits, citing steep expenditures associated with each new unit of housing.

Critics also argue that a substantial portion of units built through the program are affordable to middle-income households (rather than lower-income households), earning as high as 130% of New York’s area median income. In 2021, those units would be available to a family of three earning $139,620.

Citing that figure, Lander said that 421-a and Hochul’s proposed replacement don’t come “anywhere close” to helping provide “deeply-needed” affordable housing in the city. “I don’t know how you can call it an affordable housing program, if 75% of New Yorkers can’t afford it,” he said. Williams echoed Lander’s concerns, pointing out that 421-a has created very little affordable housing in the city’s highest-cost housing markets since 2017. “Right now, we’ve created a program that’s focused on creating heavily market rate units with some level of affordability in our outer boroughs and predominantly [communities of color],” Williams said. “That creates market inequities and…real concerns around our racial equity and anti-displacement goals.”

While some have lauded Governor Hochul’s revamped 421-a proposal for its expanded homeownership option, Lander and Williams tempered that optimism as well. Under the Governor’s version, 485-w, purchasers could make up to 130% area median income, and resales would be regulated over a 30-year period. Lander and Williams both endorsed a genuinely affordable multifamily homeownership program for New Yorkers, but did not think the 485-w achieved that mission. Williams said it was “irresponsible” to address homeownership solutions without recognizing the city’s racial equity gap, noting that an “abysmal” 8% of homeownership loans go to Black and Latinx borrowers.

Some have argued that different strategies could better encourage affordable housing and multifamily development. Such tactics include reforming both New York City’s property tax system and the land use policies. Critics charge the City of New York’s current structure is byzantine and inequitable, and tenants living in large rental buildings pay more in taxes than those who own the homes outright.

Lander championed those points, claiming that tweaking 421-a would prevent the City from conducting much-needed reforms to the property tax system. “It’s an indefensible program,” Lander said. “If we want something that’s actually going to work, we need to start from scratch. Starting from scratch is property tax reform that treats rentals and condos with parity so that market-rate development can happen without such a thumb on the scale.” Lander pushed State elected officials to let 421-a sunset in June and set an end-of-year deadline to accomplish property tax reform.

Stark stressed that one of the key flaws in the current property tax system is that rental housing is typically taxed at a higher effective rate than condominiums. She urged New York City to tax rentals at rates more competitive with other municipalities, and even detailed issues on the gross income currently taxed on New York City’s multifamily properties, which panelists agreed generally ranged between 25-30% of gross income. Stark noted “the taxes on rental housing most other places, are south of 10% of gross, not 20% and I've been taught that 25% is confiscatory that you might as well consider yourself taking folks’ property.”  Gerhards also noted that if 421-a were not renewed, it was difficult to predict what owners would choose to build, but suggested that we would see less multifamily rental development replaced by condos or warehouses. There is even the potential for land to go undeveloped as owners wait for a replacement tax incentive program, or a stronger local market.

This type of broad-based property tax reform, however, could face long odds, given persistent political challenges to systemic changes. Stark said, despite growing awareness of the system’s inequities, there hasn’t been a deep commitment to reform - in part, because of the support required from State of New York legislators who live outside of the city. “Nothing has happened in over 50 years with the property tax,” Stark said. “That’s what makes it really difficult to see any changes happening…this is an incredibly complicated topic, but I’m hopeful.” Lander was cautiously optimistic, citing improved relations between the Mayor and Governor, as well as rising frustration in areas disproportionately impacted by the current system (including South Brooklyn, Southeast Queens, Staten Island, and the South Bronx).

Beyond property tax reform, panelists highlighted additional tools and programs that could serve as alternatives to 421-a. While some fear that abandoning 421-a would stall the development of new multifamily rental housing, Williams pushed back on those concerns, arguing there were better tools for affordability in the City’s highest-cost markets, outside of tax incentives. Stark suggested taxing vacant land at a much higher rate to encourage the development of new rental housing, while Lander and Williams advocated for structural changes to target developments with units affordable to very and extremely low income households as opposed to the current 421-a program, which requires income-restricted units affordable to households earning as much as 120 or 130% of AMI. Any changes to the property tax system will require Albany lawmakers to amend existing law, or pass a new law. Additionally, any reductions in tax incentives would likely have to be offset by the City's capital subsidy budget.

Ultimately, the panelists agreed that neither 421-a, nor its potential replacement alone can fix New York City’s affordable housing crisis. All four participants underscored the need for new subsidies and improved land use policies to tackle high building costs, incentivize more multifamily housing development, and offer more housing units at deeper levels of affordability. It’s this broad range of policy and planning tools, the panelists argued, that would ultimately help create inclusive, economically integrated housing and communities across the city.