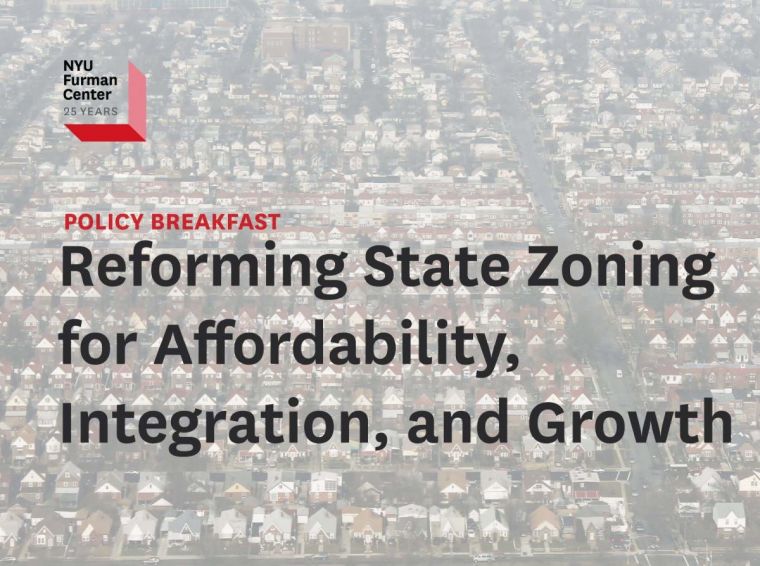 To describe those efforts in other areas, the event featured a discussion with experts from states that have been debating these issues and instituting reforms. Panelists included:

On November 16th, the NYU Furman Center hosted the second of the two-part virtual policy breakfast series, Learning From Other States: Reforming State Zoning for Affordability, Integration, and Growth. NYU Furman Center Legal Fellow Noah Kazis moderated the conversation, which focused on New York State and possible next steps to reform land use policy and local control in a way that improves housing affordability and reduces segregation.

NYU Furman Center Executive Director Mathew Murphy highlighted the relevance of land use reform to segregation and economic and racial disparities, as well as to the health and economic crises caused by the Covid-19 pandemic.

The discussion began with a presentation about the history of exclusionary zoning in New York, which the state first sought to unwind with the creation of the Urban Development Corporation (UDC) in 1968 following the assassination of Dr. Martin Luther King, Jr. The agency had a mandate to build affordable housing, and to override local zoning if necessary to do so. However, aggressive protests by suburban residents in Westchester County eventually forced a political retreat. Since then, New York State has had no statute that limits local exclusionary zoning. Today, the state has some of the strictest zoning rules and highest levels of segregation in the nation. But while New York failed to reduce exclusionary zoning, other states have innovated, with varying degrees of success.

The panelists described the current landscape and the most recent efforts in Oregon, California, Connecticut, and New Jersey. They discussed past and present legislation aimed to prevent exclusionary zoning. Mary Kyle McCurdy spoke about Oregon’s 1973 comprehensive land-use plan, which requires Oregon’s cities to zone land sufficiently to meet the housing needs of all residents at all income levels. This planning framework laid the groundwork for the passage of House Bill 2001 in 2019, which lifted the ban on duplexes in cities of at least 10,000, and required cities of at least 25,000 to make additional room for triplexes and fourplexes.

Michael Lens explained California’s Regional Housing Needs Assessment (RHNA), a process that allocates each local government in the state a share of the region’s projected housing needs, broken down by the level of household income, and requires those local governments to plan for how to meet those needs. Meanwhile, Connecticut’s 8-30g affordable housing statute, as described by Sara Bronin, allows developers to sue towns that do not have enough affordable housing and prompts them to build mixed-income projects. Finally, Adam Gordon described New Jersey’s landmark Mt Laurel court cases, --one of the most widely known judicial efforts to fight exclusionary zoning--and the spur to additional legislative action. All panelists agreed that despite some success in loosening zoning restrictions and encouraging housing production, shortages persist, particularly for low-income households.

The panel also explored next steps each state could pursue to break down zoning and land use restrictions that prevent adequate housing construction. The panel agreed tangible results require a political battle, and emphasized the importance of building bipartisan coalitions. Sara Bronin shared her experience with Desegregate Connecticut, a broad coalition that aims to move beyond the litigation remedy available under current state law, which limits recourse to those with sufficient resources to mount a legal challenge. Mary Kyle McCurdy also pointed out the bipartisan support achieved to pass HB 2001 and how the movement started small – with accessory dwelling unit reform – and then progressed to more ambitious goals once activists and other relevant actors had achieved smaller steps together. “Build a broad bipartisan coalition because you will have bipartisan opposition,” she said.

The discussion concluded with several thoughtful audience questions: how to adequately enforce statutory requirements, how to encourage production under different market conditions, and how to protect against displacement while building market rate units. For the answers to these and other questions, watch the full video.

Carolyn Grossman Meagher contextualized the state of housing in New York and introduced key trends that have emerged in the wake of the great recession. For example, while New York City accelerated production of multi-family housing after the financial crisis, the surrounding suburbs have decreased their production of single-family homes, leading to a decline in the already low rates of housing production in a region expanding economically.

Lorraine Collins of Enterprise Community Partners explained how zoning practices have affected affordable housing development in the state. She pointed to historical exclusionary zoning policy in New York’s suburbs since the New Deal era and described how it shapes present-day land use and residential segregation. She noted that the declines in housing production are exacerbated by zoning practices such as minimum lot sizes, and that results disproportionately affect low-income households and people of color. These dynamics create a situation where predominantly white localities have become the “zoning gatekeepers” through which any reform has to pass.

State Senator Brian Kavanah shared insights around the current conversation and the political landscape in Albany with regards to housing laws in general. He highlighted two points in the state legislature’s recent agenda: first, regulation efforts such as rent regulation and the passage of the Housing Stability and Tenant Protection Act; and second, the effort to increase housing production through subsidies. Within this context, he pointed out the interest in Albany in a conversation about local zoning practices’ influence on the problems of affordability and segregation. However, he cautioned that the conversation about state-wide zoning legislation is still in an early stage and that it is likely any changes will have to address the varying nature of New York State localities and housing markets while also addressing longstanding inequitable access to opportunity.

Juanita Lewis from Community Voices Heard (CVH) described the strategy her organization pursued in 2015 to address the housing situation facing the county. CVH pushed the county to conduct a housing needs assessment that would provide data to formulate recommendations that could bring more options and affordability to low-income households.

To close the discussion, the audience shared questions about the effect of the Covid-19 pandemic on housing trends, the scope of the legislative approach needed in comparison to other states, and how the regional variation across the state might affect the political discussion.