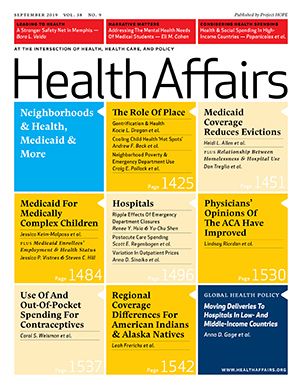 Gentrification is one of the most loaded terms in urbanism -- its very definition subject to intense analysis and variation. While many agree that community reinvestment and revitalization may bring certain benefits -- increased safety, greater access to high-quality schools, and enhanced economic opportunity -- critics fear that rapidly-changing neighborhoods erode local cultures, hike rents, and displace long-time residents. As debate continues to grow about gentrification and its consequences, it is critical to examine the evidence about the relationship of rapid neighborhood change to the well-being of residents.

A new article by Kacie L. Dragan, Furman Center Faculty Director Ingrid Gould Ellen, and NYU Wagner Dean Sherry A. Glied provides an important contribution to the evidence base on gentrification and children’s health outcomes. Published in Health Affairs, Gentrification And The Health Of Low-Income Children In New York City leverages the nation’s most populous city, to examine the potential health consequences for children growing up in gentrifying neighborhoods.

This paper’s authors examine a large, longitudinal administrative data set, comprising data from the state’s Medicaid program, to compare the health outcomes of children in New York City over the period 2009-2017. Controlling for individual demographic characteristics, baseline neighborhood characteristics, and pre-existing neighborhood-level trends, the authors compare the health outcomes of children who began the study in low-income neighborhoods that experienced gentrification between 2009 and 2015 (that is, gentrifying neighborhoods) with those of similar children who began the study in similar neighborhoods that did not experience gentrification during the same period. For the almost 72,000 children in the study, the authors examined the incidence of obesity, asthma, attention hyperactivity disorder, and anxiety or depression, and, for the years 2015-2017, the rates of emergency department visits and hospitalizations and proportions of children going to at least one well visit.

The authors’ analyses revealed the following:

But the authors did find a statistically significant difference in increases in anxiety or depression, finding a 22% higher prevalence of anxiety or depression among the children who started in areas that gentrified rapidly than among those whose neighborhoods did not gentrify. This result held even when the authors adopted different definitions of gentrification, including ones that considered changes in mean income and mean rent.

Even using different definitions of gentrification, this study provides little evidence that gentrification dramatically alters the health status of health care utilization patterns of children. However, additional research is needed to learn how children’s health may be impacted over time and across the life-course. As these children enter adolescence, it will be particularly important to examine the study’s findings of increased mental health concerns of anxiety and depression.