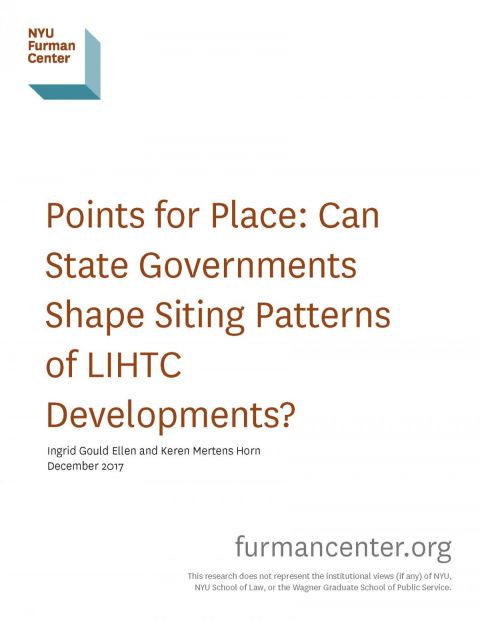 There is considerable controversy about the allocation of Low-Income Housing Tax Credits (LIHTC). Some charge that credits are disproportionately allocated to developments in poor, minority neighborhoods without additional investments and thereby reinforcing patterns of poverty concentration and racial segregation. We examine whether Qualified Allocation Plans, which outline the selection criteria states use when awarding credits, can serve as an effective tool for directing credits to higher opportunity neighborhoods (or neighborhoods that offer a rich set of resources, such as high-performing schools and access to jobs) for states wishing to do so.

To answer this question, we study changes in the location criteria outlined in allocation plans for 20 different states across the country between 2002 and 2010, and observe the degree to which those modifications are associated with changes in the poverty rates and racial composition of the neighborhoods where developments awarded tax credits are located. We find evidence that changes to allocation plans that prioritize higher opportunity neighborhoods are associated with increases in the share of credits allocated to housing units in lower poverty neighborhoods and reductions in the share allocated to those in predominantly minority neighborhoods. This analysis provides the first source of empirical evidence that state allocation plans can shape LIHTC siting patterns.