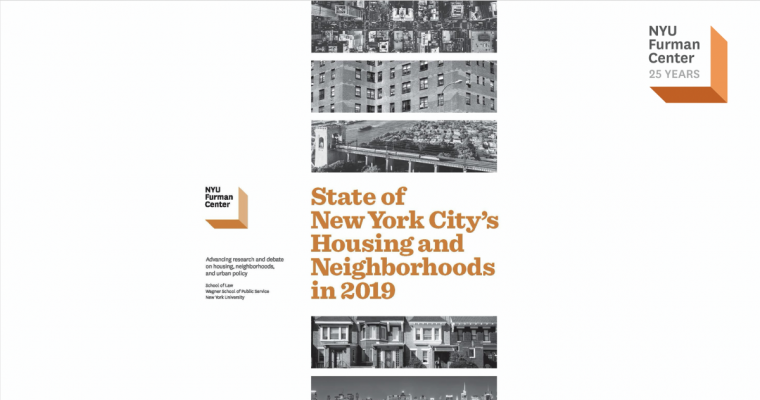 This year, in addition to neighborhood profiles and analyses of New York City’s homeowners, renters, and the city’s housing stock, the report included a focus chapter on the state of evictions in New York City. Using data from New York City housing court, the report showed that although evictions in all five of New York City’s boroughs have declined between 2016 and 2019, the Bronx consistently has had a filing rate nearly double that of other boroughs. Citywide, between 2018 and 2019, eviction filings decreased by almost 17 percent, the city’s largest annual drop in the past decade. This downward trend, however, is now threatened by the housing crisis brought on by the COVID-19 pandemic.

Strikingly, and perhaps unsurprisingly, there is significant overlap between neighborhoods that have experienced high eviction rates in recent years, and neighborhoods that have suffered from high COVID-19 infection rates during the 2020 pandemic. This finding underscores that during the COVID pandemic, affordable housing and housing stability are inextricably linked with public health.

To mark the release of the annual report, the Furman Center hosted an event featuring an introduction by Faculty Director Katherine O’Regan and a subsequent panel discussion with moderator Maria Torres-Springer, Vice President for U.S. Programs at the Ford Foundation, joined by panelists Ira Goldstein, President of Policy Solutions at the Reinvestment Fund in Philadelphia; Adriene Holder, Attorney-in-Charge of the Civil Practice of the Legal Aid Society in New York City; and Linda Mandolini, President of Eden Housing in California.

For an overview of the NYU Furman Center’s State of New York City’s Housing and Neighborhoods in 2019 report, in particular its focus chapter on eviction, watch O’Regan’s introduction here:

For an exploration of housing and eviction issues, as well as policy responses, in cities across the United States both during the COVID-19 pandemic and in the years prior, watch our panel discussion here: