Report: State Law Requires NYC to Undertax Some of Its Most Valuable Properties 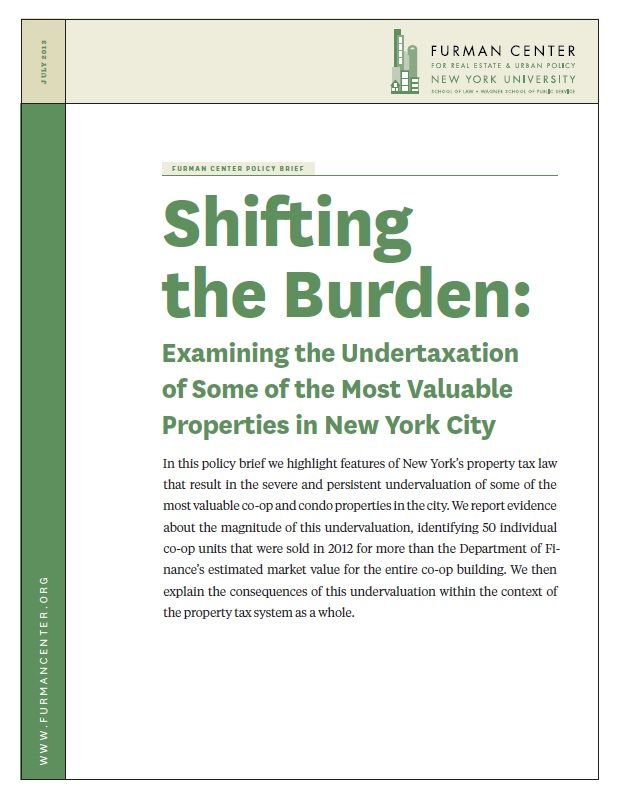 A new Furman Center report finds that some of NYC's most expensive apartments are valued at a tiny fraction of their market price, and thereby drastically under-taxed.

Shifting the Burden, released today by the Furman Center, details how some of New York City’s most valuable properties in its highest-cost neighborhoods are significantly and persistently undervalued. The report identifies 50 individual co-ops in 46 buildings that were sold in 2012 for more than the New York City Department of Finance’s estimate of the market value of the entire building.

For example, an apartment in an Upper East Side co-op building sold for $50 million, while the entire 13-unit building was valued at only $15.7 million.

The report found that 70% of the undervalued properties are concentrated in four neighborhoods: the Upper East Side, the Upper West Side, Park Slope/Carroll Gardens, and Fort Greene/Brooklyn Heights Community Districts.

This discrepancy is due to a state tax law that requires the city to value condo and co-op properties the same way it values rental properties. The Department of Finance does this by using the rents generated by "comparable" rental buildings. But, as the report highlights, this practice results in enormous undervaluation because it is impossible to find comparable rental buildings for many of these high-end properties. Often, extremely valuable coops end up being compared to rent-regulated rental buildings that have little in common with the co-op building other than the era in which the buildings were built.

This undervaluation has significant consequences for the distribution of tax burdens in New York City.

To learn more, read the full report (PDF) or see the press release (PDF). The report also builds upon the State of New York City's Housing and Neighborhoods 2011 report on the distribution of NYC's property tax.