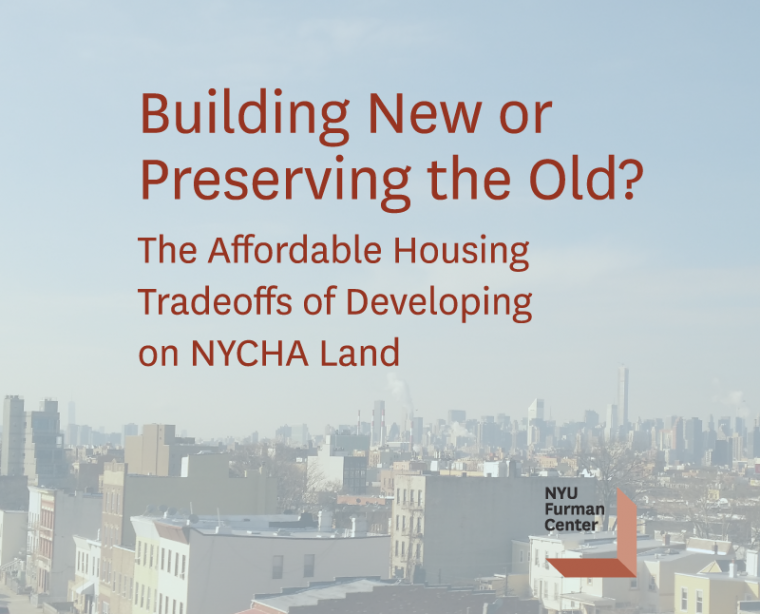 Leasing NYCHA’s underdeveloped land has significant potential to help the city meet two of its key housing goals: creating new units of housing for low- and moderate-income households without additional subsidy, and generating new revenue to help fill NYCHA’s budget shortfall. However, this potential varies widely across neighborhoods based on market rents. 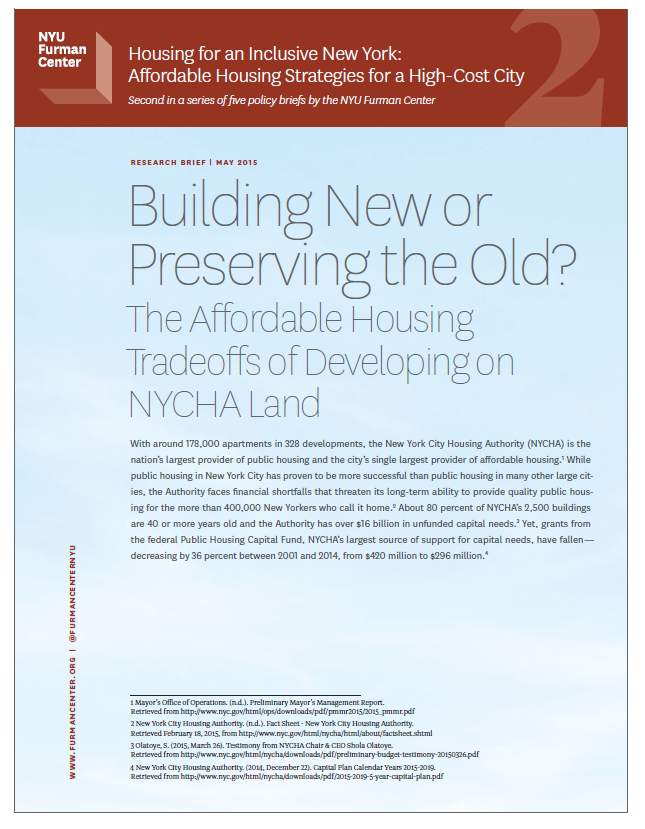 Building New or Preserving the Old? The Affordable Housing Tradeoffs of Developing on NYCHA Land (PDF), a report released today by the NYU Furman Center, finds that in neighborhoods with high rents, leasing underdeveloped NYCHA-owned land for private development could generate either substantial annual lease payments for NYCHA or significant numbers of affordable units. The potential to generate a substantial lease payment or number of affordable units drops as market rents drop. Where there is potential to lease land for development, the report quantifies the tradeoffs between generating revenue for NYCHA and creating new affordable units.

The report (PDF) used financial modeling to determine what ground lease payment and/or affordability requirements NYCHA could achieve by leasing land for development in neighborhoods with different market rents. In strong markets, such as Downtown Brooklyn, a high-rise building with 302 units could generate approximately $2.24 million annually for NYCHA while maintaining 20 percent of the units as affordable. If NYCHA chose to forego a ground lease payment and instead maximized the number of affordable units, 47.5 percent of the units in this new high-rise development could be affordable to low-income households without any additional subsidy. A compromise approach could result in an annual ground lease payment of $1.48 million to NYCHA with 30 percent of the units affordable to low-income households.

The capacity to lease NYCHA land to generate value in the form of affordable units or ground lease payments is much lower in parts of the city with lower rents. In an area with moderate rents, such as Astoria, a mid-rise development with 20 percent of the units affordable to low-income households would only generate an annual lease payment of $117,000 for NYCHA. Even with no lease payment, that development could only support making 26 percent of its units affordable to low-income households.

In places where rents are not high enough on their own to justify mid-rise or high-rise construction, NYCHA land will not generate a lease payment. However, this land can still be used to help NYC create subsidized affordable housing by making building sites readily available at low or no cost of land.

Read the report: Building New or Preserving the Old? The Affordable Housing Tradeoffs of Developing on NYCHA Land (PDF)