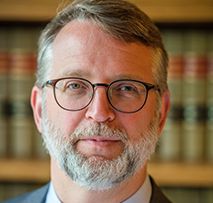 Brooklyn Law School Professor David Reiss concentrates his study and practice in real estate issues and community development. He was most recently a Visiting Clinical Associate Professor at the Seton Hall Law School Center for Social Justice. Previously, he was an associate in the New York office of Paul, Weiss, Rifkind, Wharton & Garrison in its Real Estate Department and an associate at Morrison & Foerster in San Francisco in its Land Use and Environmental Law Group. He was also a law clerk to Judge Timothy Lewis of the United States Court of Appeals for the Third Circuit.

His article, "Subprime Standardization: How Rating Agencies Allow Predatory Lending to Flourish in the Secondary Mortgage Market" in the Florida State University Law Review was granted an award as the best article of 2006 on a topic dealing with consumer financial services law by the American College of Consumer Financial Services Lawyers. His other publications include “Fannie Mae and Freddie Mac and the Future of Federal Housing Finance Policy: A Study of Regulatory Privilege” in the Alabama Law Review (forthcoming); “The Federal Government’s Implied Guarantee of Fannie Mae and Freddie Mac’s Obligations: Uncle Sam Will Pick Up the Tab” in the Georgia Law Review; "Modeling a Response to Predatory Lending: The New Jersey Home Ownership Security Act of 2002" (with B. Azmy) in the Rutgers Law Journal; “Neighborhood Entrepreneurs Program in New York City” in the ABA’s Journal of Affordable Housing & Development Law; and “Housing Abandonment and New York City’s Response” in the New York University Review of Law & Social Change.

He is a frequent contributor to op ed pages, including those of the National Law Journal, Legal Times, Christian Science Monitor and Philadelphia Inquirer and his views on a variety of real estate and land use issues have appeared in the Washington Post, Village Voice, New York Newsday, NPR, TheStreet.com, TheDeal.com and Bankrate.com, among other media outlets.