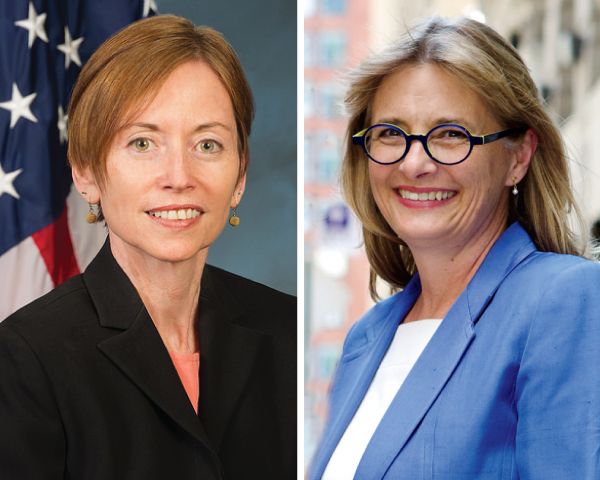 The NYU Furman Center announced additions to its leadership team today. Vicki Been, previously Commissioner of the New York City Department of Housing Preservation and Development under Mayor de Blasio, and Katherine O’Regan, previously Assistant Secretary for Policy Development and Research at the U.S. Department of Housing and Urban Development, will return to the NYU Furman Center as Faculty Directors. Faculty Director Ingrid Gould Ellen is on leave from NYU this semester at MIT’s Department of Urban Studies and Planning.

“In addition to their impressive academic credentials, Vicki and Kathy will now bring a critical perspective from their time in government service that will strengthen and inform our research,” said Jessica Yager, Executive Director of the NYU Furman Center. “We are delighted to have them back on board, working with our talented team of students and researchers, to advance our mission of providing research and spurring debate to improve the effectiveness of urban policy and programs."

Professor Been was appointed Commissioner of the New York City Department of Housing Preservation and Development by Mayor de Blasio in February 2014, and served in that role for three years. For over a decade prior to her appointment to the de Blasio Administration, Professor Been was the Faculty Director of the NYU Furman Center along with Professor Ellen. During that time the NYU Furman Center nearly tripled in size and received national recognition for its research on housing, neighborhoods, and urban policy, including a 2012 MacArthur Award for Creative and Effective Institutions and the National Housing Conference's 2013 Empire Award for Leadership in Affordable Housing.

Professor Been also returns to her post as Boxer Family Professor of Law at NYU School of Law. She holds a J.D. from NYU School of Law and is one of the nation’s leading experts on property law, land use, and housing law.

Katherine O’Regan was appointed Assistant Secretary for Policy Development and Research at the U.S. Department of Housing and Urban Development by President Obama in April 2014 and served through January 2017. She previously served as an affiliate faculty researcher with the NYU Furman Center. In addition to joining the NYU Furman Center’s leadership team, she will return to her role as Professor of Public Policy and Planning at NYU Wagner Graduate School of Public Service. Professor O’Regan holds a Ph.D. in economics from the University of California at Berkeley and spent ten years teaching at the Yale School of Management prior to joining the Wagner faculty in 2000. Her research focuses on affordable housing, poverty, and neighborhood change.