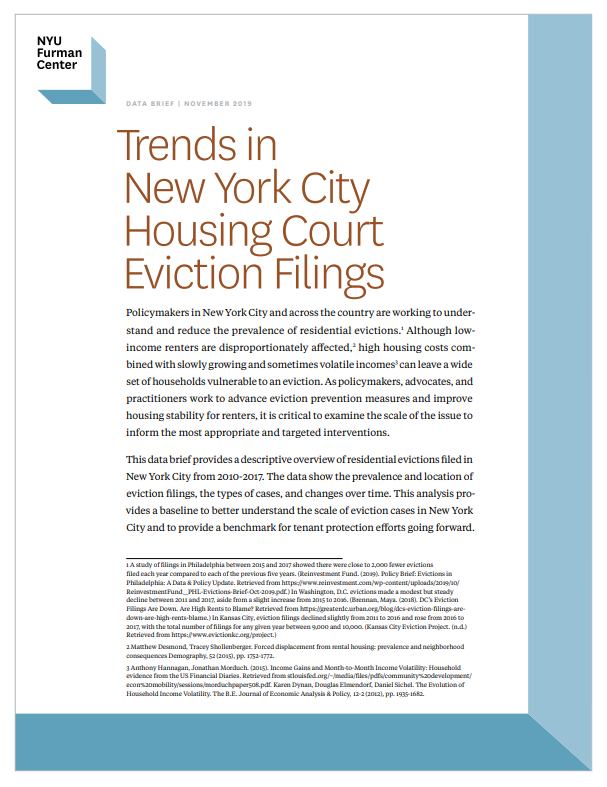 In recent years, both New York City and New York State have taken proactive steps to protect tenants’ rights, including the 2017 creation of a Universal Access to Counsel (UAC) program and, in June 2019, a series of sweeping tenant protection laws designed to stop landlords from evicting tenants on short notice or without justification. The intention behind these laws is to increase housing stability, which research associates with a range of benefits, including potentially fewer diagnoses of anxiety and depression in children. Yet without a baseline understanding of current trends in eviction filings, it will be difficult for policymakers to assess the effectiveness of these legislative interventions.

The NYU Furman Center’s new data brief, “Trends in Housing Court Eviction Filings,” shows that citywide, the total number of eviction filings is decreasing. In 2017, private landlords initiated 176,590 eviction filings, down 4.6 percent from 2016 and 7.8 percent from 2010. Of New York City’s five boroughs, the Bronx was the only one that deviated from the citywide downward trend; its number of filings increased between 2010 and 2016, and it ended 2017 with more filings than in 2010. In fact, all sub-borough areas within the Bronx saw the same or an increased eviction filing rate between 2010 and 2017.

Other boroughs also had variation among their neighborhoods, which we define as sub-borough areas. For example, Manhattan’s northern areas including Morningside Heights/Hamilton, Central Harlem, East Harlem, and Washington heights/Inwood had a noticeably higher filing rate than the rest of Manhattan, though the difference has narrowed slightly over time. We’ve also added the eviction filing data to CoreData.nyc so users can explore the neighborhood-level trends and information in detail.

Citywide, 84.3 percent of 2017 eviction filings were nonpayment cases. Although the number of nonpayment filings has decreased steadily since 2011, the number of holdover cases increased annually from 2010 to 2016 and then declined from 2016 to 2017. Of all non-payment and holdover filings, 60.3 percent of 2016 cases resulted in judgments, a 0.2 percent increase from 2015 and a 9.4 percent increase from 2010. The share of holdover cases resulting in judgments rose significantly faster than the overall rate, with 47.2 percent more cases resulting in judgments in 2016 than 2010. Nonpayment filings have claimed between 2.5 and 3.0 months of rent owed with less than a 1% variation in real dollars between 2010 and 2017.

The three neighborhoods with the highest filing rate citywide were in the Bronx: Highbridge/Concourse, Morrisania/Crotona, and Hunts Point/Longwood. Eviction filing rates in Brooklyn were concentrated in the central and eastern part of the borough, though rates generally have declined over time, with the exception of the Brownsville and East New York neighborhoods. Two of the three neighborhoods with the lowest eviction filing rates citywide were in Brooklyn: Park Slope/Carroll Gardens and Williamsburg/Greenpoint.

These numbers don’t tell the whole story; they only capture the displacement that occurs through the court, not through other non-legal channels. Nevertheless, the trends from this study indicate an increase in rental stability from 2010 to 2017, though this stability is not felt evenly throughout the five boroughs. As New York City implements its new tenant protection laws, these figures will help us isolate what impact new safeguards have on renters. In addition, the NYU Furman Center plans to incorporate population demographics, building conditions, and neighborhood characteristics into future research to further our understanding of the contributing factors behind city eviction trends.