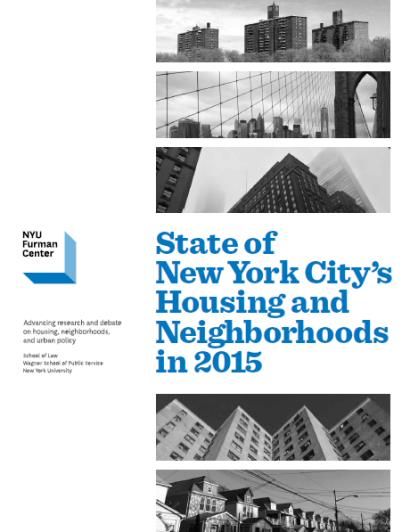 On May 9, 2016, the NYU Furman Center released its State of New York City's Housing and Neighborhoods in 2015 report, which provides a compendium of data and analysis about New York City’s housing, land use, demographics, and quality of life indicators for each borough and the city’s 59 community districts.

Focus on Gentrification: This year’s “Focus on Gentrification” (PDF) chapter explores gentrification within the context of New York City's neighborhoods to better understand the changes that accompany rapidly-rising rents. Of the city's 55 neighborhoods, the report classifies 15 as "gentrifying" and analyzes how their housing and population have changed over the past two decades. It finds that they have seen greater growth in the shares of the population that are young adults, college-educated, white, and living alone or with roommates, as compared to other neighborhoods.​

Neighborhood Data: The data section provides current and historical statistics for over 50 housing, neighborhood, and socioeconomic indicators at the city, borough, and community district levels. It also includes indicator definitions and rankings; methods; and an index of New York City’s Community Districts and Sub-Borough Areas.

Launch Event - By the Numbers: Gentrification: On Monday, May 9, 2016, the NYU Furman Center marked the launch of its report with a panel discussion on gentrification. The research presentation (PDF) reviewed key findings from the report, and the panel discussed whether and how cities with rapidly-rising rents should respond to such changes. Watch a video of the research presentation and panel >>

View the press release or read the report.