School Climate and the Impact of Neighborhood Crime on Test Scores 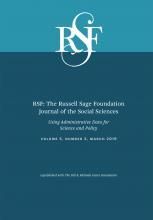 During the last quarter century, crime rates in American cities plummeted, and recent data indicate that this encouraging trend continues. Yet violence mars everyday life for many children across the United States, and a growing body of evidence suggests that neighborhood violence has a negative effect on children’s academic performance. Many factors, both within and outside the four walls of a school building, contribute to a student’s academic performance; still, we know little about the extent to which school climate--that is, how safe, orderly, and welcoming students regard their school--moderates the pernicious effects of neighborhood violence.

The authors also find different effects for different gender and racial groups. The negative effect of exposure to neighborhood violence seems concentrated among boys attending schools with weak climates; in fact, the authors observe no performance effect for girls. Troublingly, the data reveal that black students are overrepresented in schools with weak school climates. And black and Hispanic students exposed to neighborhood violence before a standardized test who attend schools perceived to be less safe see performance on English Language Arts exams dip, on average. The analyses by subgroup “uncover that the effect of exposure to violence is particularly salient for boys and Hispanic students in schools deemed the least safe.”

While the authors take heart in the evidence suggesting that “many schools are safe havens for young people who live in dangerous neighborhoods, insulating them from the acute effect of exposure to violence on achievement,” they encourage further exploration of the following questions: