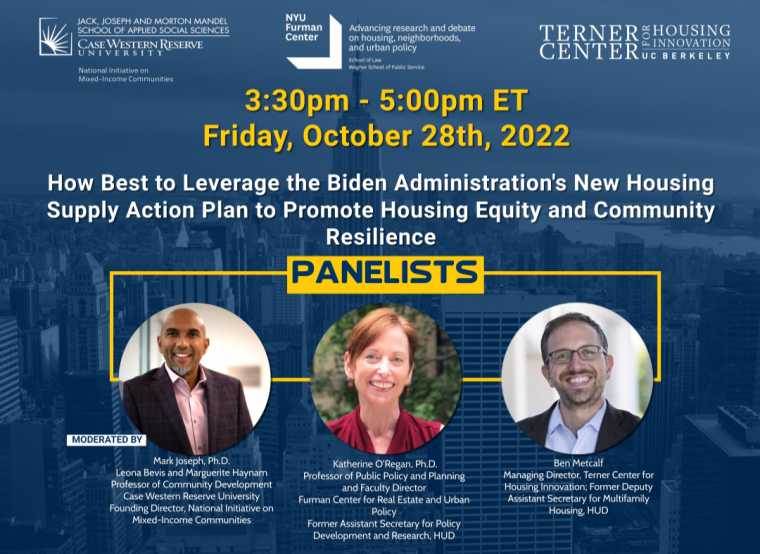 Proclaimed “the most comprehensive of all government efforts to close the housing supply shortfall in history,” the Biden-Harris Administration released a Housing Supply Action Plan in May 2022 to address the nation’s housing shortage. To discuss the plan and its implications at the local level, The National Initiative on Mixed-Income Communities at Case Western Reserve University’s Jack, Joseph, and Morton Mandel School of Applied Social Sciences, the NYU Furman Center for Real Estate and Urban Policy at New York University’s Wagner School of Public Service, and the Terner Center for Housing Innovation at the University of California, Berkeley held a joint webinar on October 28th.

The panel featured NYU Furman Center Faculty Director Katherine O’Regan and Terner Center Managing Director Ben Metcalf. The webinar was moderated by the National Initiative on Mixed-Income Communities’ Founding Director Mark Joseph, who kicked off the session by introducing the speakers and facilitating a brief discussion on each speaker’s recent research.

Turning to the housing plan, the panelists provided context for the government’s policy efforts and summarized the plan’s thirteen pages into three major components: financing, regulation, and innovation. For each category, they shared what they found to be most promising as well as what aspects posed potential challenges. In particular, the speakers focused on the administration’s plan through a racial equity lens, and spotlighted both wins and areas for improvement. The first component of the plan focuses on improving and expanding financing options to build all forms of housing. One example includes deploying new mechanisms to fill financing gaps for manufactured housing, Accessory Dwelling Units (ADUs), and smaller multifamily properties.

Metcalf called out that this seemingly small change may have a big impact, particularly in the increasingly popular ADU space. He pointed to a case study in California, where there are an estimated 1.2 million possible ADUs. Though initially ADUs were disproportionately built by whiter, wealthier households, recent changes by Freddie Mac made it easier for homeowners, particularly those who are lower income and BIPOC, to qualify for a loan and invest in adding ADUs.

“It’s a technocratic fix to a complicated federal insurance program, but it really ripples down to the bank on the corner on whether or who they’ll loan to, and which neighborhoods to do these kinds of renovations,” he said.

O'Regan pointed to the piloting of new financing tools at the federal level as the most promising aspect of this category. She emphasized the advantage of having the federal government help lift up and scale programs that can be adopted across the nation.

“It’s not just doing more of what we already do, it is putting the risk of trying to develop new things, which is a very appropriate thing for the government sector.”

Still, she emphasized that for the plan’s financing components to work, the government needs to go big with “bold, radical changes.” Additionally, she warned that beyond just building, the government should also think about racial equity measures to ensure broader access to housing.

“We worry a lot about where LIHTC gets produced, but we’re doing nothing at the federal level of understanding who gets in,” she said.

The plan’s second focus involves pushing local and state governments to change and improve their regulatory practices by adopting more expansive zoning and moving away from exclusionary practices. It’s a significant move coming from the federal government, which typically does not put “local regulatory barriers in its crosshairs,” as Metcalf remarked. Both panelists emphasized throughout the webinar that local restrictions largely underlie our nation’s housing crisis and making critical changes at this level are paramount to solving the widespread problem.

“The crux is that the control over whether or not to create housing and what kind is local and hyper local,” O'Regan said. “The social and economic effects of the choice not to create housing are felt much more broadly to the state and community. In the last five to ten years, the inadequate supply of housing has increased costs that have decreased interstate and intermarket mobility, which decreases GDP. The estimate is that GDP growth could've been 36 percent higher if we didn’t have restrictive local zoning.”

Thus, direction from the federal level to influence local change is essential. The most notable aspect of this in the plan involves linking major transportation program funding to a jurisdictions’ progress on moving away from exclusionary housing policies. While the intent is laudable, Metcalf warns that determining if a locality’s practices are truly inclusionary can be challenging, though not impossible.

“There’s certainly an opportunity here for the federal government to really help lead the way in terms of facilitating a culture of evidence and data as to what of these local regulatory barriers actually matter for facilitating mixed income, diverse communities that are not exclusionary,” he said.

The third pillar of the plan prioritized spurring more public and private sector innovations to supply housing more efficiently. It aims to elevate research and development to find creative ways of making manufacturing easier and less expensive, which would lead to more naturally affordable housing.

“The housing construction sector has really seen very little innovation in the last several decades,” Metcalf said. “If we’re really focusing on this as a multi-decade game that we have to play then I think we need to be making early investments in core research and development and new building technologies.”

O’Regan also mentioned recent innovations that can help markets struggling with displaced assets, such as converting commercial and office space to housing.

“It’s about getting the markets to work well and the role of governments in making them work well. Sometimes it’s about changing use,” she said.

Overall the panelists praised the Housing Supply Action Plan and were impressed by the large scope of its goals.

“To say that the housing supply problem is a federal problem, not a HUD problem, is important for making any progress,” said O’Regan. “The focus is much broader than subsidized housing and is larger than affordable housing- it’s about all housing, which is critical to the affordability problem...That it is thinking system wide.”

As expansive as this federal plan is, the panelists underscored that America’s housing supply shortage cannot be fixed by intervention at the federal level alone, and that an array of local and state entities, including community groups, need to work together to make considerable progress.

“Certainly there’s a lot the federal government can and should do to be impactful but there’s a lot needed at the local level to truly solve the great challenge,” O’Regan said.

Alex Roth is an MPA-PNP student specializing in Advocacy and Political Action at NYU Wagner. With seven years of experience in communications, events and partnerships, she aims to apply her education and professional background toward expanding access to opportunity and equity. Alex grew up in Hawaii and currently resides in Brooklyn, which she considers home. Alex holds a B.A. in Communications and Japanese from the University of Hawaii at Manoa and an M.B.A from Argosy University Honolulu.