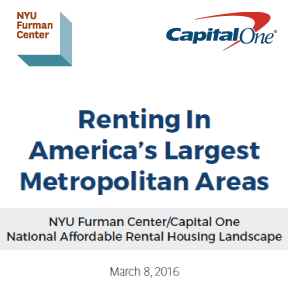 The renter population grew in both central city and suburban areas while more renters struggled to find affordable housing in the 11 largest metropolitan areas in the US, according to the newly-released NYU Furman Center/Capital One National Affordable Rental Housing Landscape report.

The Landscape examined rental housing affordability trends in the nation’s largest metropolitan areas, including Atlanta, Boston, Chicago, Dallas, Houston, Los Angeles, Miami, New York City, Philadelphia, Washington, DC and San Francisco from 2006 to 2014 and identified the impact these trends had as the renter population increased while affordable housing rates continued to decline. “Affordable” rent should comprise less than 30 percent of a household’s income.

See the infographic with the report's key findings, or read a summary below.

Metro Profiles: View the metro area-specific findings for the 11 largest metro areas in the US

The renter population is increasing throughout metropolitan areas

Affordable housing out of reach for many

Considerable gap in supply and demand

The overwhelming majority of low-income renters were severely rent-burdened