REPORT: Growth in NYC’s Housing Stock is Outpaced by Growth in Adult Population and Job Growth 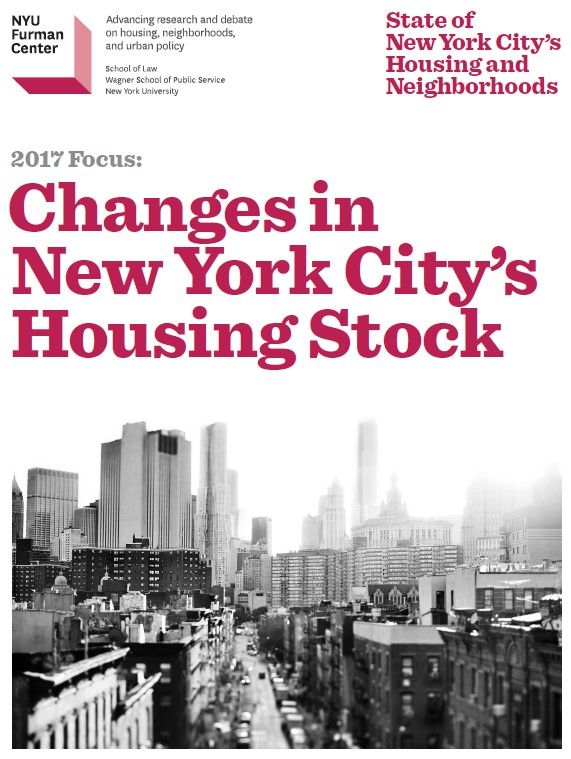 A new report by the NYU Furman Center examines the characteristics of New York City’s housing stock, providing data on how the stock has changed over recent decades and analyzing how increases in the supply of housing compare to indicators of increases in demand. Despite growth in the number of housing units in New York City, the report identifies a number of signs that the growth is not adequately moderating the pressures on rent resulting from a growing adult population, a further shift in the city to adult-only households, and significant job growth.

The report finds that there are many indications that new supply in the city is not growing fast enough to adequately moderate the pressures on rent and housing prices created by increasing demand. Household size has increased, and more renter households are living in severely overcrowded units; the city’s vacancy rate remains very low; and the share of recently available housing units in the city affordable to low- and moderate-income households has fallen significantly since 2000. The report also highlights a mismatch between incomes and the cost of housing units on the market. Median monthly rents have risen in real dollars by about $300 since 2000, at the same time that the median income of a renter household has only increased by $145 per month.

The report also describes where in the city housing has been built recently. The largest number of new units built since 2000 was in the Chelsea/Clinton/Midtown area of Manhattan, which added more than 28,000 units, double the number of units added in the next neighborhood on the list (Williamsburg/Greenpoint). The report also finds that the neighborhoods with the highest number of units authorized for new construction by building permits issued between 2015 and 2017 are the same neighborhoods where the most new units were built between 2000 and 2016: Brooklyn Heights/Fort Greene, Sunnyside/Woodside, Chelsea/Clinton/Midtown, and Williamsburg/Greenpoint. At the same time, 25 neighborhoods added fewer than 3,000 units to their stock since 2000, and most of those also had few new units authorized by building permits issued recently.

The report also details how the city’s housing stock has changed over the years. Studios and one-bedroom units made up the largest share of units in 2016; and more of the new units in each decade since 1980 have been studios and one-bedrooms, with almost 50 percent of units built since 2010 falling in those categories. While New York City is known for its multifamily buildings, there were over a half million single-family homes in the city in 2016, or 16% of the city’s stock. Even between 2010 and 2016, almost 9% of the new construction was single-family homes.  More than 80% of the new construction was occupied by renters in 2016, and the renters in new buildings had median incomes that were almost one-third higher than the median incomes of all renters.

“Despite considerable growth in the city’s housing stock, that growth has been outpaced by the increase in the city’s adult population and by job growth. The increasing housing stock has not been able to adequately moderate the pressure on rents caused by increased demand, and the stock as a whole has become less affordable, especially for the 70% of New Yorkers with low or moderate incomes,” said Vicki Been, Faculty Director of the NYU Furman Center. “This analysis highlights the need for more housing production in general, especially for more housing that is affordable to low- and moderate-income households.”

Read the State of New York City's Housing and Neighborhoods in 2017 or view the indicators on CoreData.nyc.

LAUNCH EVENT: To mark the launch of the report, the NYU Furman Center will host an event, By the Numbers: Changes in New York City's Housing Stock, on Thursday, May 24, 2018 from 4:00-7:00 p.m. EDT at NYU School of Law. Open to the public, but advance registration required. Also available on livestream, which will be broadcast from 4:00-6:00 p.m. EDT.

One-bedroom units and studios made up the largest share of units in the city in 2016, followed by two-bedroom units, then units with three or more bedrooms.

The areas of the city that have seen the most new construction since 2000 are the same places where the most building permits were issued between 2015 and 2017.

Indicators of housing demand (change in the adult population, the share of households that are adult-only and the size of those households, and the number of jobs in the city) have all increased since 2000.

Measures of the adequacy of the housing supply in the city suggest that more housing is needed, especially to serve low- and moderate-income households.