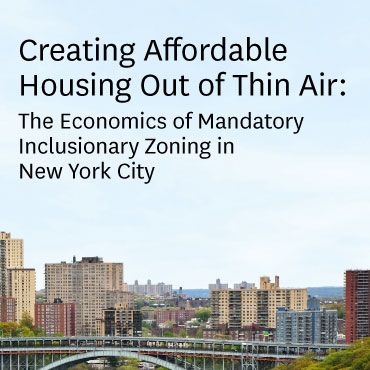 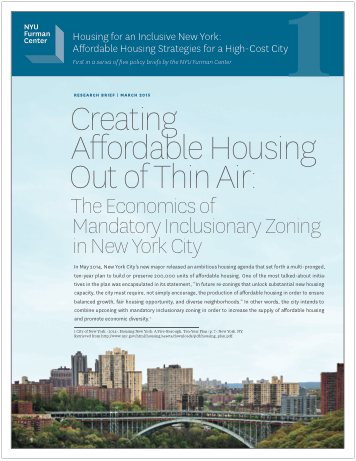 The report, Creating Affordable Housing Out of Thin Air (PDF), finds that a mandatory inclusionary zoning policy in New York City has the potential to produce affordable units in neighborhoods that already command relatively high rents, such as Downtown Brooklyn. But the city’s low-rent neighborhoods—such as East New York in Brooklyn and the Jerome Avenue corridor in the Bronx—may not have sufficient market strength to justify high-density mixed-income development without other forms of subsidy.

The study used financial modeling to replicate how a typical developer might determine the feasibility of developing in various NYC neighborhoods considering different scenarios of market rents, building types, and affordability requirements. The model also considers the impact of property tax exemption, like 421-a, a program set to expire in June.

In many of the city’s neighborhoods, rents are likely insufficient to justify new mid- and high-rise construction, let alone cross-subsidize the creation of new affordable housing through upzoning. In high-rent markets, however, the analysis shows that additional density is valuable; and much more so when combined with the 421-a property tax exemption. For example, for a high-rise building in a very high-rent neighborhood, the city could require that about 28 percent of any additional zoning density be affordable if the building is subject to full property taxes. This share increases to 61 percent with full property tax exemption. The amount of affordable housing that can be required where the city upzones will also vary widely based on building type, local market rents, and how much additional density the upzoning adds.

The report highlights many of the crucial policy choices and tradeoffs that designing a new mandatory program will require. It also points out that the economics of a mandatory inclusionary zoning policy will shift over time.

BRIEFING WEBINAR: Researchers from the NYU Furman Center hosted a webinar briefing on Thursday, April 2, 2015. View a video recording of the webinar or download the presentation slidedeck (PDF). Register now >>