Three years ago today, Superstorm Sandy made landfall in New York City bringing with it a storm surge that flooded the city's streets and subway tunnels. The storm splintered boardwalks, flooded storefronts, and darkened lower Manhattan. In addition to these public manifestations of destruction, Sandy affected the lives of many New Yorkers; the storm surge reached nearly 9% of the city’s housing units. The vast majority of affected units were in multifamily residential buildings, underscoring the need to prepare this housing type for future storm events.

Retrofitting the nation’s multifamily housing stock to withstand more regular flooding events presents design and financial challenges that are distinct from those posed by single-family homes. A dialogue among policy researchers, housing industry professionals, and city governments has emerged to provide solutions to the thorny problem of adapting multifamily housing for future storms. 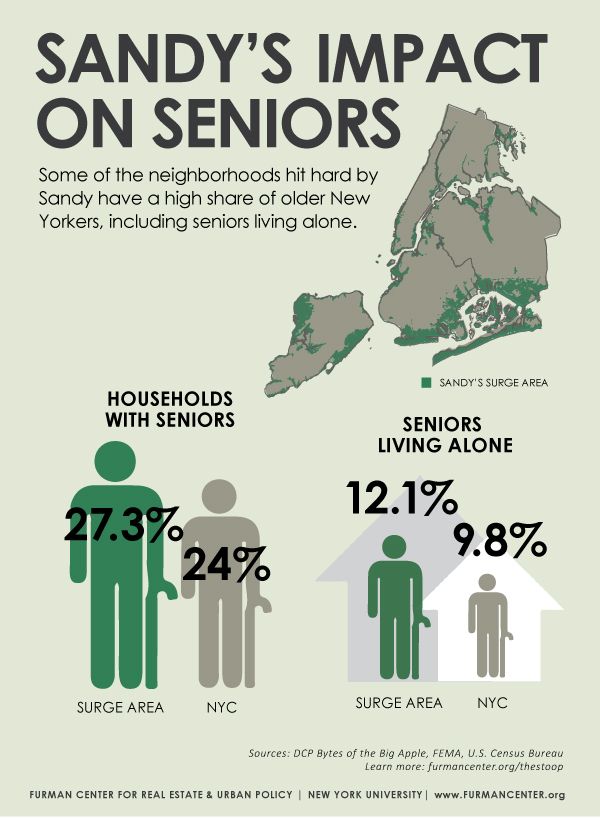 Infographic: In the Path of the Storm

"Over 90% of the multifamily buildings in [New York City] areas vulnerable to flooding were built prior to 1983, when flood-resistance standards were added into the building code."
-Jessica Yager, NYU Furman Center Deputy Director, in The Cost of Retrofitting Multifamily for Resilience Urban Land: The Magazine of the Urban Land Institute, July 2014

Make It Right, a non-profit organization in New Orleans, has created an affordable neighborhood in the city's Lower Ninth Ward. The organization “will mark the 10th anniversary of Hurricane Katrina and the 2005 flood with the unveiling of a high-tech mini house meant to sell for less than $100,000. …The two-story home has a 28-by-12.5-foot footprint, with 430 square feet of interior space.” Nola.com (Doug MacCash), 8/18/2015