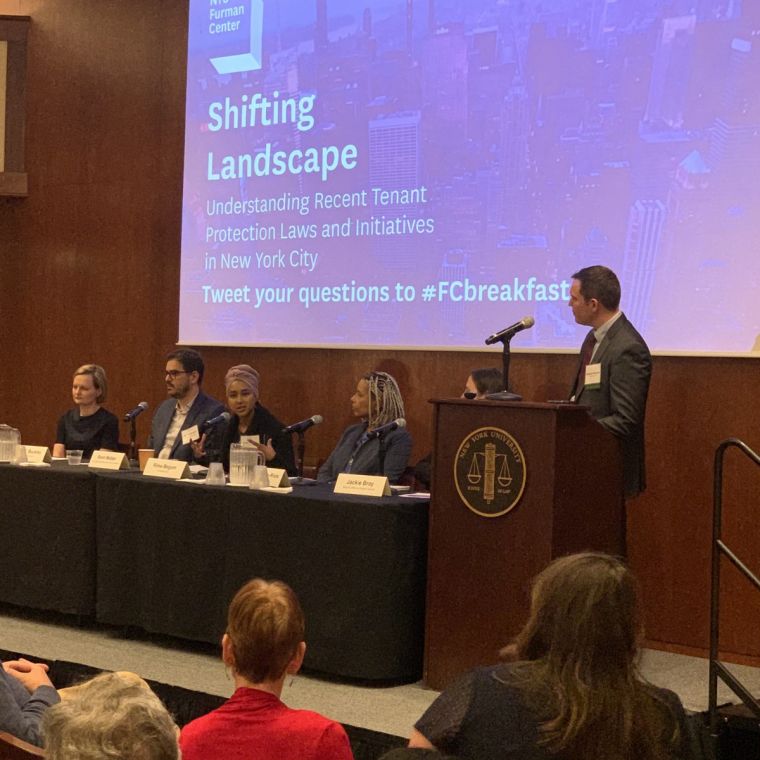 On October 15th, the NYU Furman Center held a policy breakfast titled Shifting Landscape: Tenant Protection Laws and Initiatives in New York City. The breakfast included a diverse panel of experts who shared their perspectives on the impacts of recent tenant protection laws intended to curb harassment and improve residential stability. Panelists discussed the impacts on tenants, landlords, and city agencies and debated the need for more or less regulation.

As context for the conversation, the Furman Center’s Executive Director Matthew Murphy reviewed a selection of local laws enacted since 2014, which included laws that broadened the definition of tenant harassment, initiated the landmark universal access to counsel program, and a host of measures that increased scrutiny of building permit applications.

Members of the expert panel included:

While opinions on the panel varied, panelists agreed that implementation and enforcement of these laws is particularly challenging. Jackie Bray of the Mayor’s Office to Protect Tenants described proactive enforcement as an important role of her recently created office, and discussed their work to assemble data, identify and curb new abuses, and work with advocates to educate tenants.

Multiple panelists agreed that there is a critical need for more education about the tenant protection laws, for both tenants and landlords. Erica Buckley of Nixon Peabody LLP raised concerns that landlords have difficulty navigating the increasingly complex regulatory landscape, and suggested that the City put more effort specifically into educating landlords. Tenant Organizer Rima Begum of CHHAYA CDC called for more tenant education resources in multiple languages, to ensure all residents can access information about their rights under the law.

Legal Aid attorney Magda Rosa Rios and Rima Begum both supported additional regulations that would target specific landlord behaviors, explaining that when it comes to implementation, vague laws are less useful. Erica Buckley proposed streamlining existing laws to reduce their complexity and burden.  Several panelists suggested that the complex laws are necessary given the industry’s limited track record of self-policing over the past several decades. Brent Meltzer from the Office of the Attorney General further suggested that there are not necessarily more regulations now than in the past, but that previous regulations were more skewed in favor of landlords.

While none of the panelists described the regulations as a standalone solution to issues of harassment and housing instability, several pinpointed key advantages to the new laws. In particular, Magda Rosa-Rios highlighted how organizations such as the Legal Aid Society are now able to bring HP proceedings for harassment as a component of their litigation strategy. She also articulated areas in which current tenant protection laws fall short of fully stabilizing communities, namely in addressing skyrocketing rents and creating (rather than just preserving) affordable units. Still, Brent Meltzer was hopeful that the recent rent law reforms would tamp down on the incentive to speculate. Outside of tenant protection laws, panelists highlighted stagnant incomes as a key factor that needs to be addressed as part of improving access to housing.