Policy Breakfast: Measuring the Success of Housing Our Neighbors 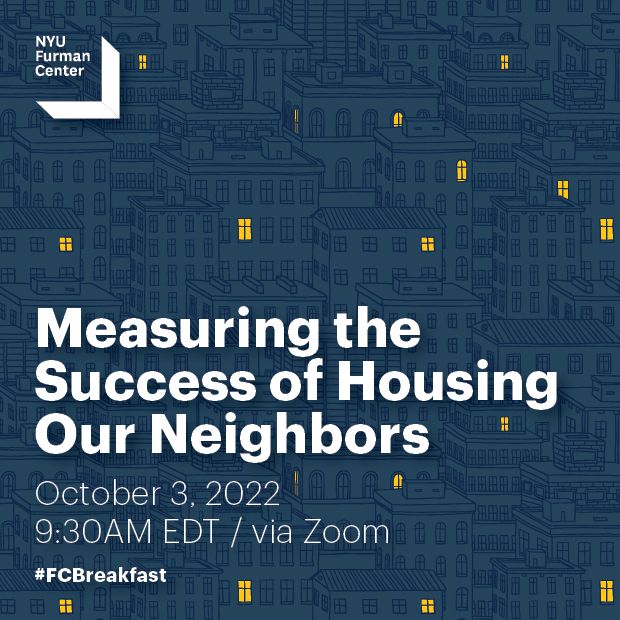 On Monday, October 3, 2022 NYU Furman Center held a hybrid Policy Breakfast titled Measuring the Success of Housing Our Neighbors. The discussion examined the five-pillar plan entitled Housing Our Neighbors, which the Adams Administration released earlier this Spring to address New York City’s affordable housing and homelessness crisis. The plan promised to “put people above paperwork and measure our success based on how quickly we can move New Yorkers into affordable housing, and not just how quickly we can close the deal.” Panelists discussed how to evaluate progress towards the city's housing goals, and the factors and data that can be used for guidance.

NYU Furman Center’s Director of External Affairs Charles McNally set the stage by sharing background on the Housing our Neighbors plan and some of the metrics used to measure success and progress. View the presentation, which outlined the plan’s five key objectives: transforming the New York City Housing Authority (NYCHA), addressing homelessness and housing instability, creating and preserving affordable housing, improving the health and safety of New Yorkers, and reducing administrative burden. Progress for each of these objectives is measured through the Mayor's Management Report (MMR), which is published annually and mandated by New York City's charter. This year's report included a citywide focus on equity indicators for every agency throughout the government.

Policy Breakfast: Measuring the Success of Housing Our Neighbors from Furman Center on Vimeo.

Katz started the discussion by highlighting the importance of the MMR in informing the government's day-to-day work and conveying the administration’s values through the priorities outlined. One of the priorities she shared was focusing on New Yorkers as human beings and reflecting that through the metrics used to define success. For instance, identifying how many New Yorkers move into apartments as opposed to simply counting the number of new units built, though housing counts were acknowledged as an important metric. “When's the champagne toast? Is it the day that we sign all the documents and say we're going to build the thing? Or is it the day that someone gets to move into the apartment,” said Katz.

The panelists agreed that focusing more holistically on the experience of New Yorkers was important. Grier emphasized that the term “affordable housing” does not necessarily make clear who housing is affordable for, and instead said “income-targeted housing” helps provide a better framework of measuring whether the right housing is being developed for the households that need it. “If the demand is that you need housing for families at a certain income level, is that being built? And what's the measure of that percentage to what's being built across New York City?” said Grier.

Sewell agreed with focusing on the resident experience, particularly in public housing. She also stressed the importance of making sure that people stay stably housed after moving in. “The churn out of housing in New York is really insidious…When we're placing people into housing, are we making sure that they're stable and that they're not going back into the shelter system, for example.” said Sewell.

Understanding how New Yorkers experience housing through administrative burdens was a common theme throughout the conversation. If building units and making them available is on one side of the equation, the other is ensuring residents can navigate the City’s nebulous housing system to move into those units. That process is currently extended by a “time tax” of paperwork, learning curves, and mental effort that many New Yorkers are all too familiar with.

The Housing Our Neighbors plan aims to make the frustrating experience shorter and easier for residents by assessing how long every stage of the process is taking, as well as looking at the efficiency and effectiveness of delivering affordable housing resources. The panelists also discussed the importance of reducing these burdens, and doing so by questioning why certain processes exist and tracking measurements that can lead to action.

“Once you start measuring, it shines a light on it in a way that creates opportunity within the agencies and within the other constellation of partners that work with us to start thinking about what should go faster, because right now there's really no incentive to do that,” said Katz.

Even with a robust set of goals and metrics to measure success, there are often unforeseen challenges that can derail plans. When asked how to adapt to changing headwinds, Hartzog said, “Having that ability to pivot and shift and be flexible is critical and important. Not to be so much, you know, ‘We've got to reach this end goal. We've gotta drive toward without seeing what's in front of you.’ Because that's when things can go completely the wrong way.”

There was broad consensus around the importance of goals and metrics as not only a form of accountability and transparency, but also as a way to help drive internal policy when dealing with competing priorities across various stakeholders. “Metrics matter when you're having to push all these agencies from a City Hall vantage point to come together on a common agenda,” said Hartzog.

Certainly meeting the goals of the Housing Our Neighbors plan and achieving the cultural shift mentioned throughout the discussion will require participation from a coordinated ecosystem of stakeholders beyond City Hall. Throughout this process, listening to and meeting the needs of the community will remain essential. “We still have to be engaged with the people that have lived experience to inform what's going to go on in the future,” Grier said.

Alex Roth is an MPA-PNP student specializing in Advocacy and Political Action at NYU Wagner. With seven years of experience in communications, events and partnerships, she aims to apply her education and professional background toward expanding access to opportunity and equity. Alex grew up in Hawaii and currently resides in Brooklyn, which she considers home. Alex holds a B.A. in Communications and Japanese from the University of Hawaii at Manoa and an M.B.A from Argosy University Honolulu.