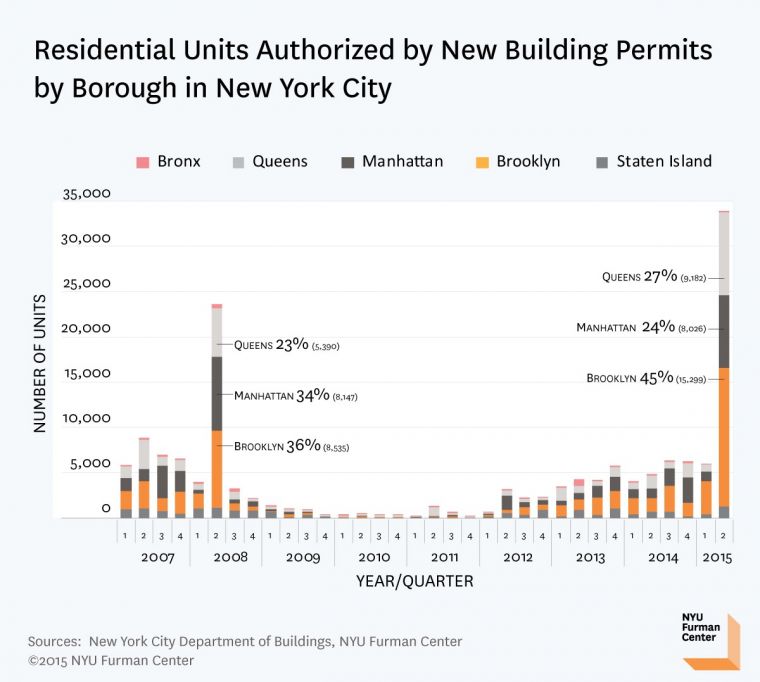 In the second quarter of 2015, New York City authorized 33,910 housing units for new construction—over five times the number of residential units authorized the previous quarter. The rush for permits occurred as Albany debated the fate of the 421-a property tax exemption in the face of a June 15, 2015 deadline for renewing the program.

421-a offers a tax break to residential developers, but in the so-called geographic exclusion area (GEA), the tax benefit is contingent on a developer setting aside 20 percent of units as affordable for low-income tenants. The law was set to expire in June 2015, and until then it was unclear if the state legislature would renew the program, let it expire, or modify the affordability requirements. Given the uncertainty surrounding the program, some developers may have tried to get their permits issued before the deadline, thus ensuring their projects would be governed by the old law. Indeed, nearly 40% of permits filed in the quarter, authorizing nearly half the units authorized in the quarter, were filed in the two weeks before the deadline.

The city saw a smaller spike in the second quarter of 2008, which also preceded a potential expiration of the 421-a program.

Compared to the second quarter of 2014, the number of units authorized by new building permits increased in all five boroughs, but especially in Queens, Manhattan, and Brooklyn; more than 95% of the newly authorized units were in those three boroughs. 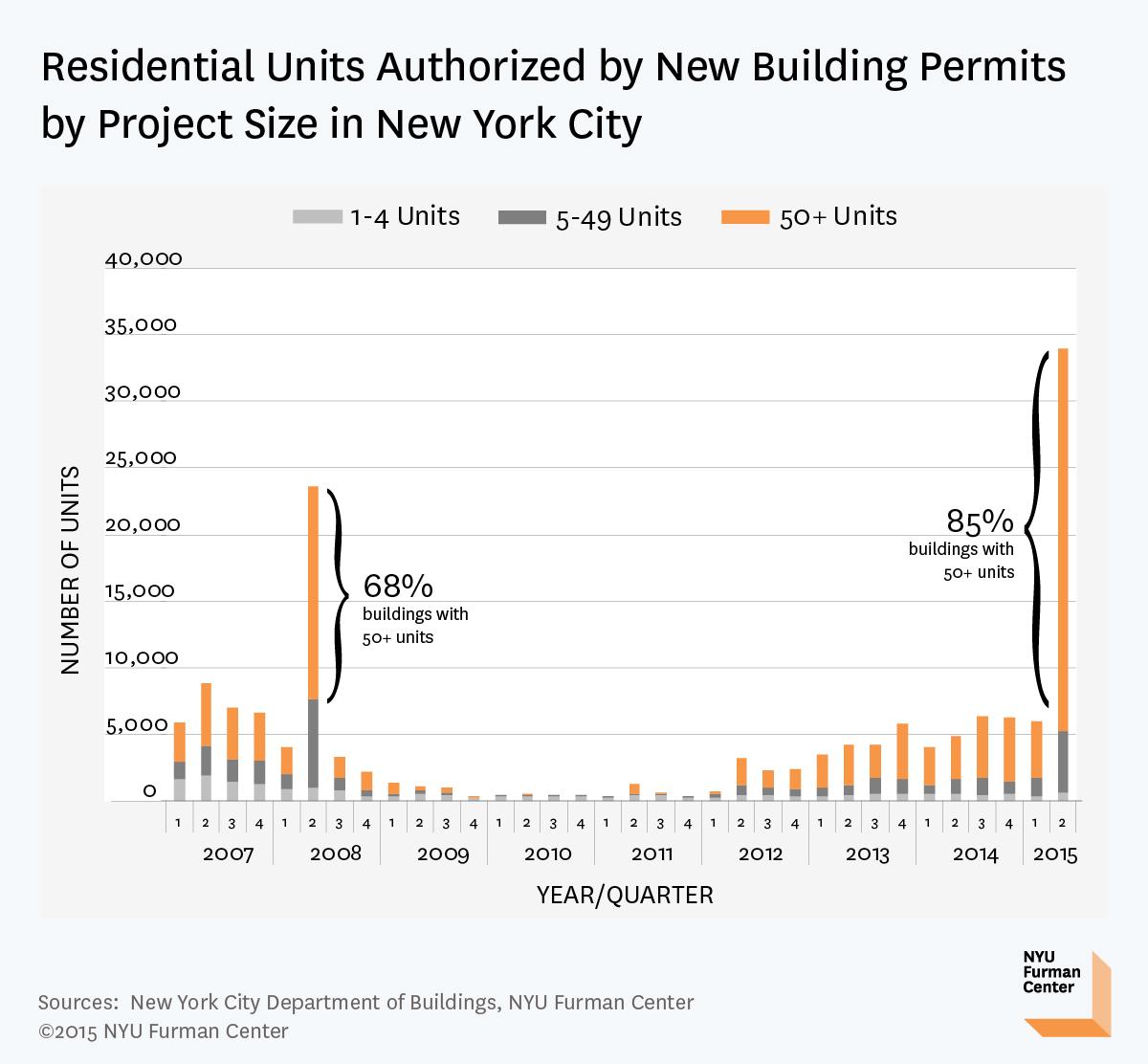 The map below shows the location and project size (based on number of units) of developments receiving new building permits. The blue shaded area represents the geographic exclusion area: the portion of the city in which developers must create affordable units in order to receive the 421-a benefit (as of 2015 Q2).

Sixty-two percent of units and 31% of new developments approved in the second quarter of 2015 were located in the geographic exclusion area. 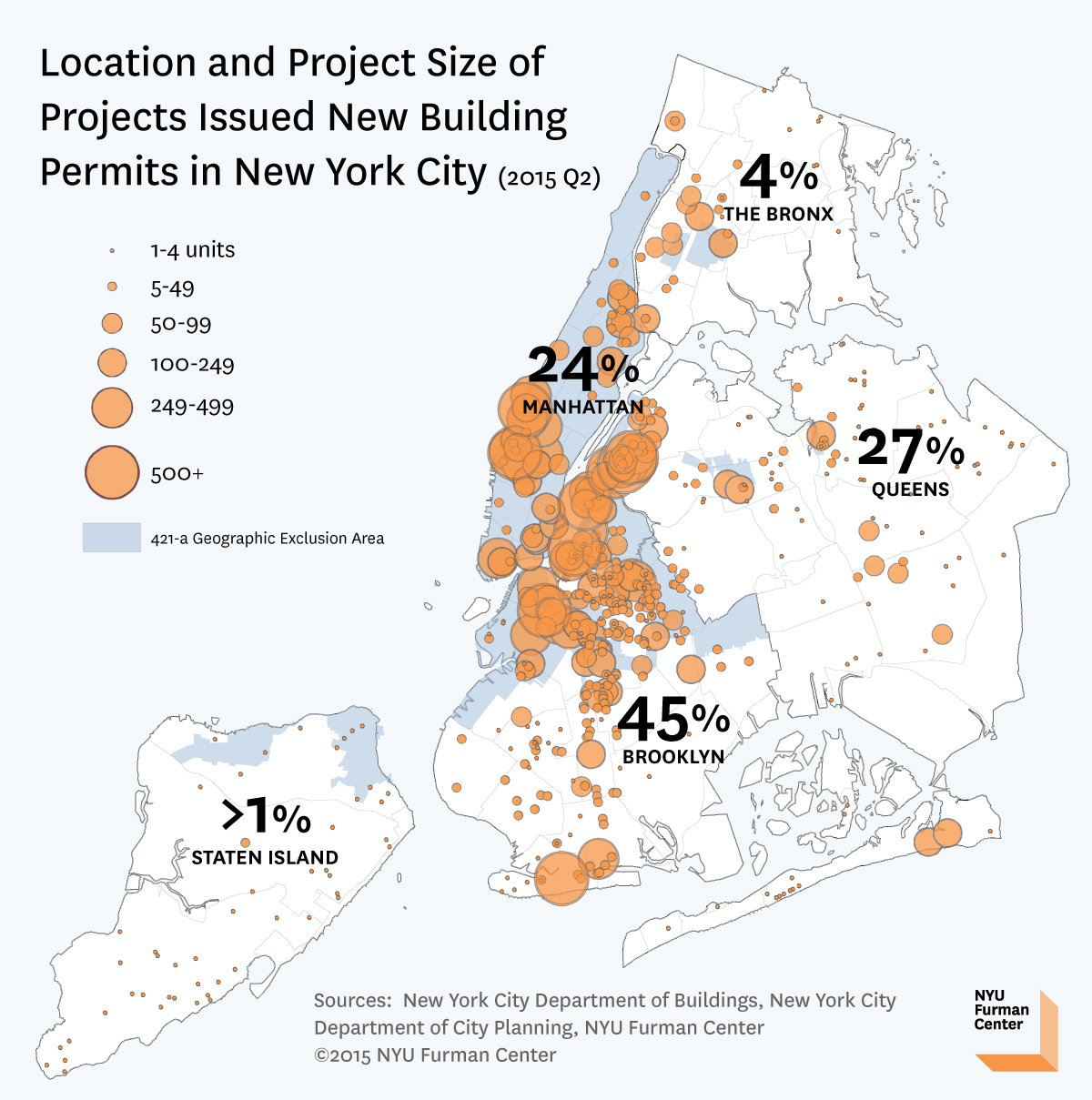 In June 2015, the 421-a program was extended without changes through December 2015. Beyond that, the future of the program is uncertain.