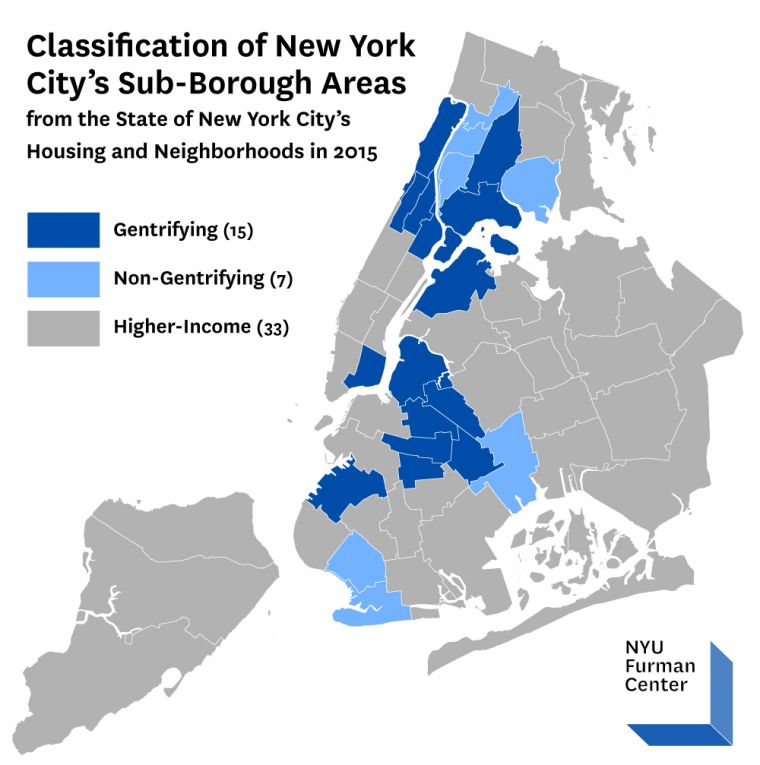 A special report on gentrification (PDF) by the NYU Furman Center explores gentrification within the context of New York City's neighborhoods. Of the city's 55 neighborhoods, the report classifies 15 as "gentrifying" and analyzes how their housing and population have changed over the past two decades.

The analysis was released as part of the NYU Furman Center's 15th annual State of New York City’s Housing and Neighborhoods in 2015 report, which provides a compendium of data and analysis about the city's housing and neighborhoods. Additionally, the report defines “gentrifying” neighborhoods as areas that were relatively low-income in 1990 (among the bottom 40% in the city), but then experienced higher than median neighborhood rent growth in the following 20 years. Using these criteria, 15 of the city's 55 neighborhoods are classified as "gentrifying."

13. Citywide, the number of cases filed in housing court for non-payment of rent remained fairly constant across neighborhoods between 2005 and 2014.
According to data from the New York housing courts from 2005 to 2014, the rate of non-payment court cases filed per rental unit remained roughly constant in gentrifying neighborhoods, with the exception of an increase around the financial crisis. Non-gentrifying areas consistently saw higher rates of non-payment court filings than gentrifying areas over this time period.

Release Event Broadcast: To mark the release of the State of New York City’s Housing and Neighborhoods in 2015 report, the NYU Furman Center will host By the Numbers: Gentrification on Monday, May 9, 2016 at NYU School of Law. View the research presentation and panel discussion >>