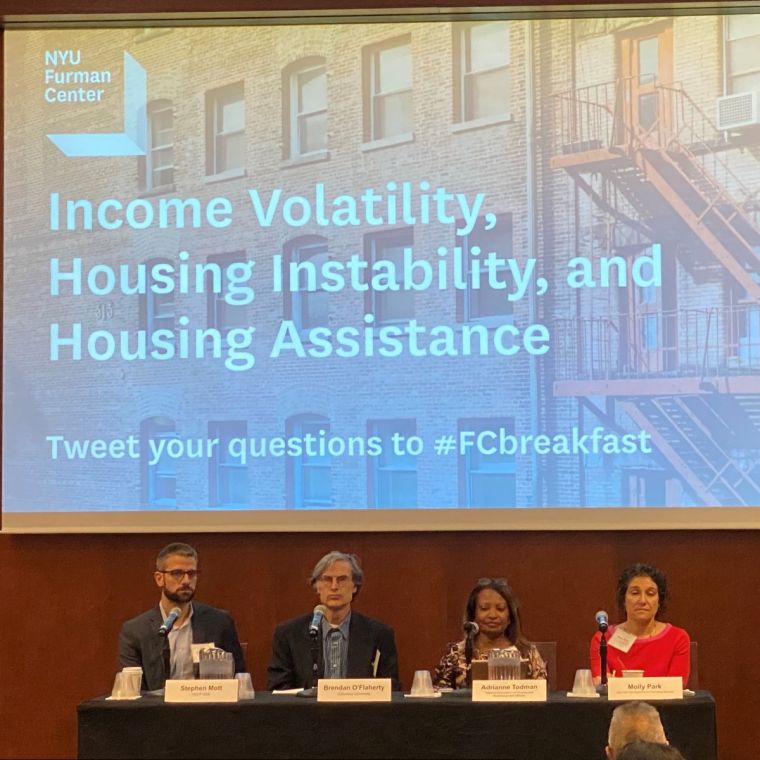 On Tuesday, November 19, the NYU Furman Center hosted a policy breakfast at NYU School of Law’s D’Agostino Hall. At the breakfast, Income Volatility, Housing Instability, and Housing Assistance, panelists discussed the housing challenges associated with income and expense volatility and explored the ways in which current housing policies fail to help families facing those challenges. The panelists also described promising programs that mitigate the housing instability caused by income volatility.

The NYU Furman Center’s Executive Director, Matt Murphy, opened the event with a presentation providing context for the ensuing panel discussion. Today, almost half of the renters in the United States are rent-burned -- that is, they spend at least 30% of their income on housing. Recent decades have seen incomes and housing costs diverge, with incomes rising much more slowly than housing costs, exacerbating housing instability. Housing instability matters to families across the country not only for its own sake, but because it correlates with other outcomes: for example, children living with housing insecurity change schools more often than those who are stably housed, on average, and evidence suggests that housing insecurity is associated with worse health outcomes.

Matt encouraged the audience to view the challenge of general affordability as distinct from that of income and expense shocks. Citing NYU’s Jonathan Morduch’s research on individual families’ financial lives, which indicates extensive within-year (i.e., month-to-month) income volatility, the presentation underscored how current housing programs that aid those with persistently low incomes often fail to help families undergoing income shocks (such as those caused by job loss) or expense shocks (such as those that arise when a family pays funeral expenses after the death of a loved one). Some programs, such as Pennsylvania’s Homeowners' Emergency Mortgage Assistance Program and Washington, D.C.’s, DC Flex program do directly confront income volatility, as do one-shot programs, including New York City’s.

The following distinguished panelists delved into topics introduced in the opening presentation:

The panelists began by reviewing the causes of income volatility, citing hourly work with inconsistent hours, unexpected high medical costs, funeral expenses, and the cost of buying gifts during the holiday season. New York City DHS’s Molly Park noted that when a family’s base income is low, its members have little room to deal with an unexpected drop in income or spike in expenses. Agreeing, HELP USA’s Stephen Mott explained that people with low incomes often manage their finances intelligently, determining which bills to pay when and using credit cards to their advantage. Adrianne Todman, CEO of the National Association of Housing and Redevelopment Officials and former head of the District of Columbia Housing Authority, spoke about how fear distorts decision-making, describing the plight of one woman who did not want to leave affordable housing because she worried about what might happen if she lost her job.

Columbia economist Brendan O’Flaherty observed that fear of volatility affects landlords too. Landlords fear that prospective tenants who are exiting homelessness, when confronted with an income or expense shock, might choose not to pay rent. The risk of nonpayment troubles even mission-oriented housing providers, such as HELP USA. Stephen Mott described mindset of HELP USA’s property managers, who understand that they will not be able to continue providing affordable housing to families in New York City if they do not collect enough rent to make their buildings financially viable.

After discussing income and expense volatility’s deleterious effects on landlords and tenants, the panelists shifted their focus to current housing policies and programs. DHS’s Molly Park explained that our current housing system offers no clear pathway out of affordable housing to middle-income families. Brendan O’Flaherty urged the audience to consider the 30% of income threshold that determines whether a family is rent-burdened. If a family spends 30% of its income on housing, then it has 70% left over for other expenses -- as O’Flaherty trenchantly noted, “Seventy percent of not a lot is not a lot.”

Before taking questions from the audience, the panelists described promising interventions that address the challenges of income volatility, including one-shot cash infusions (e.g., the one-shot program run by New York City’s Human Resources Administration) and a program that affords about 40 public housing authorities greater latitude in creating rent platforms that work better for families living in public housing.

Policy breakfast attendees wanted the panelists to weigh in on security deposits, private market products and services that provide rent guarantees to landlords, the possibility of allowing tenants to use on-time rental payments as a means of improving their credit scores, and whether making Earned Income Tax Credit payments monthly rather than yearly might mitigate volatility. The panelists offered interesting insights into Australia’s strategy for dealing with security deposits (in one Australian territory, landlords are not allowed to leave the territory before turning over their security deposits to the government) and private market solutions (they must decide under what circumstances to make payments to landlords and how much of those payments covered tenants must pay back to third-party intermediaries).