HUD Work Requirements: What They Would Mean for New Yorkers

With a Friday budget deadline looming, Congress has unveiled an omnibus spending bill that, if passed, would avert a shutdown. But it remains to be seen whether proposed rental assistance reform, reported on in February as part of the HUD budget, will be passed.

The proposed reforms would allow public housing authorities and owners of buildings receiving HUD rental assistance to establish work requirements for tenants of up to an average of 32 hours per week for each adult in a household, unless the household is classified as elderly or disabled. Failure to comply would result in the loss of assistance. The proposal does not include an exemption for adults who are caretakers for household members with disabilities or children.

To consider the circumstances of the households that would be affected by these changes, and the possible effects of this proposal were it to pass, the Center on Budget Policy and Priorities (CBPP) published a Chart Book that describes the employment and earnings of HUD-assisted households nationwide. We have partnered with CBPP to provide a similar analysis of the population receiving HUD rental assistance in New York City and New York State, which we show and describe below. 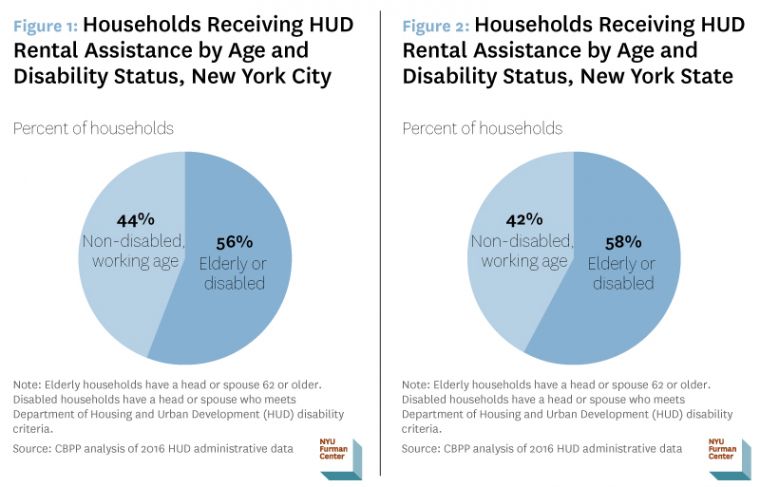 In New York City and New York State, households receiving HUD rental assistance that have gaps in employment are much more likely to live with a child under the age of six or with a person with a disability. 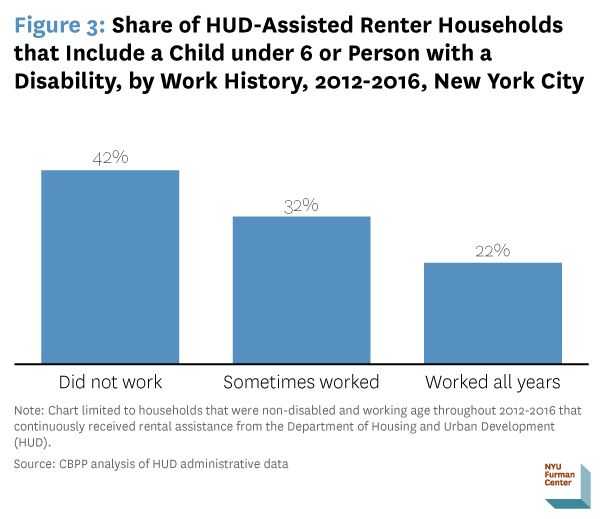 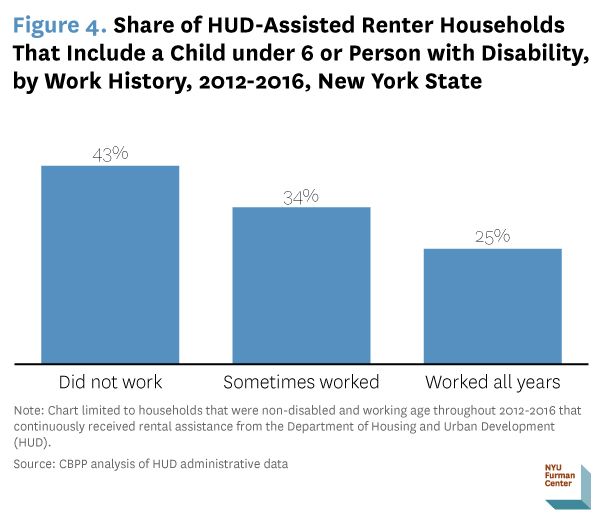 Of all HUD-assisted households considered work-eligible in New York City that did not work between 2012 and 2016, more than one-quarter (28%) included a person with a disability (see Figure 5). The share of households that included a person with a disability was nearly 20 percentage points lower (9%) among similar HUD households that worked some or all of the time during the same period. The statistics were the identical for New York State (see Figure 6). 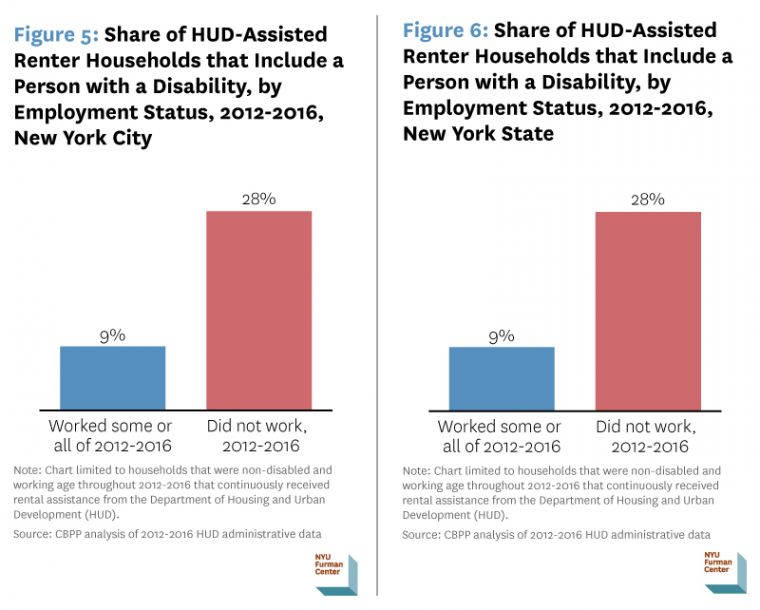 In 2016, a large majority (83%) of working-age, non-disabled, HUD-assisted households in New York City were either working (77%) or were subject to work requirements because they also participate in the Temporary Assistance for Needy Families program (6%) (see Figure 7). Among the remaining households (17%), more than a third were either caring for a child under the age of six or caring for a person with disabilities. The statistics for New York State were almost identical (see Figure 8).

While most assisted households are working, many likely work low-wage jobs with unpredictable and variable hours (see Fischer, footnote 2). As a result, they would be at risk of losing their housing if work requirements were imposed and their employment hours didn’t average out to the required number. 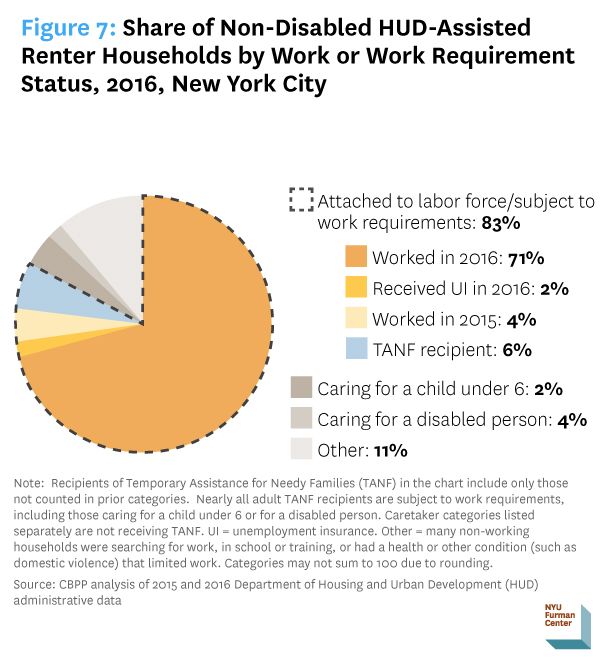 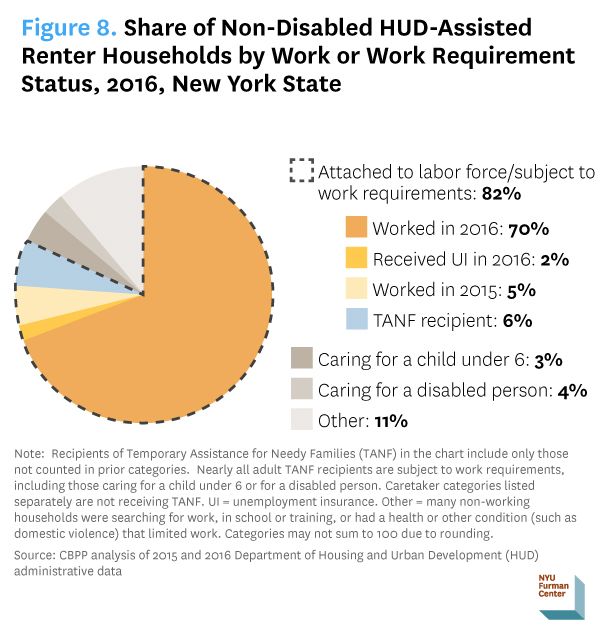 A significant portion of working HUD-assisted households in New York City and New York State are living in poverty. 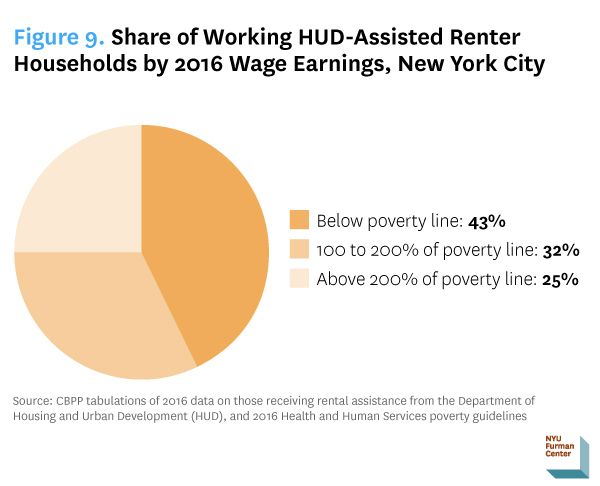 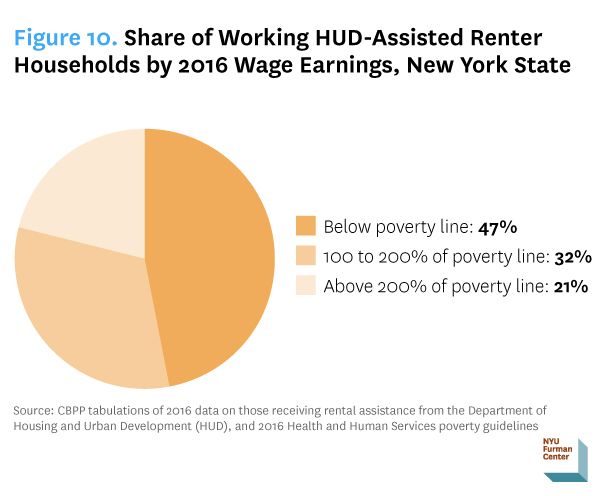 This quick look at the employment profile of New York’s HUD-assisted households suggests that the imposition of work requirements would likely have a significant effect and may put many at risk of losing their housing. However, whether the proposal will be implemented as currently written remains to be seen. The effect of work requirements for HUD-assisted New Yorkers (and their communities) will become clearer after the budget is finalized and HUD provides its specific legislative proposal, expected in March.

Data analysis provided by the Center on Budget and Policy Priorities.

[2] Will Fischer, “Housing Work Requirements Would Harm Families, Including Many Workers,” Center on Budget and Policy Priorities, March 15, 2018, https://www.cbpp.org/research/housing/housing-work-requirements-would-harm-families-including-many-workers.