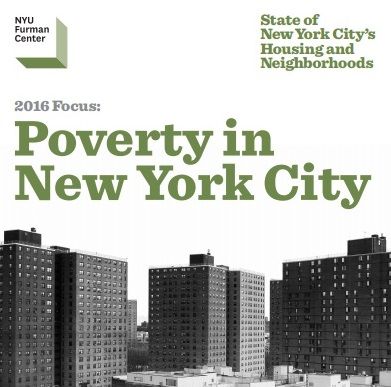 A new report by the NYU Furman Center, Focus on Poverty, analyzes poverty and its spatial concentration in New York City, including recent changes in poverty across neighborhoods and demographic groups. According to the report, neighborhood concentration of poverty has worsened in the past five years, though remains below its 2000 levels. Conditions in high-poverty neighborhoods are starkly different than those in the city’s low-poverty areas.

Since the 1980s, New York City’s poverty rate has generally hovered between 19-21%, and remains higher than the national rate—especially for children and seniors. Using 2011-2015 data, the report finds that nearly 1.7 million New Yorkers were living in poverty.

More than half of the neighborhoods in the Bronx are high poverty or extreme poverty areas, less than 7% are on Staten Island and less than 4% are in Queens.

Read the State of New York City's Housing and Neighborhoods in 2016 or view the indicators on CoreData.nyc.

LAUNCH EVENT: To mark the launch of the report, the NYU Furman Center will host an event, By the Numbers: Concentrated Poverty, on Wednesday, June 7, 2017 from 4:00-7:00 p.m. EDT at NYU School of Law. Open to the public, but advance registration required. Also available on livestream, which will be broadcast from 4:00-6:00 p.m. EDT.

The poverty rate is higher in New York City than it is in the nation, especially for children and seniors.

Poverty concentration—the extent to which poor New Yorkers are living in neighborhoods with other poor New Yorkers—increased in New York City between 2006-2010 and 2011-2015, though remained below its 2000 levels.

Neighborhood conditions vary significantly based on the level of poverty in a neighborhood. Higher poverty neighborhoods have higher violent crime rates, poorer performing schools, and fewer adults who are college educated.

Poor black and Hispanic New Yorkers are much more likely to live in higher poverty neighborhoods than poor white and Asian New Yorkers.

Children are more likely to live in higher poverty neighborhoods than adults or seniors.