Characteristics of Local Schools Near Families with Federal Housing Assistance 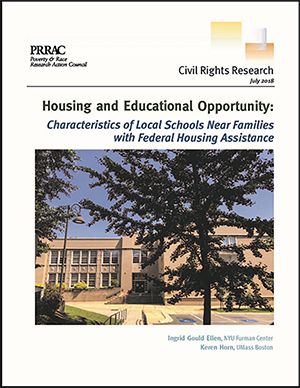 NYU Furman Center Faculty Director, Ingrid Gould Ellen, recently co-aothored a report with Keren Mertens Horn on the characteristics of local schools near families with federal housing assistance. In collaboration with PRRAC, UMass Boston and the NYU Furman Center, the authors compared the profile of the schools accessible to HUD-assisted and LIHTC households in 2016 to the profile of those accessible to other similar households within the same state or metropolitan area.

The report finds that a greater share of families receiving all four major types of federal housing assistance lived near lower performing and higher poverty schools than other poor families with children as well as other renters with children. Among assisted families, those living in public housing lived near the most disadvantaged schools while those living in LIHTC developments lived near the least disadvantaged.

Another finding of note is there are large differences by race within the voucher program, with black and Hispanic voucher holders living near significantly lower performing and higher poverty schools than white voucher holders.