Allocation of the Limited Subsidies for Public Housing 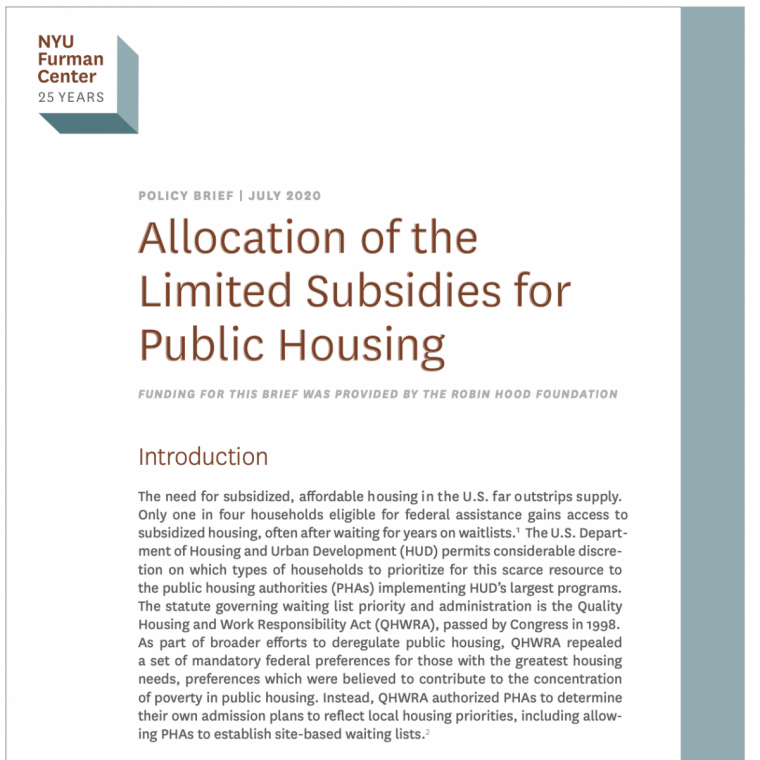 Public Housing Agencies (PHAs) face higher demand for their units than their available stock. This means that waiting lists are long and policies to prioritize access to certain groups become a crucial tool to allocate housing in a way that benefits those who most need it. PHAs didn't always have this tool at their disposal. Before the passing of the Quality Housing and Work Responsibility Act (QHWRA) in 1998, federal regulations required public housing units to be prioritized for those with the greatest financial need. The legislation gave PHAs the ability to prioritize access based on local priorities.

The analysis looked at PHAs in three different cities: Cambridge, MA; Phoenix, AZ; and Detroit, MI. In each case researchers developed a waitlist model to simulate and measure changes in the assisted population when prioritizing each one of the following four groups:

The simulations found that income-based priority has much larger effects than priorities for elderly or family households. Giving households with an income below 30 percen of AMI preference in the simulations, results in nearly all of public housing residents having incomes below 30 percent of AMI -- between 96 and 100 percent across the three cities. When prioritizing households with income between 30 and 80 percent of AMI, the proportion of that group that had access to public housing increased and conversely, the proportion of the below 30 percent AMI group decreased, by between 19 to 35 percentage points.

While prioritizing extremely low-income households greatly increases their access to public housing, in doing so it also creates highly concentrated poverty within public housing developments. However, the extent of the overall concentration of poverty in a community is not only determined by poverty within the public housing project, but also by  the levels of poverty of the surrounding neighborhood. Researchers found that families in public housing lived in census tracts where poverty levels among non-public housing neighbors were quite high (50 percent for Detroit, and 41 percent for Phoenix). In contrast, public housing households with children in Cambridge lived in census tracts with a poverty level of 19 percent among non-public housing residents, meaning that children living in public housing could potentially  benefit from access to resources associated with lower-poverty neighborhoods. Therefore, the ultimate effect of prioritizing lowest-income families on poverty concentration will vary somewhat across jurisdictions.

While prioritizing households in terms of income had large effects on the income levels of assisted residents, it had almost no effect on  the racial or ethnnic composition of residents. Prioritizing higher-income households, for example, typically did not affect the race or ethnic share of residents by more than 2 or 3 percent. Although the white population represents a greater percentage of eligible higher income residents, an offsetting factor was their lower likelihood of choosing to live in public housing; hence, their proportion of residents did not increase significantly when that income group was targeted for access.

Allocation priorities had much less effect when based on household composition. The simulations found that targeting seniors has only a modest effect on increasing their access to public housing. That increase comes primarily at the expense of another group that typically requires a similar sized apartment: the non-elderely disabled. This highlights that trade-offs in who gets access under different prioritization plans work through who is competing for similar sized units of public housing (one-bedroom and studio apartments, in this case).

Finally, and perhaps most surprising, prioritizing households with children results in almost no increase in the proportions of such households in developments. To emphasize, prioritizing all income-eligible families with children over all other eligible households, resulted in no more than a 2 to 3 percentage increase in their presence in public housing. This too is driven by the availability of appropriately sized units (usually  units with 2 or more bedrooms for families), and the fact that those units are occupied by other families with children. Indeed, prioritizing households with children results in only a very small decline in the proportion of elderly tenants because the elderly usually require smaller 1-bedroom or studio apartments. In this case, the priority has very limited effects due constraints in the physical configuration of units.

This analysis reveals that prioritizing access to public housing has significant ramifications on the presence of certain groups and the absence of others when targeting is done according to income levels; and on the contrary, the effect is minimal when the targeted group require a particular type of unit–as is often the case with families or the elderly–because the size-composition of the public housing stock plays a large role in determining access to public housing.