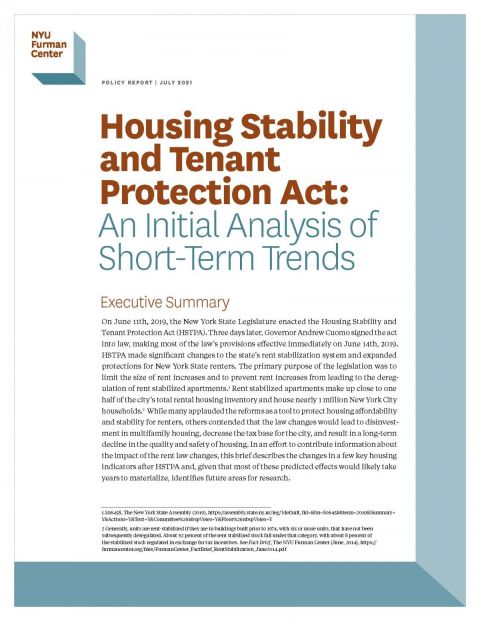 On June 11th, 2019, the New York State Legislature enacted the Housing Stability and Tenant Protection Act (HSTPA). Three days later, Governor Andrew Cuomo signed the act into law, making most of the law’s provisions effective immediately on June 14th, 2019. HSTPA made significant changes to the state’s rent stabilization system and expanded protections for New York State renters. The primary purpose of the legislation was to limit the size of rent increases and to prevent rent increases from leading to the deregulation of rent stabilized apartments. Rent stabilized apartments make up close to one half of the city’s total rental housing inventory and house nearly 1 million New York City households. While many applauded the reforms as a tool to protect housing affordability and stability for renters, others contended that the law changes would lead to disinvestment in multifamily housing, decrease the tax base for the city, and result in a long-term decline in the quality and safety of housing. In an effort to contribute information about the impact of the rent law changes, this brief describes the changes in a few key housing indicators after HSTPA and, given that most of these predicted effects would likely take years to materialize, identifies future areas for research.