Roger Andersson, my colleague at NYU Law School’s Straus Institute this academic year, makes a powerful case for the insights gained from taking a comparative approach to tackling racial and ethnic segregation, pointing to the benefits of an outsider’s perspective in making the ignored more visible, and the impossible much more plausible.

Yet the reality is that this type of comparative perspective is the exception rather than the rule. Why do American race and ethnic equality scholars and practitioners not use comparative approaches more frequently?

Roger, indirectly, suggests several reasons: that U.S. scholars may (wrongly) think that there is no equivalent scholarship to engage with elsewhere; Or that the ideological preferences are so significantly different as to make the suggestions that policy from one jurisdiction might lead to policy change in another seem quixotic.

But I’m interested more in thinking aloud about the line near the end of Roger’s blog: "I have learned," he writes, "that if anything sounds like a progressive political idea, it will probably be ruled unconstitutional." A rhetorical flourish, perhaps, but it does raise an interesting question.

Here is the puzzle: There seems to be a considerable degree of pessimism about the future of U.S. law as a progressive force and its ability to address the deep seated inequalities in this society, particularly racial inequalities.  With some notable exceptions, however, there seems to be very little sense that it is worthwhile looking beyond the United States for ways forward.

Two caveats seem appropriate at this point.  The first is that my discussion of American legal insularity in addressing inequality and continuing segregation is directed primarily at the central problem of American race discrimination law, rather than in other areas involving race such as immigration policy, in which comparative approaches are more common.

The second caveat is that some ‘newer’ areas of American equality law, such as sexual orientation, have drawn on more comparative thinking than ‘older’ areas. But the issue of race still so dominates the discussion of American law dealing with inequality as to make it appropriate to treat it as the central case.

The main explanation put forward for insularity in this context is geo-political: that it is a characteristic of the global hegemon in any period of history not to look outwards, except to teach and influence.

Another explanation may lie in the scale of the United States itself, and the range of experiences to be found here—why look outside given the range of differences inside the country?

Race equality law insularity may also simply reflect American legal insularity more generally. The absence of comparative approaches in American anti-discrimination law is just an example of a general phenomenon of insularity in American law, both in practice and in the academy.

Whilst possibly partially convincing, these explanations do not account for the continuing insularity in race equality law even as other areas of antidiscrimination law engage somewhat more with international developments.

The second distinction I want to draw is between comparison for purposes of transplantation—to bring about change in US law —versus comparison for the purpose of better understanding the critical features of your own system.  Comparison may be useful outside of the transplant model.

So how do these distinctions help us explain the relative absence of comparison? First, history: In inventing the new system in the 1950s and 1960s, there were few, if any, external models on which to rely in those critical decades of the 1960s and 1970s, leading to a significant degree of self-reliance, and given its origins, therefore, it is hardly surprising that this approach has continued. Transplantation wasn’t possible, so U.S. scholars and practitioners looked inwards.

The violent backlash against this form of law and the significant changes that it brought about further encouraged an inward looking stance, in which the main preoccupation was seen as defending what had been achieved, rather than looking for new approaches from outside the United States.

The current absence of comparisons seems significantly driven, also, by liberal scholars’ ideological identification with the civil rights movement, and an implicit understanding that their scholarship should serve the interests of progressive politics. Only where comparative work appears to serve those interests in the short term does it tend to appear, and in many cases it may not.

In most cases, a significant reason for American anti-discrimination law’s domestic focus stems quite directly from contemporary judicial approaches to the Equal Protection Clause. Recent U.S. Supreme Court interpretations of equal protection provide a largely insurmountable structural barrier to the comparative project that Roger refers to in the sentence quoted earlier.  The United States is thought simply not to be able to do lots of things that are done elsewhere because the Constitution (as presently construed) doesn’t let you.

Race equality law scholars appear to consider that providing a very different legal approach or example from another country would have little persuasive impact on the current Supreme Court. Put another way, the reason why the bulk of race equality law scholars do not look externally is that they are being pragmatic and see themselves as constrained by what seem to be plausible approaches for transplantation into U.S. courts.

Is the neglect of foreign anti-discrimination law desirable, from the viewpoint of either scholars or activists? I think not. Excluding comparative experience may end up excluding the kind of longer-term lateral thinking that might help address the problem. The paradox of adopting a comparative approach is that its principal utility may lie in helping us to understand our own system better: the questions it raises can be profoundly transgressive, as no doubt Roger intended his comments to be in the American context. More, please! 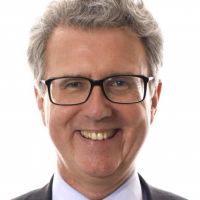 Chris McCrudden is Professor of Human Rights and Equality at Queen's University Belfast, and the William W. Cook Global Law Professor at the University of Michigan Law School.