The demographics of Bedford-Stuyvesant are changing. According to data from the Furman Center, the percentage of White non-Hispanic residents in Bed-Stuy has grown from 2% to 16% between 2000 and 2011.  The percentage of Black residents fell from 75% in 2000 to 61% today , with Latino (19% in 2000, 18% in 2011) and Asian (1% in 2000, 2% in 2011) residents’ percentages remaining more stable.  During this same period, the crime rate decreased and the percentage of children scoring at grade level in math more than doubled (Furman Center, 2012).  These outcomes seem positive from an integration perspective:  the community is less racially isolated, crime is decreasing, and children’s achievements are growing.  But Bed-Stuy is described as “gentrifying” rather than “integrating.”  And it seems like activists are more likely to be protesting and significant percentages of residents of the neighborhood worrying rather than celebrating.

Gentrification is not equated with integration even if in literal terms, a neighborhood’s demographics have become more racially, ethnically, and economically diverse.  The reasons are myriad, but generally people focus on two related but distinct phenomena:   forced displacement and imposed culture shift.

These concerns are not illusory – as anyone who has spent time in Bed-Stuy or neighboring Crown Heights, Brooklyn recently can attest.  According to one caricature, when gentrification occurs, “Housing prices balloon; boutiques and bistros blossom; and before you know it, some bearded dudes in vests have bought the local bodega and opened a saloon festooned with taxidermied animals” (Sternbergh, 2011). While the image is ridiculous, the perceived loss to the longtime residents is not. This pain of loss of community and the harm of lost autonomy are well-recognized from eminent domain literature.

As a long-time civil rights lawyer and Brooklyn resident, I ardently support integration.  But I worry deeply about gentrification.  The distinction in my mind is choice: between scenarios in which people of all races and ethnicities choose to live in a racially and economically integrated neighborhood or town – and scenarios where only the affluent (who are often White) have the means to make choices.

But I think we need to move beyond familiar anti-gentrification and pro-development binary.  Residential change in neighborhoods is inevitable whether a neighborhood gentrifies or not. The forced exit of sizable numbers of community members is harmful both to them and to those who remain.  The problem is that gentrification currently causes nonconsensual exit—and, as such, threatens the autonomy of the displaced in a way that is unlike a choice to move.  The goal, I think, is to recognize a broad scope for those who have a stake in a neighborhood and to devise mechanisms for ensuring the autonomy of current in-place residents.

The ideal response is a vehicle that allows in-place residents to remain but also allows them to choose whether to leave, rather than being involuntarily displaced. Such a vehicle would seem to blunt the criticism that gentrification is an illegitimate invasion by outsiders, and it would transform gentrification into a mechanism by which truly fair housing can be furthered.

Cities—with the help of the federal government—have the option of creating such a vehicle—and indeed they have when using eminent domain powers against owners. I argue that cities like New York, borrowing from eminent domain remedies and federal government mobility programs operated by the Department of Housing and Urban Development (HUD), should use rental vouchers or low-interest loans to restore the autonomy of in-place residents, providing them with viable, self-determining options to remain or exit the neighborhood. Indeed, the Fair Housing Act legally obligates HUD and its grantees to “affirmatively further fair housing,”[1] and HUD has funds available to fulfill this mandate. The current absence of true autonomy and choice for in-place residents of gentrifying neighborhoods threatens the legitimacy of any integration that may occur as a result of the influx of new residents.

Why Should Gentrification Trigger Government Action?

Many will assume that the displacement and other outcomes that occur in the wake of gentrification are simply the result of peoples' choices expressed through the market - in which case, the argument goes, government intervention is not appropriate.  Others will be of the view that government has a role to play whenever vulnerable populations are at risk of adverse consequences.  People can fall on either side of this debate and still, I would argue, be persuaded that government has an obligation to act in the context of gentrification because the evidence is overwhelming that the current harms of gentrification follow directly from government action.

In the context of urban neighborhoods, the decline in property values that occurred following World War II was a direct consequence of decisions made by the federal government, bankers, and real estate brokers. The private hand of the market was consciously manipulated in ways that caused a decline in property values and in the quality of life in urban neighborhoods.

The “up-scaling” of reasonably stable urban neighborhoods alters the current aesthetic and uses norms of a particular area. The existing land use legal toolkit, however, is rarely at play to protect community interests. Two simple, but important, differences are scale and political power. Accordingly, when “gentrification” begins—when outsiders with more capital move into neighborhoods their ilk once abandoned--the current residents have to counter the political might of the extant middle and upper class of the city.

In addition, gentrification often does not require zoning changes. This means that in-place residents of gentrifying neighborhoods lack many of the current land use controls that others utilize to protect their autonomy, and new devices are needed to afford that protection.

The first issue in structuring protection for in-place residents is how to determine when gentrification is occurring. I would suggest three metrics for determining when gentrification may be at play:   increased rents and home-purchase prices and a shift in the income level of residents.  For many concerned about gentrification, the most obvious signal is the growing number of high-income Whites moving into their neighborhood, but for constitutional and other reasons, linking the trigger for gentrification to the percentage of people of a particular race is a nonstarter.

New York City requires careful attention to the data because of the presence of rent-controlled, rent-stabilized, and public housing in neighborhoods which can artificially depress the median rents.  So at first glance, it appeared that Bed-Stuy’s rental rates actually decreased slightly (1.79%) between 2009 and 2011.  Once we disaggregated market rate housing, however, the picture changed dramatically:  Bed-Stuy had a 48% increase in market rate rents between 2002 and 2011 with 12.7% of the increase between 2008 and 2011.

However we define the gentrification trigger, the next question is what tools a city might employ to preserve the autonomy of renters? Obviously, one option is simply to reimpose rent control or stabilization more widely.  I would suggest, however, that this move is flawed because it only preserves the renter’s ability to stay.

The rental voucher or low-cost loan would directly address the displacement concerns. Any long-term resident (or their children) would have the option of remaining in the neighborhood. And while perhaps paradoxical, I argue that such a voucher or loan option should also be transferable out of the neighborhood, which would offer true choice and autonomy for in-place residents. When long-term residents or business owners and their children have choice and autonomy, the anger over any change to the culture of the neighborhood would seem to be quelled.

Once current residents have a choice of whether to stay or move, there is the potential for residents to organize and to persuade other residents and business owners to stay. If many current residents and business owners were to remain, the retail offerings and street life would likely not change in any meaningful way. Or if they did, the change would occur on the residents’ own terms. If too few people stayed, those who remained might feel a sense of loss but not, presumably, a sense that outsiders pushed out their neighbors.

If most voucher holders remain, one presumes the gentrification cycle would either slow down considerably or halt altogether. Gentrifiers tend to come in waves—artists and others seeking low rent and an “authentic” community, families seeking diverse neighborhoods, and then, as amenities follow, wealthier families whose capital drives the housing costs and retail demands even higher. If most in-place residents remain, however, a lack of supply would prevent the subsequent waves. Although this harms the economic interests of landlords, in gentrifying neighborhoods, rental properties were among those that were devalued by the disinvestment and abandonment and so landlords would have been able to buy very cheaply initially, which mitigates any equity concerns.

Why should the federal government play a role in facilitating these vouchers?  To respond to its legal obligations under the Fair Housing Act of 1968. Congress required HUD and its grantees to do more than combat private housing discrimination. In recognition of HUD’s own legacy of segregation, HUD has a mandate to actively promote integration

Government played a significant role in creating the conditions that led to the harms of in-place residents; therefore, government at the city and federal levels ought to lead the effort to eliminate the aspects of gentrification that generate the most intense opposition. And given HUD’s mandate, cities experiencing gentrification should have the option of seeking HUD funds to counter the current dynamic, which currently continues the cycle of denying autonomy to residents of urban neighborhoods.

Neighborhoods undergoing gentrification generally experience significant influxes of private wealth and political clout. This combination tends to generate increased commercial activity and governmental services and amenities. If in-place residents have the financial means to remain, they will ideally be able to benefit from the employment opportunities, educational opportunities, and other quality of life improvements that are precisely the qualities HUD seeks to incentivize in its pursuit of “Mixed-Income Communities of Opportunity.”  Accordingly, the federal government should be encouraged to expend funds to transform gentrification into a strategy for affirmative furthering fair housing, rather than allow it to continue as yet another racialized dynamic that denies autonomy to the Black, Latino, and Asian-American families that remained in the neighborhoods were hard hit by the policies of last century.

New York City is perfectly positioned to experiment with mobility vouchers or other mechanisms to recognize the interests of long-time residents of newly popular neighborhoods.  The Mayor is committed to affordable housing and protecting those who have not prospered in the two last decades.  I worry that if action is not taken soon, we will once again have trammeled the autonomy of long-time residents of Bed Stuy, Crown Heights, and other “up and coming” neighborhoods.   The residents of these neighborhoods experienced decades in which their neighborhoods were synonomous with urban crime and racial tension.  The discovery of the beautiful homes and access to transit by affluent young families should not be at the expense of families who maintained the neighborhoods during those years. 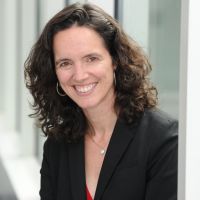 Rachel D. Godsil is the Eleanor Bontecou Professor of Law at Seton Hall University School of Law and is a co-founder and research director for a national consortium of social scientists and law professors focusing on the role of implicit bias in law and policy.