A Case for Choice: Looking at Connecticut 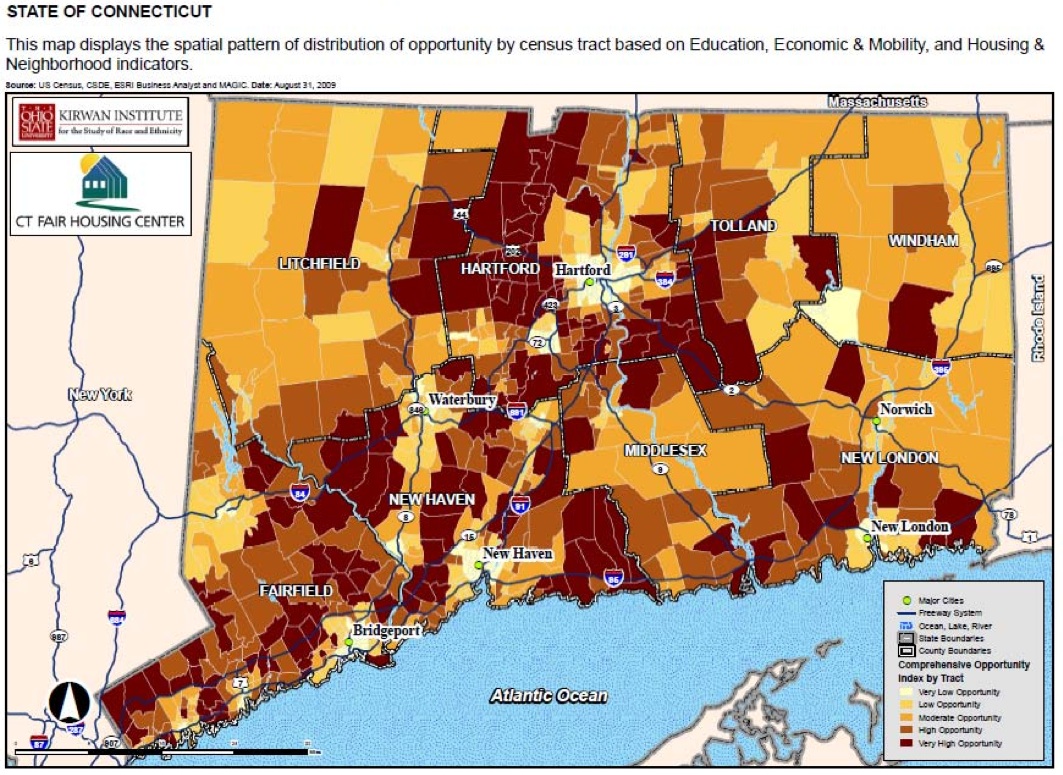 By a number of different measures, Connecticut is one of the most ethnically, racially, and economically segregated states in the country.  Segregation has created neighborhood environments that are starkly different in terms of school quality, public safety, and job access, just to name a few.  As assessed by the Kirwan Institute, 81 percent of Blacks and 79 percent of Latinos live in lower opportunity areas, compared to 25 percent of Whites and 44 percent of Asians.[1]

Affordable and subsidized housing, which could potentially provide access to higher opportunity neighborhoods, is simply not available at sufficient levels in areas where schools are thriving and streets are safe.  Only 31 out of Connecticut’s 169 towns have at least 10 percent affordable housing as defined by state law.[2]  Other factors, such as the incentive structure of the Housing Choice Voucher program, also severely limit housing choice.

The location of units created with the assistance of the Low Income Housing Tax Credit Program (LIHTC) is typical of patterns in other forms of subsidized housing that we see in Connecticut, where upwards of 70 percent of government housing subsidy program units are located in the 6 percent of the state that is minority-concentrated. Likewise, 40 percent of LIHTC units are in the 1 percent of the state that qualifies as Racially and Ethnically Concentrated Areas of Poverty (RECAPs) as defined by HUD, again similar to patterns in other housing programs.

Many interests, such as well-intentioned efforts to revive struggling neighborhoods and blatant efforts to keep low income and people of color out of thriving suburban communities, converged to generate development after development in areas of minority and poverty concentration, which in turn deepened minority and poverty concentration.  It is striking that in the Hartford region, every single area that was redlined by the government in 1937 is a very low opportunity area today. 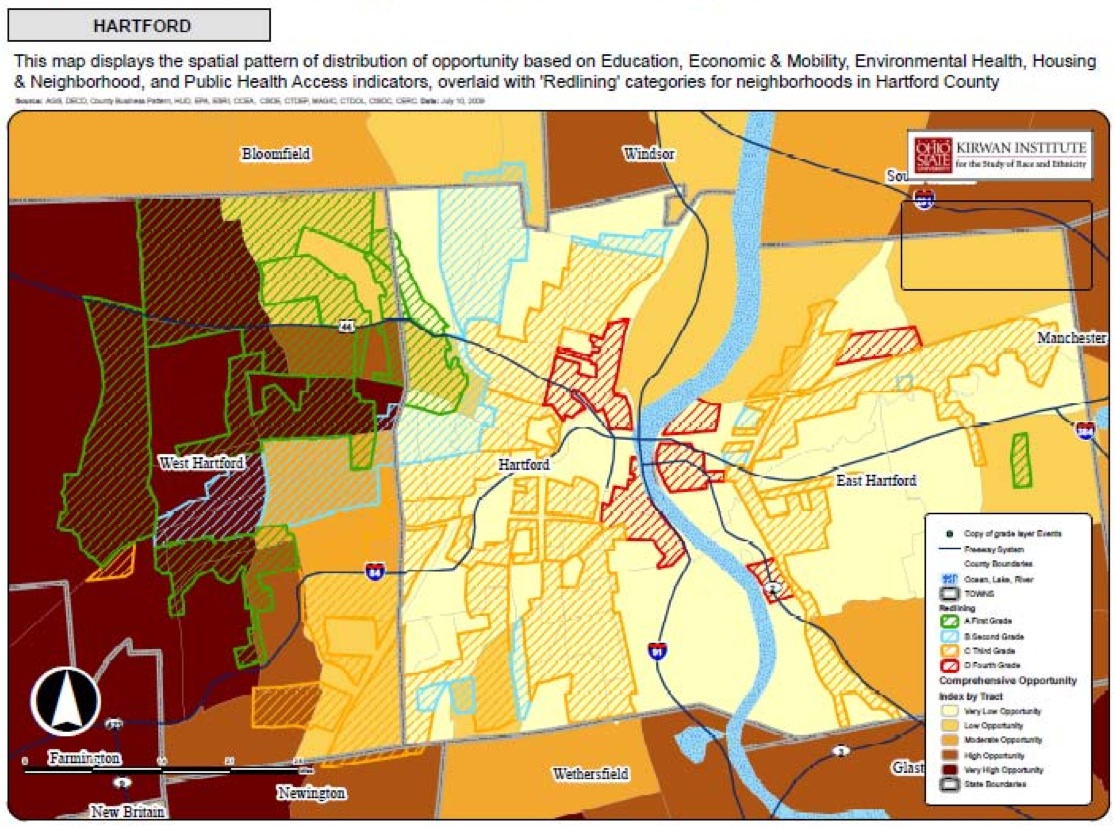 We can debate what the proper balance is for high versus low opportunity area housing subsidy placement, but clearly we are far from striking that balance now.  In crafting a solution, we must work to undo the decades of policies that created deep imbalance in the distribution of opportunity.  Fair housing advocates strongly support investment in and improvement of neighborhoods harmed by histories of disinvestment.  What we object to is the continuing disproportionate placement of low-income housing units in such neighborhoods, which perpetuates segregation, further concentrates poverty, undermines community reinvestment, and deprives families of the opportunity to choose housing in lower poverty areas.

Some have argued that many families might choose to remain in more racially, ethnically, and poverty concentrated areas.  I wholeheartedly agree that this should be an option.  What is missing, however, is the ability for low-income families of color to have any kind of real choice between staying and moving to a neighborhood that is less concentrated – and many families desperately want to make such moves. In 2012, Professor Stefanie DeLuca of Johns Hopkins and I gathered Housing Choice Voucher Holders in CT together to discuss housing choices.  Two things were apparent from these discussions:

Many people wanted to move but could not.  Primary motivating factors for moving were a fear for children’s health and safety and a desire for a quality education.
There was clear consensus, even among people who did not want to move, that there should, at an absolute minimum, be a choice.

So how do we address this along with other concerns like preserving hard units of subsidized housing and revitalizing struggling areas?

1. Understanding Connections: One initial step is to understand that these goals of revitalizing struggling areas and fostering access to opportunity are connected.  Unless we plan, build, and design programs with choice as the centerpiece, we will continue to invest in struggling areas in a manner that fails to produce serious life improvements at best or, at worst, displaces people only to reconstitute areas of poverty concentration elsewhere.  By setting the stage for voluntary poverty de-concentration, we will allow our revitalization efforts to convert lower opportunity areas into areas with greater access to resources critical to success in life.  In this sense, the solution is not a zero sum game – it is simply a smart strategy.  Consider again the redlining/opportunity map of Hartford.  While millions of dollars have been invested in failed efforts to “revitalize” Hartford since 1937, no serious money has been spent to create housing choice.  Hartford remains the 4th poorest city in the country.  It needs investment and community development that goes beyond subsidized housing.
2. Let’s Get on the Same Page and Advocate Together: Another crucial point to recognize is that much of the challenge is rooted in an overall lack of affordable housing.  There are many heroes on the housing movement who have dedicated their lives to finding the funding necessary to address this critical need and yet the shortage of affordable housing continues to grow.  The more advocates can come to some consensus on the issue of choice, the more we can move on together to push for more housing resources.  It is important to also recognize that a portion (although certainly not all) of the need for affordable housing is generated by exclusionary zoning and other restrictive policies, which have blocked the creation of affordable housing in higher opportunity areas.
3. Learning from Each Other: My experience as part of a Sustainable Communities Initiative grant in the Hartford region made it clear to me that there is a lot that affordable housing proponents, town and regional planners, developers, and fair housing advocates can learn from each other.  Fair housing advocates need to understand the dire housing need, cost considerations, transportation factors, and political considerations that drive where housing is currently placed in order to either challenge underlying assumptions or better craft solutions that meet both the needs of partners and fair housing policy priorities.  For example, here in Connecticut some of the resistance to higher opportunity housing was coming from stakeholders who believed there were no employment opportunities in the suburbs. By analyzing data on job trends fair housing advocates were able to demonstrate that, in many areas, jobs were only growing in higher opportunity suburbs.  Thus, higher opportunity affordable housing would actually bring low-income families closer to jobs.  As another example, conversations with developers revealed how insurmountable zoning barriers are in some towns, prompting exploration of ways to create higher opportunity affordable housing that can fit even highly restrictive zoning regimes (such as the purchase of scattered site properties).
4. It Takes a Movement and Legal Advocacy:  Politics matter.  Those of us who care about fair housing and housing choice must continue to improve how we present the data, information, and personal stories so as to help policy makers and the general public understand that housing is not just a roof and four walls but a significant driver of life outcomes, primarily because of its location. Through making these links, we will gain greater support, not just for more affordable housing, but for more equitably located affordable housing. That said, when education and advocacy efforts are insufficient, we must be prepared to bring legal action. In many parts of the country, it is people who are in the minority racially or ethnically who experience the most negative effects of imbalanced housing policy. It is critical that a sharp and ready tool in our toolbox remain the fair housing laws that are intended to prevent this de facto violation of civil rights.

[2] Connecticut General Statute Section 8-30g, the Affordable Housing Appeals Act, creates a builder’s remedy for proposals to build housing with at least 30% affordable units are rejected by towns with less than 10% affordable units.  Under the Act, housing that is counted toward the 10% exemption includes: any housing created with government assistance, housing occupied by people qualifying for and using government housing assistance, housing purchased with the help of a State-financed mortgage, housing that is deed restricted for people earning 80% of median income or less paying 30% or less of their income towards rent, and similarly deed-restricted mobile homes and accessory apartments. More on the Act here.

Erin Boggs, Esq. is the Executive Director of Open Communities Alliance, a Connecticut-based non-profit that promotes access to opportunity in partnership with an urban-suburban interracial coalition.